‘The War With Grandpa’ is a mixed bag

The War With Grandpa

Critical rating: 2½ stars out of 4

That’s right, “The War With Grandpa” tells the story of Peter, a precocious sixth-grader who gets worked up when his mom, Sally (Uma Thurman), and dad, Arthur (Rob Riggle), force him into the attic so Grandpa Ed (Robert De Niro) has a place to sleep. Ed doesn’t want to displace Peter, but a bad encounter with a self-checkout machine convinces Sally that her recently widowed father needs to be closer to family. Since Ed is an old man and Peter’s sisters – Mia (Laura Marano) and Jennifer (Poppy Gagnon) – share a room, the kid draws the short straw.

One might expect a youngster to get excited by the prospect of an extended stay from Grandpa, but Peter is more selfish than the average kid. This is a problem area in the script, but viewers should feel some sympathy because Mom and Dad don’t have the decency to fix the leaky roof in Peter’s new home in the attic.

I can’t help but think most sixth-grade boys would dig the prospect of converting an attic to a living space, but not Peter. After going to war with a huge bat (Mom and Dad didn’t clear that out either), he decides it’s Grandpa who needs to pay. So, Peter makes a formal declaration of war … and Ed buys in. Pretty soon we’re witnessing a May-December prank-fest with countless pratfalls, significant property damage and, of course, a little grandpa-grandson bonding.

Anyone who has seen more than a dozen family films knows where this one is headed as soon as it starts … because the other possibilities are hopelessly dark, and “The War With Grandpa” is only dark if you stop long enough to think about it. Director Tim Hill, who brought us “Hop” and “Alvin and the Chipmunks,” is not the sort to do gloomy. His films are bright and cheerful, and “The War With Grandpa” is clearly meant to be a warm, slapstick comedy about a friendly feud. The movie IS entertaining.

De Niro and Thurman are too good – and too famous – to be in a picture like this. The same can be said for Christopher Walken, who appears in several key scenes as one of Ed’s buddies. These actors elevate the movie to a degree, and I admittedly laughed, probably more than I should have.

That said, “The War With Grandpa” is not objectively good. It mixes TV comedy plotting with an A-list cast and thematic elements that are slightly disturbing. It’s hard to like a kid who won’t willingly give up his room to a senior who is nothing but kind to him. The physical comedy is also harder to laugh at knowing the real-world outcomes of virtually every stunt would be an extended hospital stay for Grandpa, likely followed by a permanent spot in a senior home.  And that analysis allows for the rather optimistic assumption that Grandpa would survive. Yes, this war is extreme.

I do understand this is a movie and suspension of disbelief is part of the game. If you are willing to embrace a cinematic world where Grandpa can fall from towering heights without winding up in a coma and where Peter is too dim to see this as a horrifying possibility, “The War With Grandpa” is sort of fun. It also includes the requisite sappy finish and condemnation of war that youngsters need to see. Both are handled awkwardly, but they are better present than not.

Although Mom and Dad never address the terrible condition of Peter’s attic room, we are led to believe there is love in this family. We also see that Peter’s war puts a spring in Ed’s step that wasn’t always there. In other words, if you read the film the way Hill wants, it’s sweet. We just have to hope real-world sixth graders know they shouldn’t duplicate these stunts at home.

Should you watch? That depends on how desperate you are for family entertainment. There are worse ways to spend 90 minutes, but that means there are better ways as well.

This week’s home video releases are anchored by another Middle Earth adventure from director Peter Jackson.

END_OF_DOCUMENT_TOKEN_TO_BE_REPLACED 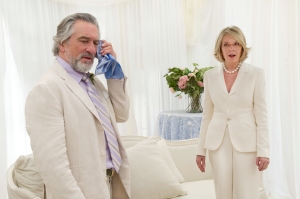 This week’s biggest home video releases have a lot of star power, but they are unfortunately light in more important areas.

END_OF_DOCUMENT_TOKEN_TO_BE_REPLACED

Gina Carano gets physical in “Haywire,” an action-oriented thriller directed by Steven Soderbergh.

After several slow weeks, the home video scene is picking up steam. New releases include an action film by director Steven Soderbergh, a musical comedy starring Queen Latifah and Dolly Parton, and a star-studded offering from director Garry Marshall

END_OF_DOCUMENT_TOKEN_TO_BE_REPLACED

Only two major theatrical releases are making their way to video this week. One is a throwback to 1980s romantic comedies. The other is a stylized thriller starring Bradley Cooper.

END_OF_DOCUMENT_TOKEN_TO_BE_REPLACED

The first week of the new year is bringing several noteworthy films to home video, including two horror flicks, a mainstream comedy and a Robert Rodriguez action-thriller.

END_OF_DOCUMENT_TOKEN_TO_BE_REPLACED

This week’s video releases cover a lot of territory, with everything from a teen-vampire thriller to a family drama starring Robert DeNiro hitting rental store shelves.