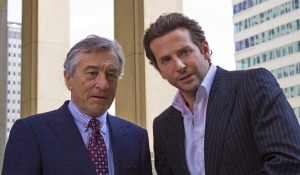 Only two major theatrical releases are making their way to video this week. One is a throwback to 1980s romantic comedies. The other is a stylized thriller starring Bradley Cooper.

It’s common knowledge that human beings only use a small percentage of our brains, leading one to believe that, under the right circumstances, we could be much brighter than we are. “Limitless” explores this concept by introducing Eddie Mora (Bradley Cooper), a writer who is struggling both personally and professionally. Just when it seems he’s hit rock bottom, Eddie is introduced to a drug that allows him to harness every ounce of his brain’s processing power.

Suddenly, he’s cranking out elegant book chapters as though he were reciting the alphabet. He’s also learning foreign languages in a matter of days and playing the stock market like a violin. It seems like heaven … until Eddie learns that the drug comes with severe side effects, not the least of which is a bunch of nasty guys who want to steal it from him.

Director Neil Burger (“The Illusionist”) handles his story deftly, serving up a clever, modern thriller that entertains while making fascinating statements about human nature. Cooper is outstanding in the lead role, and he gets decent supporting turns from Robert De Niro, who plays a hard-nosed business executive, and Abbie Cornish, who portrays his on-again-off-again girlfriend.

The movie’s only real flaw is that it rushes to conclusion, leaving troubling plot threads behind and making one wonder if the filmmakers ran out of money and had to wrap things up prematurely. This doesn’t ruin the film, but it does diminish it.

DVD and Blu-ray extras include a couple making-of shorts, an alternate ending and an unrated, extended cut.

If Topher Grace had been born a decade earlier, he would have been an ideal substitute for John Cusack in 1980s teen-angst movies like “Say Anything” and “Better Off Dead.” Apparently, he’s aware of that fact because “Take Me Home Tonight” is an unapologetic tribute to the genre, and Grace not only stars, he was a producer and contributor to the story.

Like so many ’80s comedies, the film is built around a character that hasn’t found his place in the world. In this case it’s Matt Franklin (Grace), a smart and charming twenty-something who is still working in a Los Angeles-area music store despite holding an engineering degree from the Massachusetts Institute of Technology.

Matt’s dad (Michael Biehn) is badgering him to do something more with his life, but Matt isn’t a man of action. That’s evidenced by the fact that he’s still pining after his high school crush, a beautiful blonde named Tori (Teresa Palmer). When she walks into the music store on a day Matt’s working, he ditches his uniform and pretends to be another customer, making enough small talk to learn that she’s attending a big party later in the day.

Of course, Matt arranges to attend the shindig with his sister (Anna Faris) and goofy best friend, Barry (Dan Fogler). The result is a wild night that forces Matt to come out of his shell and all of the characters to learn something about themselves.

If you grew up in the ’80s, the plot probably sounds familiar because variations of it were used in numerous teen films from that decade. On one hand, the familiarity is welcome, as it gives the movie a nice sense of nostalgia. On the other hand, it makes “Take Me Home Tonight” seem trite. It also begs us to compare the film to 1980s classics, like “Sixteen Candles” and “The Breakfast Club,” and it doesn’t stack up.

Grace, Fogler and Palmer are charismatic and likable, and Faris – who often appears in garbage – is surprisingly strong. Because of this “Take Me Home Tonight,” directed by Michael Dowse, should hold at least passing appeal for anyone who grew up in the era of parachute pants. For those who matured either before or after, there are a lot of other comedies that are more satisfying.

DVD and Blu-ray extras include a video boombox demonstrating how classic ’80s music was used in the film, a short where the cast talks about making the movie and seven deleted scenes.

“Peep World”: Comedy about a group of siblings frustrated by the fact that the youngest has written a novel based on their family. Judy Greer, Michael C. Hall, Taraji P. Henson, Sarah Silverman and Rainn Wilson star.

“Torchwood” – The Complete Original UK Series: BBC is releasing all 31 episodes of the British science-fiction program about a specialized unit that responds to alien threats. The show, which is a spinoff from the “Doctor Who” franchise, is available on both DVD and Blu-ray.

“Doctor Who” – Series Six, Part One: With the complete “Torchwood” hitting stores, BBC must have decided it was a good idea to trot out a new “Doctor Who” release as well. This title includes seven adventures centered on the popular time travelling alien.

Miramax hits on Blu-ray: Lionsgate’s home video wing is giving four outstanding Miramax films their Blu-ray debuts this week: “Bridget Jones’s Diary,” “Chocolat,” “The Boy in the Striped Pajama” and “Amelie.” Each film is recommended, so its nice to see them receive a high-definition release.

“Top Gear” – The Complete First Season: All 10 first-season episodes of the U.S. version of “Top Gear.” As with the original British series, the show focuses on car reviews, humor and extreme automotive stunts.

“Zonad”: Irish film about an escaped thief (Simon Delaney) who convinces a small-town family that he’s a visitor from outer space. Directed by brothers John and Kieran Carney.

“The Smurfs – A Magical Smurf Adventure”: With the new Smurfs movie set to hit theaters at the end of this month, Warner Brothers is rolling out 10 episodes from the 1980s Saturday Morning cartoon series. Included is “Revenge of the Smurfs,” in which the village deals with an invading army.

– Forrest Hartman is an independent film critic whose byline has appeared in some of the nation’s largest publications. E-mail him at forrest@forresthartman.com