Video Verdict: Reviews of ‘Jersey Boys,’ ‘How to Train Your Dragon 2’ and ‘Tammy’ 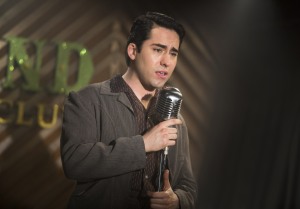 This week’s major home video releases include the sequel to a popular animated film, the latest comedy from Melissa McCarthy and a musical drama by director Clint Eastwood.

3½ stars (out of four)
Rated R for language throughout
Warner Brothers
Available on: Blu-ray, DVD, digital download and on demand

Director Clint Eastwood’s film adaptation of the Tony Award-winning musical “Jersey Boys” is a delightful and beautifully crafted trip down memory lane. Like the Broadway show, Eastwood’s film recounts the history of Frankie Valli and the Four Seasons, often pausing so key players can address the audience and put their personal spin on events.

The story of the Four Seasons is interesting because, despite the band’s clean-cut image, the members grew up on the streets of New Jersey and – to varying degrees – had criminal ties. As depicted in the film, it was guitarist Tommy DeVito and bassist Nick Massi who were particularly rough, each man having spent time in prison. But even Valli, the band’s famed lead singer, admits that rubbing shoulders with crime figures was the norm in the early days. In part, Valli has stated in interviews, that’s because mobsters owned many New Jersey clubs.

The band’s darker-than-normal origin story is perfectly suited for the screen, and Eastwood does a nice job capturing both the desperation and drive that propelled the group to stardom. The movie also includes nice renditions of many of the band’s popular tunes, including “Walk Like a Man,” “Big Girls Don’t Cry” and “Sherry.”

Eastwood has always been an efficient filmmaker, and he covers a lot of territory during the movie’s 134-minute run. He starts when Valli was a 16-year-old no-name working in a Jersey barber shop and follows the group to its induction in the Rock and Roll Hall of Fame.

“Jersey Boys” sports a few name stars – most notably Christopher Walken as mob boss Angelo “Gyp” DeCarlo – but the cast is mostly fresh-faced youngsters. That’s because Eastwood decided to use the Broadway players in his film, and they make the transition nicely. John Lloyd Young is terrific as Valli, a street-smart kid whose angelic voice belies his worldliness. Equally good is Vincent Piazza as DeVito, Michael Lomenda as Massi and Erich Bergen as Bob Gaudio, the Four Seasons’ primary songwriter. Needless to say, their musical chops are outstanding.

With a production budget of approximately $40 million, the “Jersey Boys” theatrical run was disappointing. The film earned just over $47 million. That’s too little for a project that is this well acted, artfully made and just plain fun.

Blu-ray and DVD extras include a behind-the-scenes feature.

How to Train Your Dragon 2

In 2010, directors Dean DeBlois and Chris Sanders introduced animation fans to an intriguing new world populated by dragons and powerful Viking warriors. Thanks to colorful animation, a solid voice cast and excellent storytelling, their film – “How to Train a Dragon” – was a hit.

Four years later, DeBlois is back with a new chapter and, while it isn’t as inventive as the original, there’s plenty to like. Boy hero Hiccup has grown into young adulthood and become one of the finest dragon riders around. In fact, the dragons that the villagers of Berk once-feared are now living peacefully alongside Hiccup and his friends.

As happy as things are at the start of the film, movies need conflict, and Hiccup finds it when he stumbles upon a group of aggressive dragon hunters. The confrontational group tells Hiccup they’re gathering an army for a warrior named Drago Bludvist, and this news strikes fear in the heart of Hiccup’s father, the Viking leader Stoick. Immediately, Stoick orders his villagers to prepare for battle, arguing that Bludvist is a cruel man who kills without cause. Despite his father’s warning, Hiccup sets out on a peace-keeping mission that leads him to a series of startling discoveries.

DeBlois and company take the franchise in new directions rather than rehashing old ground, and that is to be applauded. Too often, filmmakers see sequels as an opportunity to cash in on established norms, but “Dragon 2” maintains the tone of the original without feeling redundant.

The movie is not, however, brilliant. The plotting, although a departure, is straightforward and moderately predictable. Still, it paves the way for some beautiful animated sequences. As with the first movie, things are particularly spectacular when Hiccup and his powerful dragon, Toothless, are airborne.

The original voice cast is back, with Jay Baruchel leading the way as Hiccup. Other voice actors include Gerard Butler (as Stoick), Cate Blanchett, Craig Ferguson, America Ferrera, Jonah Hill and Christopher Mintz-Plasse.

The film, which runs 102 minutes, occasionally stalls, but never for an extended period. It’s also worth noting that DeBlois does a good job setting the stage for a second sequel, which is already in the works.

Blu-ray and DVD extras include an image gallery, a collection of music videos from animated DreamWorks films and a guide to the movie’s dragons.

Melissa McCarthy is a talented performer, but she needs to start picking roles more carefully. Too often directors use her flair for physical comedy and foul-mouthed tirades as a crutch, hoping her outrageousness will make up for lackluster screenplays.

In “Tammy,” McCarthy plays the title character, a downtrodden firebrand who goes on a self-reflective journey after suffering the day from hell. Her troubles begin when she hits a deer on the way to her fast-food job. After arriving late, she is promptly fired, so she heads home for sympathy. Instead, she finds her husband (Nat Faxon) flirtatiously entertaining their next-door neighbor (Toni Collette). Broken financially and emotionally, Tammy decides to take a road trip with her alcoholic grandmother, Pearl (Susan Sarandon).

Defining “Tammy” is difficult because the thin setup is used mainly to stitch offbeat gags together. Many of the jokes rely on the humor resulting from a big, brash woman (McCarthy) performing wild antics, like pushing a personal watercraft to its limits. Occasionally the bits are funny but more often they fall flat. Since there’s not a lot of plot, the movie becomes dull as a whole.

It’s sad to watch McCarthy flounder because she is so dynamic and likable, particularly when directors allow her to mix brash comedy with more intimate moments. “Tammy” is particularly disappointing because it also squanders Sarandon’s considerable talents.

Director Ben Falcone doesn’t ask his leading ladies to do anything more than parade across the screen and act ridiculous. The laughs reside in the fact that these women are doing and saying things no right-minded person would, and that kind of humor only goes so far. It’s more clever to make people laugh by exposing the silliness that permeates our everyday lives, but that takes time and effort, and it doesn’t seem like filmmakers devoted either of those commodities to “Tammy.”

DVD extras are limited to a gag reel. The Blu-ray release includes this, plus deleted scenes, an extended cut of the film and other behind-the-scenes features.

“Let’s Be Cops”: Comedy about two friends (Damon Wayans Jr. and Jake Johnson) who get in over their heads while pretending to be Los Angeles Police officers.

“Sons of Anarchy” – Seasons 1-6 Collector’s Set: FX is currently airing the final season of this drama about the members of a fictional motorcycle gang. For anyone looking to catch up on or revisit previous action, this set contains the first 79 episodes.

“Happy Christmas”: Story of Jenny (Anna Kendrick), a 20-something who moves in with her brother (Joe Swanberg) and his family after a failed relationship. Written and directed by Swanberg. Melanie Lynskey and Lena Dunham also star.

“I am Ali”: Documentary about world-famous boxer Muhammad Ali. The film, directed by Clare Lewins, was pieced together using material from Ali’s own archive and interviews with well-known boxing figures, including George Foreman and Mike Tyson.

“Batman” – The Complete Television Series: All 120 episodes of the 1960s series starring Adam West as the Caped Crusader and Burt Ward as his sidekick Robin. The collection also includes more than three hours of extra features.

“The Shooting”/“Ride the Whirlwind”: Criterion Collection double feature containing two Westerns by director Monte Hellman. Both films star Jack Nicholson. “Ride the Whirlwind” (1966) is about a group of cowboys forced to flee when mistaken for criminals. “The Shooting” centers on two men and a woman tracked by a mysterious gunman.

“True Blood” – The Complete Series: Every episode of HBO’s popular drama about the uneasy relationship between vampires and humans living in a small Louisiana town. For folks who don’t want all 80 episodes, “The Complete Seventh Season” is also available this week.

“Highway to Heaven” – The Complete Series: All five seasons of the 1980s NBC drama about an angel (Michael Landon) who, along with his human friend (Victor French), helps troubled people through times of crisis.

“S.O.B. – Summer of Blood”: Writer-director-actor Onur Turkel presents a horror-comedy about a middle-aged slacker who goes on a hunt for sex and blood after being transformed into a vampire.

One response to “Video Verdict: Reviews of ‘Jersey Boys,’ ‘How to Train Your Dragon 2’ and ‘Tammy’”