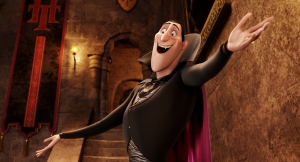 In “Hotel Transylvania,” Dracula isn’t such a bad guy. In fact, he spends much of his time welcoming customers to his upscale guesthouse.

This week’s new home video releases include a supernatural horror film, an animated movie with a supernatural twist and a black comedy that’s just plain super.

3½ stars (out of four)
Rated R for strong violence, bloody images, pervasive language, sexuality/nudity and some drug use
Sony
Available on: DVD, Blu-ray and on demand

In 2008, writer-director Martin McDonagh teamed with actor Colin Farrell for “In Bruges,” one of the best movies of the year. With the rollicking dark comedy “Seven Psycopaths,” they’ve proven that lightning can indeed strike twice.

The film focuses on Marty (Farrell), a Hollywood screenwriter struggling to finish his latest project, a story about seven characters with psychopathic tendencies. Marty’s best friend, Billy (Sam Rockwell), is desperate to help with the creative process, and he provides inspiration with his unorthodox lifestyle.

An unemployed actor, Billy pays his rent by kidnapping dogs, then collecting rewards from their wealthy owners. This venture goes south when he and his partner, Hans (Christopher Walken), steal the beloved Shih Tzu of an unstable gangster (Woody Harrelson). When Marty is mistakenly implicated in the kidnapping, he, Billy and Hans retreat to the desert in hopes of eluding the increasingly hostile bad guy.

McDonagh’s script is so layered, complex and crammed with great characters that it easily ranks among the best of 2012, but it’s not just the screenplay that’s outstanding. With Farrell, Walken and Rockwell leading the way, McDonagh brings his pages to life, delivering a brisk tale that is hilarious despite the many violent acts depicted on screen.

“In Bruges” and “Seven Psycopaths” share many similarities, including the fact that both films find humor in the macabre. The movies are also noteworthy for their ability to insert thought-provoking notions into the sort of bloody, action-packed sequences that are normally found only in guilty pleasures. Because of this, “Seven Psycopaths” provides plenty of pleasure, but none of the guilt.

DVD and Blu-ray extras include six featurettes on the making of the film.

Genndy Tartakovsky has been a player in TV animation for years, and he made a successful jump to the big screen as director of “Hotel Transylvania.” The computer-animated feature not only looks great, it features a sweet story that puts a new spin on some of cinema’s best-known monsters.

In the movie’s world, Dracula, Frankenstein and the Wolf Man are misunderstood creatures that have been terrorized by humans for centuries. In fact, the monsters are more afraid of people than vice versa.

In an effort to keep his daughter, Mavis (voiced Selena Gomez), safe, Dracula (Adam Sandler) builds a carefully guarded luxury hotel that is strictly human-free. His customers range from mummies to gremlins, and everyone has a great time, especially when they gather for one of Mavis’ birthday celebrations. Alas, Mavis is tired of being cooped up in the hotel and constantly begs for an opportunity to explore the outside world that Drac shelters her from.

That makes things particularly troublesome when a good-natured human (Andy Samberg) stumbles upon the hotel. Because he’s actually a nice guy, Drac refuses to kill the young man, but that means he has to hide the human’s identity from both Mavis and his hotel guests.

The story, which was written by committee, is fast-moving and fun, and Tartakovsky does a nice job splitting the screen time between a large group of characters, all voiced by A-list actors. Sandler, Gomez and Samberg are joined by Kevin James, Fran Drescher, Steve Buscemi, Molly Shannon, David Spade, CeeLo Green and Jon Lovitz.

Folks lucky enough to have a Blu-ray 3D system will appreciate Tartakovsky’s respectable use of the technology. Mostly, it adds depth to the visuals, but there are also action sequences where the effects become thrilling. That’s not to say a 2D viewing of the film will disappoint. The storytelling is enjoyable enough to make the film work in either dimension.

DVD and Blu-ray extras include deleted scenes, a music video and a filmmakers’ audio commentary.

2½ stars
Rated R for language and some violence/terror
Paramount
Available on: DVD, Blu-ray, digital download and on demand

When the first “Paranormal Activity” worked its way under people’s skin in 2007, it was a shining example of what a good filmmaker can do with a low budget and suspenseful script. Today, the things that made that first film great seem redundant and overused. Sadly, the “Paranormal Activity” franchise continues to rely on the same tricks it started with five years ago, so the fourth entry isn’t nearly as exciting as the first.

As with the previous movies, the story is presented documentary style, using video footage that was supposedly gathered by the characters themselves. That means the cinematography is shaky, and viewers get plenty of extreme close-ups of the cast.

The plot ties in with the previous movies but introduces a number of new characters, most importantly a teenager named Alex (Kathryn Newton). She notices a series of strange happenings shortly after an odd boy (Brady Allen) moves in next door, and she and her boyfriend (Matt Shively) set up Web cams to document everything.

At first, the footage is only mildly remarkable, but things get stranger – and more frightening – as “Paranormal Activity 4” builds to a climax. Directors Henry Joost and Ariel Schulman, who also made “Paranormal Activity 3,” are successful in creating a creepy atmosphere and they deliver some nice scares during the course of the movie, but they don’t do anything to set it apart from its predecessors.

Both the DVD and Blu-ray releases include the theatrical cut of the movie plus an unrated edition.

“The Cold Light of Day”: Thriller starring Henry Cavill (soon to play Superman in “Man of Steel”) as a businessman whose family is kidnapped during a sailing trip in Spain. Directed by Mabrouk El Mechri.

Best of Warner Bros. collections: Warner Brothers is celebrating its 90th anniversary with three impressive boxed sets representing the best films the studio has ever produced. The largest set is The Best of Warner Bros. 100 Film DVD Collection, a 55-disc monster including all 22 of the studio’s best picture Oscar winners, plus 78 additional favorites. On a smaller scale, Warner is also releasing a 50 Film Blu-ray Collection and a 20 Film Best Pictures Collection. All three sets boast numerous gems, including “Casablanca,” “Ben Hur,” “Gone With the Wind” and “Unforgiven.” The 100- and 50-film sets also include two documentaries on the Warner Brothers legacy.

Downtown Abbey – Season 3: Most recent collection of episodes from PBS’ popular period drama about an aristocratic English family and its servants.

“The Awakening”: Rebecca Hall stars as a 1920s hoax exposer looking into the supposed appearance of a ghost at a boarding school. Dominic West and Imelda Staunton also star. Directed by Nick Murphy.