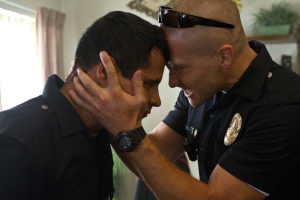 This week’s home video releases are anchored by one of the finest documentaries of 2012 and a terrific police drama.

3½ stars (out of four)
Rated R for strong violence, some disturbing images, pervasive language including sexual references, and some drug use
Universal
Available on: DVD, Blu-ray and on demand

Writer-director David Ayer made his name showing film lovers the ugly, dangerous side of Los Angeles, and his greatest achievement to date is “End of Watch.” The documentary-style film focuses on two police officers working the roughest parts of L.A.

Brian Taylor (Jake Gyllenhaal) is an ambitious former Marine who films many of his on-duty adventures for a night-school project. His partner, Miguel Zavala (Michael Pena), is a devoted father and husband expecting his second child. Although the two officers come from different backgrounds, they love each other like brothers and do whatever it takes to protect each other both on and off duty.

Ayer starts by following Brian and Miguel through a series of shifts, immediately establishing that they are exceedingly good cops despite appearing brash and rugged on the outside. The two find themselves in uncharted territory, however, when a chance arrest leads them toward the extreme criminal activities of a Mexican drug cartel.

Although “End of Watch” is fictional, Ayer patches the narrative together as though it were a documentary, using handheld cameras and footage taken from a variety of perspectives. This makes the film feel more immediate and genuine than movies shot in typical Hollywood fashion, but it also calls attention to the filmmaking process. This is particularly true when Ayer cuts to footage that viewers don’t expect to see, like shots of gang members plotting their criminal activity. Sequences like this force moviegoers to question the sources of such intimate and incriminating footage, and Ayer never divulges them. This is a distraction, but it’s only a minor flaw in an otherwise fantastic project.

At its core, “End of Watch” is a wonderful police drama that illustrates the bond that forms between men who depend on each other for personal safety. The film is also filled with great performances. Gyllenhaal and Pena are fantastic, and they get most of the screen time. When they do receive assistance it’s from a talented group that includes Anna Kendrick, America Ferrera, Frank Grillo and David Harbour.

Oscar voters overlooked “End of Watch,” but it did receive awards-season consideration from other groups. Most notably, the National Board of Review ranked the movie among the top 10 independent films of 2012.

DVD and Blu-ray extras include several behind-the-scenes featurettes, a collection of deleted scenes and an audio commentary by Ayer.

3½ stars
Rated PG-13 for brief strong language and some drug references
Sony
Available on: DVD, Blu-ray and on demand

Most Americans have never heard of singer-songwriter Sixto Rodriguez, but “Searching for Sugar Man” is changing that. The increasingly well-regarded documentary tells the story of South African fans who – believing Rodriguez is deceased – attempt to learn more of his story. What they discover is that he’s very much alive in his hometown of Detroit and completely unaware that his music is a phenomenon outside the U.S.

“Searching for Sugar Man,” which is nominated for a best documentary Oscar, not only details the search for the singer, it includes conversations with people who worked with him as a young artist. These folks universally remember him as a great talent despite the fact that he never achieved success in America. Some music producers even rank him alongside Bob Dylan. Indeed, viewers may be surprised by the depth of his music, which is used as the soundtrack for the film.

The most interesting thing about “Searching for Sugar Man” is its portrait of Rodriguez himself. Even after learning about his huge fan base outside the U.S., the man maintains his modest lifestyle, a fact reinforced by frequent shots of him trudging through Detroit snow. Rodriguez is represented as an artist who is content with his path in live even though it could have been considerably different had he known about his foreign fans.

“Searching for Sugar Man” is also fascinating because of what it says about artistry and American celebrity culture. In a society that seems to care more about marketing and money than talent, there are many fine artists whose voices will never be heard. What’s more, those voices are often obscured by less worthy celebrities.

There’s no indication that director Malik Bendjelloul was attempting to make a broad statement about unsung talent, but he has done so nonetheless. Hopefully, his film encourages people to seek out the unheralded music of Rodriguez and that of other artists who have been similarly disenfranchised.

DVD and Blu-ray extras include two making-of featurettes and an audio commentary by Bendjelloul and Rodriguez.

“The Men Who Built America”: History Channel miniseries about the lasting contributions of Andrew Carnegie, John D. Rockefeller, J.P. Morgan, Henry Ford and Cornelius Vanderbilt. The show, which has a total run time of about six hours, is being presented on three-disc Blu-ray and DVD sets complete with behind-the-scenes features.

“Pina”: Documentary film about German dancer and choreographer Philippina “Pina” Bausch. The movie was made shortly after Bausch’s death in 2009, and it received an Oscar nomination for best documentary feature. Written and directed by Wim Wenders.

“Keep the Lights On”: Story of gay man in a long-term relationship with a drug- and sex-addicted partner. The film was nominated for four Independent Spirit Awards, including best feature. Thure Lindhardt and Zachary Booth star. Co-written and directed by Ira Sachs.

“The Paperboy”: Story of a reporter (Matthew McConaughey) and his brother (Zac Efron) who investigate the case of a prisoner on death row. Nicole Kidman and John Cusack also star. Co-written and directed by Lee Daniels (“Precious”).

“Scarecrow and Mrs. King” – The Fourth and Final Season: Last 22 episodes of the 1980s TV drama about two secret agents (Bruce Boxleitner and Kate Jackson) who are romantically involved.

“Deadly Blessing”: Director Wes Craven’s 1981 horror film is making its way to DVD and Blu-ray for the first time. The movie focuses on a widow (Maren Jensen) who fears that she and her friends have become targets of an evil cult. Sharon Stone, Susan Buckner and Ernest Borgnine also star.

“The Perks of Being a Wallflower”: This excellent coming-of-age drama won’t be available on Blu-ray and DVD until Feb. 12, but fans can purchase it via digital download starting this week. Logan Lerman, Ezra Miller and Emma Watson star.