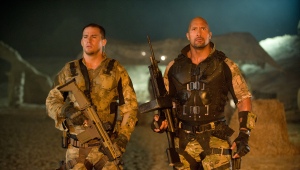 It’s a slow week for home video, as the only major theatrical release moving to the small screen is an action film based on the G.I. Joe toy franchise.