Video Verdict: Review of ‘Night at the Museum – Secret of the Tomb’ 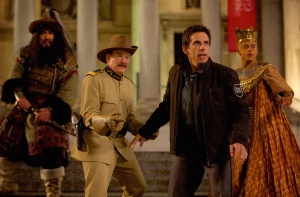 From left, Patrick Gallagher, Robin Williams, Ben Stiller and Rami Malek star in “Night at the Museum: Secret of the Tomb.”Photo courtesy of 20th Century Fox

The latest entry in the “Night at the Museum” franchise is the only major theatrical release making its way to home video this week.

Night at the Museum: Secret of the Tomb

2½ stars (out of four)
Rated PG for mild action, some rude humor and brief language
20th Century Fox
Available on: Blu-ray and DVD

“Night at the Museum: Secret of the Tomb,” like so many unnecessary sequels, isn’t so much bad as irrelevant.

The film’s selling point is that it blends top-notch special effects and a family friendly story with an excellent cast that includes Ben Stiller, Owen Wilson, Steve Coogan, Ricky Gervais and the late Robin Williams. The down side is that it fails to bring anything new to the table.

Set after events depicted in “Night at the Museum: Battle of the Smithsonian,” the movie focuses on a new crisis at the American Museum of Natural History. The magical tablet responsible for bringing museum exhibits to life has begun to mysteriously degrade, leaving museum guard Larry Daley (Ben Stiller) desperate to fix it before his exhibition friends lose the spark of life. Larry learns that his best shot is to travel to London where the parents of his Egyptian pal, Ahkmenrah (Rami Malek), are on display. The hope is that they can fix the tablet after Larry brings them to life with its remaining magic.

Ultimately, this is little more than an excuse to transport favorite “Night at the Museum” characters to a new setting. This, of course, is the exact formula used to create the second film, meaning the screenwriting team couldn’t even be bothered to stray from the outline that creators Thomas Lennon and Robert Ben Garant sketched last time.

As in the earlier movies, there’s a lot of star power on screen, and the cast is terrific. It’s particularly nice, albeit a bit sad, to watch Williams recreate his charming reading of Teddy Roosevelt. The trouble is, viewers have seen this all before … twice.

The only twist is the addition of new characters. Last time, viewers got Amy Adams as Amelia Earhart and Bill Hader as General George Custer. They’re both gone, but they’ve been replaced by Dan Stevens as the Arthurian knight Sir Lancelot and a prehistoric man who looks so much like Larry that Stiller is allowed to play a double role. The only other significant addition is a weak subplot about Larry’s son, Nick (Skyler Gisondo), who wants to become a club DJ instead of attending college.

Director Shawn Levy has built his career around this franchise, and his effort is workmanlike. The production value is high, the cinematography is solid and the special effects are first rate. In fact, kids will probably never tire of watching a giant T-Rex skeleton bounce about like a puppy. What Levy doesn’t do – and it’s hard to pin this entirely on him – is improve on the lackluster storytelling.

The saddest thing about these movies is that there was surely a way to do better. Considering the immense talent of the cast and the remarkable breadth of storytelling opportunities (we are talking about history coming to life), one wonders why all the creativity dried up after the first outing.

Blu-ray and DVD extras include a behind-the-scenes featurette, photo galleries and deleted and extended scenes.

“The Soft Skin”: Criterion Collection restoration of director François Truffaut’s 1964 drama about a respected academic (Jean Desailly) who begins an ill-advised affair with a stewardess (Françoise Dorléac). Presented in French with English subtitles.

“The Liberator”: Édgar Ramírez plays South American revolutionary Simón Bolívar in this historical drama about the man’s life and political accomplishments. Directed by Alberto Arvelo. Presented in English and Spanish with English subtitles.

“Sound of Music” – 50th Anniversary Edition: Twentieth Century Fox celebrates five decades of “The Sound of Music” with a five-disc set containing Blu-ray, DVD and digital versions of the feature. The release also contains more than 13 hours of bonus content, including a documentary about star Julie Andrews returning to Salzburg, where the movie was filmed.

“The Breakfast Club” – 30th Anniversary Edition: “The Breakfast Club” may not be the classic that “Sound of Music” is, but it did speak to a generation. The movie – starring Molly Ringwald, Emilio Estevez, Judd Nelson, Anthony Michael Hall and Ally Sheedy – is the signature work of writer-director John Hughes. Universal’s 30th anniversary release features a digitally remastered and restored version of the feature.

“Late Phases – Night of the Wolf”: Horror film about a blind veteran (Nick Damici) who faces off against the monstrous creature that kills his seeing-eye dog. Directed by Adrian Garcia Bogliano.