Video Verdict: Reviews of “Pride” and “The Good Lie” 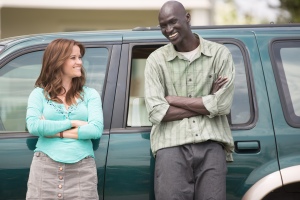 Reese Witherspoon, left, and Ger Duany star in “The Good Lie,” a drama inspired by the real-life story of the Lost Boys of Sudan.

This year, Christmas week is slow in terms of home video. Still, two small titles are worthy of mention, and both were inspired by real-life events.

3 stars (out of four)
Rated R for language and brief sexual content
Sony
Available on: Blu-ray, DVD and digital download

In the summer of 1984, striking Welsh mineworkers found unlikely allies in the form of lesbian and gay activists from London. The activists, led by Mark Ashton (Ben Schnetzer) and Mike Jackson (Joseph Gilgun), formed an organization called Lesbians and Gays Support the Miners, and they continuously funneled money to the out-of-work laborers.

“Pride,” written by Stephen Beresford and directed by Matthew Warchus, was inspired by these real-life events, and it focuses on the unlikely bond that developed between the groups. Warchus does much to show the difference between the two parties. Ashton and his followers are depicted as colorful, brash and relentlessly energetic. These qualities – along with their experience in gay rights activism – make them excellent fund raisers. The miners, on the other hand, are shown as low-key, working-class folk getting by the best that they can.

In the movie, the groups bond when miner Dai Donovan (Paddy Considine) takes the stage at a gay bar to thank everyone who donated to their cause. When he first steps to the microphone, he faces jeers and derision, but his inspiring and heartfelt thanks win the crowd over. This is obviously a fictionalized “movie moment,” but it works, demonstrating the fact that prejudices are only eliminated with effort.

Much of “Pride” is centered on tensions that arise between miners who don’t want their cause associated with homosexuality and members of the gay community who see the miners as the thugs who bullied them as children. Nevertheless, the more accepting members of each sect form a bond, making “Pride” an inspiring film about the evils of bigotry and the power of tolerance.

“Pride” has won a number of honors, including best picture at the British Independent Film Awards and the Queer Palm at the Cannes Film Festival. It is also competing for best comedy or musical in the Golden Globes race.

Despite the Globes attention, it is unfair to strictly categorize “Pride” as a comedy. The movie contains funny moments, and Warchus relies on a light, frothy tone. Still, there are plenty of dramatic scenes, and they are underscored by fine performances.

Schnetzer and Considine are terrific as group leaders, and they get support from a fine cast that includes Dominic West, Imelda Staunton, Bill Nighy, George MacKay and Andrew Scott. The result is an unexpected and inspiring dramedy that feels bigger than its budget.

Blu-ray and DVD extras include a featurette on the story that inspired the movie and six deleted and extended scenes.

The movie starts in Sudan where a number of youth are displaced after their parents are murdered during the second Sudanese civil war. Alone and desperate to survive, they begin a long and dangerous march to Kenya. Falardeau does a fine job depicting the horrors these children see along the way, but the film isn’t about their time in Sudan so much as their eventual adjustment to life in America and their determination to stay true to themselves and each other.

Most of the movie focuses on events that occur after three of the Lost Boys arrive in the United States with their sister. Because U.S. sponsors are unable to find a home for all four children, they are separated. Mamere (Arnold Oceng), Jeremiah (Ger Duany) and Paul (Emmanuel Jal) are forced to live in Kansas City, Mo., while their sister, Abital (Kuoth Wiel), is sent to Boston. The Boys, who have by this time grown into young men, struggle with the separation from their sister, the cultural differences of America and memories of their violent past. They also receive help from a number of Americans, most notably Carrie Davis, a brash employee at a Kansas City employment firm. After helping the young men secure work, she becomes increasingly involved in their lives, eventually attempting to reunite them with their sister and a brother who is still living in Africa.

Although “The Good Lie” has its roots in a violent and terrifying civil war, Falardeau’s film is surprisingly uplifting. The movie demonstrates that human beings can rebound from terrible events without becoming hopelessly jaded. It also shows that human kindness is often the best cure for personal tragedy.

Witherspoon is a fine actress, and she adds both talent and star power to the film. Other recognizable faces include Corey Stoll and Sarah Baker, who are good in key supporting roles.

The revelation for many viewers will be the performances of the young actors playing the Lost Boys. Oceng is an Ungandan-born actor who made his name in the UK, but Duany and Jal are real-life Lost Boys and Wiel also has ties to Sudan. Such authenticity is always nice, but it can result in strained performances. That’s not the case here, as all of the actors blend nicely, turning in believable and emotionally powerful readings of their characters.

Thematically and structurally, “The Good Lie” is workmanlike, but it stands out in the area that matters most: storytelling.

Blu-ray extras include deleted scenes and a making-of feature.

“The Trip to Italy”: Steve Coogan and Rob Brydon play fictionalized versions of themselves in this Michael Winterbottom feature. The plotting has the two men conversing about a variety of topics while touring Italian restaurants as part of a newspaper assignment.

“Dominion” – Season One: First eight episodes of the apocalyptic Syfy series about humans who – along with the archangel Michael – are battling a heavenly army. Christopher Egan, Tom Wisdom, Roxanne McKee and Luke Allen-Gale star.

“Continuum” – Season Three: This science-fiction drama is supposed to end in 2015 with a climactic fourth season. In the meantime, everyone can get up to speed with the 13 episodes on this release. Plotting centers on a future police officer who inadvertently traveled back in time with a group of political dissidents. While they work to disrupt the government, she attempts to stop them.

“My Favorite Martian” – Season Two: Thirty-eight episodes of the 1960s TV sitcom about a human-looking Martian who finds himself stranded on Earth after his spaceship crashes. Ray Walston, Bill Bixby and Pamela Britton star.

“Wings – Skyforce Heroes”: Animated film about a firefighting plane that gets a chance to redeem himself after his reckless actions lead to tragedy. The voice cast includes Josh Duhamel, Hilary Duff, Rob Schneider, Jesse McCartney and Tom Skerritt.

2 responses to “Video Verdict: Reviews of “Pride” and “The Good Lie””