Video Verdict: ‘Her,’ ‘That Awkward Moment,’ ‘I, Frankenstein’ 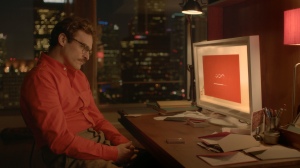 Joaquin Phoenix falls in love with his computer operating system in “Her.”

Movie lovers can count on writer-director Spike Jonze to tackle fascinating projects that live outside the mainstream, but his films often meander. These competing tendencies make him one of the most exciting – and frustrating – filmmakers working, and he displays both his gifts and limitations in “Her.”

The movie is, in many ways, a work of creative genius, delivering insights on topics ranging from romantic relationships to the failures of modern technology. It is also a cyclic piece that beats its premise into viewer’s heads, tediously repeating simplistic concepts long after they’ve been established.

The plot centers on Theodore (Joaquin Phoenix), a lonely writer living in a near-future version of Los Angeles. Technology has continued to advance, making computers an even deeper part of our existence, but the world of “Her” is not considerably different than our own. Theodore makes his living composing letters for people who are too lazy – or too afraid – to write them on their own, and his career path tells us much about the film’s destination.

Theodore’s letters are sweet, sentimental and beautifully crafted, a fact that his co-worker Paul (Chris Pratt) often reminds him of. Alas, Theodore walks through life wistfully, irreparably damaged by the collapse of his marriage. He attempts to break from the sadness with phone sex and the occasional blind date, but he is left unfulfilled.

It is technology that eventually turns Theodore’s life around. Software developers launch a new computer operating system that promises artificial intelligence, and Theodore is one of the first consumers. He is unsure what to expect and, thus, astounded when the system lives up to its advertising. Within minutes, Theodore is talking to an operating system named Samantha, and she possesses the same curiosities and emotions as a human being. She even expresses longing for a physical form. Samantha also has advantages over humans. She can read lengthy books instantaneously and make complex computations without effort. These things amaze Theodore, and it’s not long before he and Samantha fall in love.

Samantha is never seen, but Scarlett Johansson provides her voice in an astounding performance. In fact, Johansson’s voice work is so good that an Oscar nomination would have been reasonable. Samantha’s hopes, fears and emotions are always clear, even when her words leave room for interpretation.

Phoenix, who has the advantage of acting with his entire body, is also fantastic, and the two actors build a surprisingly tender and convincing relationship. That seems to be the point of Jonze’s film. Society has reached a place where technology is so intertwined with human life that many of us have surprisingly intimate relationships with machines. And those machines regularly distract us from human interaction.

“Her” is not as judgmental as one might expect, but it has a distinct point of view, and Jonze makes that clear. In fact, as noted earlier, his approach to the material is somewhat longwinded and heavy handed. Had he trimmed 20 minutes from the film, it would have been brilliant. Instead, it’s merely great.

Blu-ray and DVD extras include a behind-the-scenes feature.

2½ stars
Rated R for sexual content and language throughout
Sony
Available on: Blu-ray, DVD, digital download and on demand

With “That Awkward Moment,” Zac Efron continues his transition from teen heartthrob to full-fledged leading man, and the results are mixed. Efron himself is a winner, and there is little to dislike in his portrayal of Jason, a twenty-something New Yorker who is a hit with the ladies. Unfortunately, “That Awkward Moment” is a tired relationship comedy that walks an already well-worn path.

The plot involves Jason and his two best pals, Daniel (Miles Teller) and Mikey (Michael B. Jordan). Mikey, a doctor, is the most sensitive of the three, and he is devastated when he learns that his wife (Jessica Lucas) is having an affair. In hopes of cheering Mikey up, Jason and Daniel introduce him to their womanizing ways, and all three men vow to remain single.

Soon, the strength of their pledge is put to the test. For Jason, the trouble starts with a sharp-witted writer named Elie (Imogen Poots). Although Jason first sees Elie as another quick hookup, he soon realizes she has more sparkle than his average girl. In the meantime, Daniel discovers that his longtime friend Chelsea (Mackenzie Davis) is a lot more than a friend. As the men explore their new relationships, they struggle to maintain their freewheeling ways, and it becomes clear that they can’t have the best of both worlds.

Like Efron, Teller and Jordan are terrific, and the three male leads have a nice chemistry. The women in the cast are also good, and writer-director Tom Gormican does a reasonable job with pacing.

The idea of turning Frankenstein’s monster into an action hero seems ridiculous, but there’s something joyful about writer-director Stuart Beattie’s “I, Frankenstein.” Based on the graphic novel by Kevin Grevioux, the movie paints the title character as less monstrous than normal, and it doesn’t hurt that Aaron Eckhart, a square-jawed leading man, holds the title role.

This take on the Frankenstein myth is set directly after the events in Mary Shelley’s “Frankenstein.” The story begins as the monster is attacked by demons, and he survives only through the efforts of two powerful, winged warriors with the ability to transform into stone gargoyles. The monster – with viewers – learns that demons and gargoyles have been enemies for centuries, the latter protecting mankind from evil. The gargoyle queen (Miranda Otto) decides to name the monster Adam, and she encourages him to use his superhuman strength to join her struggle. Alas, he refuses.

The next time we see Adam, centuries have passed. Because his reanimated body is ageless, he has fine-tuned his demon killing abilities, but he dispatches them only for his protection. When he again encounters the gargoyles, Adam learns that the demons have a special interest in him, and this places him at the heart of the struggle between good and evil.

“I, Frankenstein” is one part horror flick and two parts action movie, with much of the screen time devoted to impressive, well-choreographed battle sequences. Beattie does a wonderful job with the visuals, and the movie looks particularly good in 3D, this despite the fact that it was originally shot in 2D. Granted, only a handful of people are set up for 3D at home, but those who have the gear should put it to work.

There is nothing unusual in the plotting, and movies about the supernatural are ever-present. That may be why “I, Frankenstein” received generally bad notices when released into theaters. For what it’s worth, much of the grousing seems undeserved.

“I, Frankenstein” is exactly what its name implies: a big, broad, over-the-top action film that is unapologetic in its attempts to entertain. Because of that, it largely succeeds.

“Overlord”: Director Scott Cooper’s 1975 drama about World War II receives a deluxe release from the Criterion Collection. The movie centers on a 21-year-old man and his journey from basic training to the front lines of D-Day. The movie features a restored, high-definition film transfer that was supervised by Cooper.

“Deadly Code”: Drama starring John Malkovich as the banished leader of a Siberian criminal organization. While living in exile, he teaches his grandson about the “criminal code.” Directed by Gabriele Salvatores.

“Wolverine Weapon X – Tomorrow Dies Today”: Motion comic centered on Marvel’s popular Wolverine character. In this adventure, Wolverine must steel himself for battle as robots from the future wage war against superheroes.