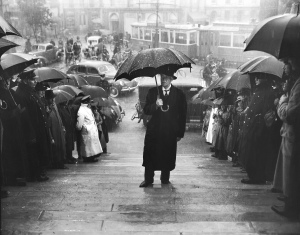 It’s a particularly slow week for home video, as no major theatrical releases are making their way to the small screen. That makes it the perfect time for film lovers to revisit a classic, and the Criterion Collection is delivering a restored version of one of Alfred Hitchcock’s first American movies.

3 stars (out of four)
Unrated
The Criterion Collection
Available on: DVD/Blu-ray combo and digital download

Despite the Oscar loss, the movie is well worth revisiting, and the Criterion Collection is making this an appealing time to do so. Criterion is delivering a new 2K digital restoration of the movie on a dual-format Blu-ray/DVD release. The picture and sound quality is beautiful, particularly for a move that is now 74 years old, and the film features a number of memorable performances.

Joel McCrea leads the way as John Jones, a New York newspaper reporter sent to Europe in 1939 to cover the looming possibility of a world war. For his first assignment, he is asked to cover an event hosted by the Universal Peace Party, an organization devoted to preventing the international conflict. The guest of honor at the event is supposed to be a Dutch diplomat named Van Meer (Albert Bassermann), but he cancels his appearance at the last moment. Days later, the diplomat appears to be assassinated, and Jones chases the killer. This leads him into an international conspiracy that could become the greatest story of his career … if he lives to write it.

“Foreign Correspondent” was released in 1940 and, as with many early thrillers, it shows its age. Although the story features several compelling twists, it is simplistic, and Hitchcock uses shorthand that was common during the era. For instance, Jones falls for a woman named Carol Fisher (Laraine Day), and their romance progresses from simple flirtation to proclamations of love in a matter of moments. Other characterizations and relationships are similarly condensed, making the movie play more like a comic book than a novel. Although this simplification removes nuance, it is also charming.

Watching a movie like “Foreign Correspondent” is akin to watching a Golden Age Broadway musical. Despite the lack of sophistication in storytelling, the material possesses an energy and luster missing in many of today’s entertainments. The writing is also top-notch. One of the great joys of good, 1940s cinema is the dialogue. In “Foreign Correspondent,” the banter between McCrea and Day is a joy, even when it feels artificial. David Mamet and Quentin Tarantino do a nice job embracing the spirit of rapid-fire, 1940s dialogue, but only a handful of other modern screenwriters display this gift.

Criterion’s release of the movie includes DVD and Blu-ray copies of the film and an entire disc of extras. Included is a “Dick Cavett Show” interview with Hitchcock, a 1946 radio adaptation of the film, a piece on the movie’s special effects, and a 1942 “photo-drama” by Hitchcock.

“Game of Thrones” – The Complete Third Season: The fourth season of this HBO fantasy drama is slated to debut in April. In the meantime, fans can enjoy all 10 episodes from season three. The series is based on George R.R. Martin’s “A Song of Ice and Fire” novels. The popular show has numerous plot lines, the most notable focused on a continuing power struggle between noble families.

“Fantastic Mr. Fox”: Along with “Foreign Correspondent,” the Criterion Collection is rolling out a beautiful new DVD/Blu-ray release of director Wes Anderson’s 2009 animated film “The Fantastic Mr. Fox.” Based on the children’s book by Roald Dahl, the movie tells the story of a wily fox who battles three angry farmers. The film’s stop-motion animation is beautiful, and Anderson’s quirky style is apparent in every scene.

“Hellbenders”: Horror comedy about unusual ministers who live in sin so they can personally deliver demons to Hell. Clifton Collins Jr., Clancy Brown and Andre Royo star. Written and directed by J.T. Petty.