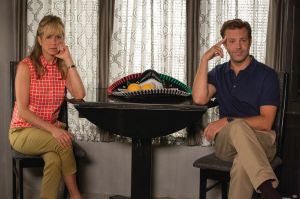 Jennifer Aniston, left, and Jason Sudeikis star in the comedy “We’re the Millers.”

This week’s home video releases cover a lot of territory, and they range from an animated Disney film to an R-rated comedy.

Director Rawson Marshall Thurber’s “Were the Millers” isn’t subtle or deep, but it is funny.

The movie centers on David Clark (Jason Sudeikis), a small-time pot dealer who finds himself in big-time trouble after a group of hoodlums rob him. With both his stash of drugs and his cash gone, David is unable to repay the thousands of dollars that he owes his supplier, Brad Gurdlinger (Ed Helms). Although Brad is so rich that he has an orca in his private aquarium, he refuses to cut David slack and gives him one option to repay his debt: move a huge stash of marijuana from Mexico to the U.S.

David is poorly equipped for such a big and dangerous job, but he decides that he can pull it off as long as he finds a way to blend in at the border. The best way to do this, he decides, is to look like a clean-cut family man. So, he convinces several acquaintances to play the part of his family in exchange for a percentage of the cash that he will receive once the deal is complete.

David’s makeshift crew includes Rose O’Reilly (Jennifer Aniston), a stripper who lives in his apartment building; Kenny Rossmore (Will Poulter), an abandoned teen; and Casey Mathis (Emma Roberts), a homeless girl. After fresh haircuts and a pep talk, the ragtag group sets off on its journey.

Sudeikis is terrific in the lead role because he makes David charming enough to root for, yet smarmy enough to be believable. Aniston, who often disappoints on screen, is also terrific. She makes viewers believe that she’s a good woman forced into a rough profession, and that makes her likable. Poulter and Roberts are also solid, and they get apt support from the likes of Nick Offerman and Kathryn Hahn.

“We’re the Millers” is inherently silly, but that’s OK. Thurber and his team of screenwriters weren’t shooting for profundity. Their obvious goal was to produce a broad, R-rated comedy peppered with frequent laughs and a creative premise, and they succeed at nearly every turn.

DVD and Blu-ray extras include outtakes, deleted scenes, behind-the-scenes features and an extended cut of the movie.

With “The World’s End,” writer-director Edgar Wright and writer-actor Simon Pegg round out a comedy series that has been affectionately labeled the Three Flavours Cornetto Trilogy. The trio of films began with “Shaun of the Dead” and also includes “Hot Fuzz.” Although each feature stands independently, they are linked by references to Cornetto ice cream and largely similar casts.

In “World’s End,” Pegg stars as Gary King, a substance-abusing, middle-aged man whose adult life has not lived up to his teenage dreams. One of Gary’s greatest regrets is that he and his pals failed to complete the Golden Mile pub crawl in their hometown of Newton Haven.

Although Gary’s old friends, who are now largely estranged, have settled into typical adult lives, he convinces them that they should relive their glory days and attempt to complete the crawl. Reluctantly, each member of the old crew – Peter Page (Eddie Marsan), Oliver Chamberlain (Martin Freeman), Steven Prince (Paddy Considine) and Andy Knightley (Nick Frost) – agrees.

As they begin the crawl, it’s obvious that things have changed in their old digs. Most notably the pubs have fallen victim to what the characters call “Starbucking.” In other words, corporations have homogenized them. It also becomes clear that it’s not realistic for middle-aged men to recapture a long-passed era. Just as they are about to call the whole thing off, Gary gets in a fight with a local youth and – when the boy’s head comes off – he is determined to be a robot. Startled, the men realize that their hometown is the hub for an alien invasion.

“The World’s End” is an unpredictable comedy, and that is refreshing, particularly since the movie industry has become as homogenized as the pubs the movie characters frequent. The film also serves as a fascinating form of social commentary. Pegg and Wright ask viewers to think about the ways we identify ourselves and to contemplate the role our past plays in defining our future. One needn’t debate such high-minded topics to enjoy the goofy comedy that defines much of “World’s End,” but the fact that such depth exists makes it exceptional.

“The World’s End” is available as both a single-film release and as part of a combo pack that includes “Shaun of the Dead” and “Hot Fuzz.”

Some actors are so charismatic and talented that they make any film better. In “2 Guns,” director Baltasar Kormakur (“Contraband”) has two of these performers, and the result is a nifty thriller that powers its way through a twist-filled plot.

Denzel Washington and Mark Wahlberg star respectively as Robert “Bobby” Trench and Michael “Stig” Stigman, a pair of undercover operatives who become partners in crime while attempting to infiltrate a drug cartel. The first twist is that neither man realizes the other is a good guy… until their respective missions fail.

Bobby is a DEA agent who believes Stig will help him dissolve the cartel. Stig is a Naval intelligence officer who was ordered to “befriend” Bobby as part of his mission. When the two men – each assuming the other is a criminal – rob a bank while undercover, they trigger a series of events that leaves each man at odds with his own organization and in extreme danger. They soon realize they have been pawns in a complicated game, and they work together to set things right.

Washington and Wahlberg are always good, and they have an easygoing chemistry that makes them even better when working together. The supporting cast is also strong, sporting a number of terrific players, including James Marsden, Bill Paxton, Paula Patton and Edward James Olmos. Kormakur makes the most of their talents and keeps the plot moving at a breakneck pace. There’s so much going on that it’s easy to lose key plot points, but attentive viewers will be rewarded with a thriller that is both fun and surprising.

As with most Hollywood action movies, “2 Guns” isn’t remotely believable. That would be a problem if Kormakur, Washington and Wahlberg were attempting a straight drama, but they aren’t. The film plays like an over-the-top comic book fable, which is appropriate since it was inspired by the like-titled series of graphic novels. The exaggerated material works well in a cinematic setting, and that makes it an ideal choice for a Friday-night popcorn flick.

DVD and Blu-ray extras include deleted scenes and a commentary featuring Kormakur and producer Adam Siegel.

2 stars
Rated PG for some mild action and rude humor
Disney
Available on: DVD, Blu-ray, digital download and on demand

Although originally conceived as a direct-to-video title, Disney brass decided “Planes” could benefit from a theatrical release. That decision was rewarded with a U.S. box office gross that approached $90 million. Although it’s difficult to shrug off that kind of money, it pales in comparison to the $244 million earned by “Cars,” the animated film that inspired “Planes.” The reason for the disparity in income is obvious. Although “Planes” made the jump to the big leagues, its script is still second tier.

The screenplay – written by Jeffrey M. Howard, with story input from the movie’s director, Kay Hall, and “Cars” writer-director John Lasseter – centers on Dusty Crophopper, a small-town crop dusting plane who dreams of becoming a champion racer. Although he is repeatedly warned that he isn’t built for speed, Dusty practices every day, until he is rewarded with the opportunity to compete in a well-known race around the world.

The bulk of the movie is spent following Dusty’s adventures as he competes against the best of the best, including a ruthless racing plane named Ripslinger. The latter has won the race three previous times, and he plays dirty.

“Cars” was a lot of fun because Lasseter and co-director Joe Ranft took plenty of time to develop their characters. “Planes,” on the other hand, provides something closer to character sketches. Dusty is a starry-eyed youngster, and he pursues his dream with the help of a fuel truck named Chug, a forklift/mechanic named Dottie and a 1940s warplane named Skipper. Although viewers understand the roles that these personified machines play in the story, they don’t really get to know them.

That’s a lot of talent. But pretty visuals and compelling voices aren’t enough. Everything begins and ends with the story, and “Planes” doesn’t have the right stuff.

DVD and Blu-ray extras include deleted scenes and a short feature centered on the racing planes in the film.

“The To Do List”: Comedy about a teenage virgin (Aubrey Plaza) who wants to become sexually experienced before heading to college. In order to meet her goal, she makes a list of sexual activities and asks her sister (Rachel Bilson) and boss (Bill Hader) to mentor her. Written and directed by Maggie Carey.

“Star Trek – The Next Generation” – Season Five: It has been 15 years since “Star Trek: The Next Generation” aired on TV, but the series still has plenty of fans. For them, Paramount is releasing all 26 episodes of the fifth season on high definition Blu-ray. Along with the overall increase in video quality, Paramount has enhanced the visual effects and digitally remastered the soundtrack. One of the highlights of the fifth season is the two-episode “Unification” story arc featuring Leonard Nimoy as Spock. Fans who want to purchase only those episodes can buy “Unification” separately for a considerably reduced price.

“Tokyo Story”: Criterion Collection release of director Yasujiro Ozu’s 1953 drama about an aging Japanese couple who travel to Tokyo to visit their grown children. The film is widely considered to be one of the finest features ever produced.

“Bridegroom”: Documentary film about the struggles that Shane Bitney Crone faced after his lover, Thomas Bridegroom, died. Bridegroom’s family prevented Crone from attending the funeral, prompting Crone to produce a viral video about the lack of rights that gay couples receive.

“Treme” – The Complete Third Season: This drama, about residents of a New Orleans neighborhood and their struggle to recover from Hurricane Katrina, will wrap with a shortened fourth season debuting Dec. 1. That gives fans a handful of days to digest the 10 most-recent episodes contained on this set.