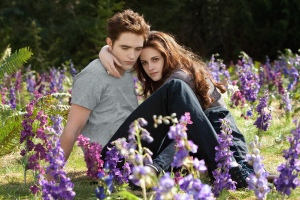 This week’s home video releases are anchored by the final installment of the popular “Twilight” franchise.

2½ stars (out of four)
Rated PG-13 for sequences of violence including disturbing images, some sensuality and partial nudity
Summit Entertainment
Available on: DVD, Blu-ray, digital download and on demand

The first movie in “The Twilight Saga” was a dull supernatural romance that showed promise yet never achieved emotional depth. Sadly, the fifth and final film in the series shares all the same traits.

Ostensibly, the “Twilight” movies are about werewolves and vampires, but the supernatural stuff has never been more than the backdrop for a classic love triangle. Bella Swan (Kristen Stewart) is an average young woman who attracts the attention of a fledgling werewolf named Jacob (Taylor Lautner) and an aged vampire named Edward (Robert Pattinson). Through the series, the guys fight, and Bella finds her life endangered by the creepy crawlies who surround them.

By the time viewers get to “Breaking Dawn Part 1,” Bella has chosen a life with Edward, and the two marry and conceive a child. Alas, Bella’s human body is not strong enough to carry a vampire baby, and this forces Edward to change her into a bloodsucker.

In “Breaking Dawn Part 2,” Bella is just adapting to vampire life when she and Edward learn that the powerful vampire leaders known as the Volturi are about to attack them. Turns out these nasty guys believe Bella’s and Edward’s child is a forbidden creature, so Edward and his extended family prepare for battle. Jacob, although still emotionally wounded, agrees to help in the fight.

As with the previous “Twilight” films, the plotting is lightweight, the execution is melodramatic and the special effects are subpar. All these flaws are out of character for director Bill Condon (“Dreamgirls,” “Gods and Monsters”), but even great filmmakers can stumble when saddled with weak material.

It doesn’t help that Stewart’s reading of Bella hasn’t improved over the years. The supposedly beguiling heroine never comes across as more than a sulky teen who has difficulties expressing emotion. As if in response to this, Edward repeatedly tells anyone who will listen that she is amazing. Perhaps his lines are designed to convince viewers because there is little in Stewart’s performance that qualifies as anything other than flat.

DVD and Blu-ray extras include an audio commentary by Condon and a seven-part, making-of documentary.

2½ stars
Rated PG-13 for sequences of intense war violence and action, and for language
20th Century Fox
Available on: DVD, Blu-ray, digital download and on demand

This remake of director John Milius’ 1984 film about a military invasion of America is reasonably enjoyable, as long as one doesn’t demand realism or political nuance. Because more than two decades have passed since the original movie hit theaters, director Dan Bradley and the screenwriting team of Carl Ellsworth and Jeremy Passmore had to make notable changes to the material, not the least of which is a new primary antagonist. In 1984, it was the Russians who invaded America, but in Bradley’s 21st century version, North Korean soldiers parachute into Spokane, Washington, creating chaos.

Before the Koreans gain firm control of the area, off-duty U.S. Marine Jed Eckert (Chris Hemsworth) and his teen brother, Matt (Josh Peck), flee to the mountains with several friends. Devastated by the fact that many of their relatives have been either killed or taken prisoner by the enemy, the small group of youngsters wage war against the Koreans using guerilla tactics. They also attempt to keep the imprisoned citizens of Spokane hopeful by taking the name Wolverines and calling attention to their exploits.

Since Jed is the only member of the group with military training, he becomes the leader, and he works hard to turn his teenage army into a lethal killing machine. As the Wolverines become increasingly effective in their attacks, the enemy devotes more attention to them, leading to escalating bloodshed. Unsurprisingly, “Red Dawn” does a lot of flag waving, and it is relatively successful at conveying the message that America’s strength lies not in its government but its individual citizens.

The movie is less successful in terms of believability. While it’s true that guerilla warfare can cause problems for any military organization, it’s difficult to believe the untrained Wolverines would be able to effectively outgun better-armed professional soldiers, as they do in the movie. This new “Red Dawn” is also more optimistic than its 1984 progenitor, and that’s disappointing. Both movies note that warfare has a cost, but that message isn’t nearly as pronounced this time.

In many respects, “Red Dawn” is the type of old-school war movie that glamorizes combat while ignoring the complexities of political conflict. Because of that, it works as mindless entertainment, but fails on a broader level.

DVD and Blu-ray extras include a collection of making-of featurettes.

1½ stars
Rated PG-13 for some sexual situations, language and a brief intense image
Sony
Available on: DVD, Blu-ray and on demand

These days, too many filmmakers believe the only requirement for a romantic comedy is a handsome leading man and equally attractive leading lady. Meanwhile, things like plot, character development and screen chemistry are largely ignored. This leads to an overabundance of films that are neither romantic nor funny, and the latest is “Playing for Keeps,” a bland affair that wastes its impressive cast.

Viewers are supposed swoon over Gerard Butler and Jessica Biel, and they are fine and charismatic actors when at their best. Unfortunately, writer Robbie Fox and director Gabriele Muccino don’t give them anything to work with.

Butler plays George, a former soccer star who is scrambling to pay the bills because he’s blown all his money. Biel is Stacie, George’s former lover and the mother of his young son, Lewis (Noah Lomax). They live in the same Virginia suburb and have a reasonably good relationship as far as exes go. Stacie encourages George to spend more time with their son, and this eventually leads him to coach a youth soccer team. This decision not only delights Stacie, it grabs the attention of every other mom within eyeshot of George’s perfectly chiseled abs.

The romance, such as it is, comes when viewers learn that George hasn’t gotten over Stacie. Unfortunately, it isn’t easy for him to win her heart because the poor guy has several other soccer moms – including hotties portrayed by Catherine Zeta-Jones, Uma Thurman and Judy Greer – falling over themselves to get him in bed. Apparently audiences are supposed to find this funny… or charming… or at least entertaining. In reality, it’s just dull.

Like most modern romantic comedies, it’s easy to figure out where “Playing for Keeps” is going. What’s more, there’s no real chemistry between Butler and Biel, in large part because the backstories of their characters are hopelessly underwritten. Viewers learn that their relationship ended badly, but they are never given a complete explanation of why.

Even if these things had been fleshed out, it’s doubtful that “Playing for Keeps” would have scored. For one thing, George simply isn’t that sympathetic. He’s a good-looking sports star who carelessly blows all his money, loses the woman he loves and – only then – decides it’s time to change his ways. Some might say he deserves a few lumps.

DVD and Blu-ray extras include two featurettes on the making of the film and a collection of deleted scenes.

“Wreck It Ralph” may not have won the Oscar for best animated feature film, but that doesn’t make the movie any less worthy as a weekend rental.

The story is set in the land of video games and focuses on the fictitious title character (voiced by John C. Reilly). Despite being the star of a long-running arcade game, Ralph is dissatisfied because he’s tired of being the bad guy. During the day, his job is to smash a tall building and destroy the contents. In the meantime, the hero, Fix it Felix, makes repairs and earns medals. The work wouldn’t be so bad except that the other characters in the game treat Ralph like a pariah even once the arcade is closed.

In an effort to prove that he can do more than wreck things, Ralph leaves his game intent on earning a hero’s medal elsewhere, but he does so at great personal risk. Although a character can regenerate if killed within his or her own game, death in any other environment is fatal.

Co-writer and director Rich Moore makes countless references to real-life video games, particularly old-school gems like Pac-Man and Q*Bert, and that’s part of the fun. Parents may not be fully engaged in Ralph’s plight, but they’re sure to enjoy reminiscing about games they played as a child. Youngsters, in the meantime, should have a blast with the gorgeous computer-animated visuals.

“The Intouchables”: French drama about a quadriplegic millionaire (Francois Cluzet) who hires a poor ex-convict (Omar Sy) as his caretaker. The movie, directed by Olivier Nakache and Eric Toledano, was a nominee for best foreign language film at both the Critics’ Choice Awards and Golden Globes. Presented in French with English subtitles.

“The Twilight Saga – Breaking Dawn Part 1” – Extended Edition: Folks who decide to dip into “Breaking Dawn Part 2” may also want to check out this extended cut of “Part 1.” The release is available on DVD, Blu-ray and digital download, and it contains eight minutes of footage that has never been seen before.

“Schindler’s List” – 20th Anniversary Limited Edition: Universal Studios is trotting out a deluxe release of Steven Spielberg’s magnificent film about a real-life German businessman who protected Jews from Nazi persecution. The set includes Blu-ray, DVD and digital copies of the movie, plus a feature-length documentary containing archival footage and interviews with people familiar with the real-life story.

“Gun Hill Road”: Independent drama about an ex-convict (Esai Morales) who returns to his wife and son after three years in prison and discovers that the family dynamic has drastically changed. Judy Reyes and Harmony Santana also star. Directed by Rashaad Ernesto Green.

“A Nightmare on Elm Street Collection”: Boxed set featuring Blu-ray versions of the seven original “Elm Street” movies. The 2010 remake and “Freddy Vs. Jason” are not included.

“Duck Dynasty” – Season 2, Volume 1: Fresh collection of episodes from the A&E reality show about a Louisiana family that took a modest duck call business and turned it into a sporting goods empire.

“Regular Show” – Party Pack: Sixteen assorted episodes of the Cartoon Network animated series about a blue jay and raccoon who continually find themselves in mind-blowing situations.

“H2O – Just Add Water” – The Complete Season 1: Introduction to the Australian TV series about three teen girls who are magically transformed into mermaids.