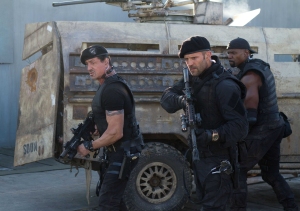 From left to right, Sylvester Stallone, Jason Statham and Terry Crews star in “The Expendables 2.”

The only major theatrical release moving to video this week is the second installment of “The Expendables” action franchise.

2 stars (out of four)
Rated R for strong bloody violence throughout
Lionsgate
Available on: Blu-ray, DVD, digital download and on demand

Sylvester Stallone’s 2010 “Expendables” movie was nothing more than an excuse to cram about a dozen action stars into a single film. Because of this, plotting and characterization played second fiddle to both the names on the marquis and the on-screen explosions.

For “The Expendables 2,” Stallone had a hand in the screenplay, but he gave directorial control to Simon West (“Con Air,” “The Mechanic”). Apparently, the agreement was that West would stick to the already-established formula because the new film is just as loud, bombastic and pointless as the original.

The simplistic plot focuses on Barney Ross (Stallone) and the band of mercenaries he commands. These are ruffians of the highest order, so when a CIA operative known as Mr. Church (Willis) asks them to retrieve a sensitive piece of intelligence from a crashed airplane, they expect a cakewalk. Alas, the mission falls apart, and a ruthless arms dealer (Van Damme) kills one of Ross’ men (Liam Hemsworth). Ross and company immediately swear revenge, and this opens the way for a barrage of gunplay, vehicle chases and hand-to-hand combat sequences.

West is good with action, and the on-screen violence is impressively staged and gory. There is joy in watching so many action stars play across from one another, but once that novelty wears thin, “Expendables 2” is just another stale action film. Other than the massive collection of talent, West doesn’t do anything to set his film apart. In fact, most of these actors do better work when they’re the sole attraction.

DVD and Blu-ray extras include deleted scenes, a gag reel, several making-of features and an audio commentary by West.

“Santa Paws 2 – The Santa Pups”: Direct-to-video feature from the creators of the ever-popular Buddies franchise. The story centers on talking Great Pyrenees pups who stow away on a sled with Mrs. Claus. Initially, they create mischief, but when the Christmas spirit begins to disappear, it’s up to the pups and Mrs. Claus to save the day.

“Cinderella II & III” – Two Movie Collection: Disney is releasing both of its “Cinderella” sequels as part of a single set. “Cinderella II” is set shortly after the original story, and it focuses on the challenges the princess faces in adapting to life at the Palace. In “Cinderella III,” the princess’ stepmother casts a spell that causes her prince to lose his memory.

“Transformers Prime” – Season Two: Twenty-six episodes of the animated series about the ongoing battle between evil Decepticons and friendly Autobots. In this season, the robot-like heroes make a discovery that could revive their long-dead planet.

“Ancient Aliens” – Season Four: Ten episodes of the History Channel show that speculates about the existence of alien life forms. One of the topics examined is the possibility that aliens could play a role in natural disasters on Earth.

“Zorro”: This 1975 film is available on DVD and Blu-ray for the first time. Alain Delon stars as the Spanish nobleman who dons a mask to secretly fight for justice. Directed by Duccio Tessari.