Video Verdict: ‘The Cabin in the Woods,’ ‘Katy Perry: Part of Me,’ ‘The Best Exotic Marigold Hotel’ 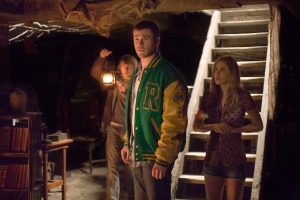 From left to right, Fran Kranz, Chris Hemsworth and Anna Hutchison star in “The Cabin in the Woods.”

This week’s major video releases include an indie drama with an outstanding cast, a documentary film featuring Katy Perry and a horror movie from one of Hollywood’s most creative artists.

The Cabin in the Woods

4 stars (out of four)
Rated R for strong bloody horror violence and gore, language, drug use and some sexuality, nudity
Lionsgate
Available on: DVD, Blu-ray and on demand

Writer-director Joss Whedon cemented his reputation as a Hollywood iconoclast when he created “Buffy the Vampire Slayer,” a TV series that tipped the horror-fantasy genre on its ear. Thankfully for viewers, he’s still going strong.

With “The Cabin in the Woods,” Whedon once again explores the horror film, delivering a clever and inventive take on the slasher genre. Whedon co-wrote the screenplay with the film’s director, Drew Goddard, and together they’ve crafted a movie that honors horror conventions, while poking fun at them. In effect, they’ve breathed new life into the genre, just as writer Kevin Williamson and director Wes Craven did with their 1996 smash, “Scream.”

The plot centers on five college students who travel to a remote cabin for a weekend getaway. Each roughly represents a horror movie stereotype. Dana (Kristen Connolly) is the good girl recovering from a bad relationship, Curt (Chris Hemsworth) is the confident stud, Jules (Anna Hutchison) is the temptress, Marty (Fran Kranz) is the stoner and Holden (Jesse Williams) is the scholar. Anyone who’s watched more than a handful of scary films knows that this setup necessarily results in the characters being killed one by one.

Whedon and Goddard don’t disappoint on that front, but they do add significant twists while creating fascinating explanations for horror movie constants. They assume viewers know the genre, and they use that knowledge to create enjoyable in-jokes, unexpected laughs, and a finale that’s a bizarre mix of spectacle, drama and surprise.

The cast is a hoot as well. With his portrayal of Thor in the Marvel Comics movies, Hemsworth has rapidly become a superstar, but his young peers easily match his efforts. The film also includes veterans Richard Jenkins and Bradley Whitford, and they give the movie a sense of polish and class that isn’t always found in genre efforts.

Goddard, although this is his directorial debut, doesn’t seem at all green. The movie’s pacing is pitch perfect, and he strikes a fine balance between suspense, humor and creativity. In other words, he and Whedon have crafted a movie that other filmmakers should study for years to come.

DVD and Blu-ray extras include several making-of featurettes and a Q&A and audio commentary with Whedon and Goddard.

Katy Perry The Movie – Part of Me

From an outsider’s perspective, Katy Perry’s rise to fame seems astonishingly fast, but the documentary film “Part of Me” is a reminder that overnight success is rare. Perry toiled in relative obscurity for more than seven years before her career exploded with the hit single “I Kissed a Girl,” and “Part of Me” walks viewers through each step of her journey.

These days, paparazzi follow the singer everywhere, but that wasn’t always the case. Because early footage is limited, her childhood is recounted mostly through on-screen interviews, both with Perry and those close to her.

It’s always fascinating to learn about the rise of a pop star, and directors Dan Cutforth and Jane Lipsitz had tremendous access when making their film. That means viewers are often in Perry’s dressing room or watching as she greets fans before and after shows. At 93 minutes, “Part of Me” isn’t long enough or deep enough to really put viewers inside Perry’s head, but it offers a nice introduction to her music and career.

It’s also an interesting cultural artifact because Perry allowed the cameras to roll even as her marriage to comedian Russell Brand was dissolving. It’s depressing to see Perry morph from a bubbly, optimistic kid to a heartbroken young woman, but there’s no denying the onscreen drama.

The best pieces of “Part of Me” are not, however, those devoted to Brand. They’re the interviews with family and friends that explain just how driven she is. Of course, the concert clips are a close second. “Part of Me” isn’t a concert film, per se, but Perry’s music is everywhere, and Cutforth and Lipsitz do a nice job capturing the spectacle that is one of her shows.

The DVD-only release doesn’t have any extras, but the movie is available on a Blu-ray/DVD combo pack that includes extended versions of musical sequences and behind-the-scenes shorts.

Director John Madden (“Shakespeare In Love,” “The Debt”) has assembled a cast of the first order for “The Best Exotic Marigold Hotel,” a quirky dramedy about life, love and the ability to reinvent one’s self at any age.

The story follows the exploits of several British retirees who – for varied reasons – opt to spend their golden years in a senior residence in Jaipur, India. Although they’re wooed to the hotel by flashy advertisements depicting the facility as heaven on Earth, they arrive to find that it’s only moderately livable. Nevertheless, everyone stays, in large part thanks to the energy and optimism of the young hotel manager, Sonny Kapoor (Dev Patel).

In fact, it was Sonny’s idea to turn the struggling hotel into a senior home where he could “outsource old age.” That may sound cold, but audiences need only a few minutes with the young hotel manager to see that his heart is in the right place. He desperately wants to keep the business alive not only because he loves it, but because it was cherished by his deceased father. Still, Sonny’s mother and siblings are pressuring him to close the unprofitable venture.

Although the hotel isn’t what the retirees expected, they all settle into life in India, some of them embracing the new culture and others going into shock. On the latter front, there’s Jean Ainslie (Penelope Wilton), a pampered Brit who is horrified by everything from the food to the fast-paced life in the city. Making things tougher is the fact that Jean’s husband, Douglas (Bill Nighy), is enamored with their new lifestyle.

For Graham Dashwood (Tom Wilkinson), a retired judge, the retirement trip is a homecoming. He lived in India as a younger man, and he is desperate to set an old relationship right. Widow Evelyn Greenslade (Judi Dench) arrives with no expectations but soon learns to relish life at the hotel, especially since she is living independently for the first time in years. Likewise, Madge Hardcastle (Celia Imrie) sees life in India as a chance to escape and start fresh.

Crotchety Muriel Donnelly (Maggie Smith) isn’t so excited about the change of pace. In fact, she’s a bigot. But when she learns that the wait for a surgery she desperately needs can be cut short in Jaipur, she decides to make the best of the situation.

There’s a lot of star power in “The Best Exotic Marigold Hotel” and all the players deliver. Also, Madden paces the film nicely and does a reasonably good job giving everyone a fair share of screen time. Because there are so many characters, a few plot threads aren’t tied up as tidily as they should be. Also, the movie is filled with predictable moments.

These flaws are disappointing, but they only slightly dampen the wonderful work of the cast and the genuinely sweet nature of the storytelling.

“Indiana Jones” – The Complete Adventures: In crafting the Indiana Jones movies, writer-producer George Lucas and director Steven Spielberg made film history. It’s difficult to think of an adventure franchise that has been more influential, and that makes this five-disc Blu-ray set a treat. Of the four movies, only the last – “Indiana Jones and the Kingdom of the Crystal Skull” – was previously available on Blu-ray. Since the first three films are easily the best, it’s nice to see them get the high-definition treatment. Both “Indiana Jones and the Temple of Doom” and “Indiana Jones and the Last Crusade” were remastered for this release, and the original movie – “Raiders of the Lost Ark” – was restored frame by frame. Hardcore fans will appreciate the fact that the set includes more than seven hours of extra features.

“Suburgatory” – The Complete First Season: This ABC sitcom tells the story of a New York City teen (Jane Levy) who is horrified when her father (Jeremy Sisto) moves the family to the suburbs for a “better” life. These first 22 episodes did well enough to prompt a second season, which is premiering Oct. 17.

“Beverly Hills Chihuahua 3 – Viva La Fiesta!”: The original “Beverly Hills Chihuahua” was such a big hit that it has now spawned two direct-to-video sequels. In this installment, the much loved Chihuahuas Papi and Chloe move with their human families into a luxury hotel. Unfortunately, one of their offspring has an identity crisis, so it’s up to them to save the day. The film features the voices of George Lopez, Odette Annable, Kay Panabaker and Emily Osment.

“The Magic of Belle Isle”: Writer-director Rob Reiner delivers the story of an uninspired novelist (Morgan Freeman) who tries re-energize his work by moving into a picturesque cabin. Virginia Madsen also stars.

Two films by Marcel Carne: The Criterion Collection is releasing two films by French director Marcel Carne: “Les visiteurs du soir” (1942) and “Children of Paradise” (1945). The former tells the story of two of the Devil’s disciples sent to ruin a wedding. The latter is Carne’s best-known work, and it centers on a 19th century woman being courted by four men.

“Hawaii Five-O” – The Second Season: This police drama, starring Alex O’Loughlin as the head of an elite crime-fighting squad, continues to draw solid ratings for CBS. In fact, the show is returning for its third season Sept. 24. That means viewers only have a week to get up to speed with the 23 episodes presented here. Scott Caan, Daniel Dae Kim, Grace Park and Masi Oka also star.

“The Mentalist” – The Complete Fourth Season: The 24 latest episodes of the popular CBS drama about a former professional psychic (Simon Baker) who uses his gifts to help solve crimes.