Video Verdict: ‘This Means War,’ ‘The Woman in Black,’ ‘The Secret World of Arrietty’ 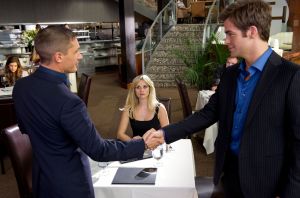 In “This Means War,” Tom Hardy, left, and Chris Pine, right, play best pals and secret agents who battle it out over a beautiful woman (Reese Witherspoon, center).

3 stars (out of four)
Rated PG-13 for sexual content including references, some violence and action, and for language
20th Century Fox
Available on: DVD, Blu-ray and digital download

Love triangles have long been fodder for romantic comedies, but director McG (“Charlie’s Angels,” “Terminator Salvation”) has taken things to a heightened level with “This Means War,” the story of two CIA agents (Chris Pine and Tom Hardy) who are best friends… until they start dating Lauren, a beautiful woman who’s attracted to both of them (Reese Witherspoon).

When the men discover they’re romantic rivals, they make a gentlemen’s agreement, promising not to reveal that they know each other until Lauren decides between them. As admirable as this stance may be, it’s not long before both men are using CIA resources to spy on one another and sabotage each other’s dates.

Pine and Hardy have good chemistry with each other and – more importantly – with Witherspoon. Because of this, it’s easy to get sucked in, even though the plotting is about as basic as it gets. McG’s films have been hit and miss, but “This Means War” is among his best.

The film is consistently funny and – thanks to the espionage backdrop – has generous helpings of action. That means ladies who have a hard time selling their significant others on romantic comedies can successfully argue that this isn’t just another chick flick.

The Woman in Black

When an actor spends years playing an iconic role, it can be difficult for him to achieve success with another part, but Daniel Radcliffe is intent on proving there’s life after Harry Potter. In his first major post-Potter role, Radcliffe plays Arthur Kipps, an early 20th century solicitor hired to liquidate a creepy estate in the English countryside.

Arthur isn’t the ideal person to be working in a large, spooky manor because he already has mortality on his mind. His wife died in childbirth, leaving him deeply scarred and concerned about the future of his four-year-old son.

Nevertheless, Arthur charges forward, performing his duties even as increasingly strange things happen around him. First, Arthur sees a frightening woman in black hanging around the deserted manor house. Then, a local child dies, reinforcing a legend that a ghost is avenging the death of her son.

Radcliffe is good in the leading role, proving he can break free of the Harry Potter chains as long as he has the right material to work with. It helps that director James Watkins moves the action at a steady pace, making sure the film is both suspenseful and littered with unexpected scares.

The biggest flaw with “The Woman In Black” is an ending that isn’t as strong as the rest of the movie. But that’s nitpicking. Overall, it’s a winning ghost story that should help Radcliffe transition to a new era.

DVD and Blu-ray extras include a making-of feature, a short about Radcliffe’s role in the film and an audio commentary by Watkins and screenwriter Jane Goldman.

The Secret World of Arrietty

Anime is developing an increasingly devoted following in the U.S., and it’s projects like “The Secret World of Arrietty” that demonstrate why. The film, which debuted overseas with a Japanese voice cast, is a blend of visual elegance and first-rate storytelling that viewers of all ages can enjoy.

Since a good portion of the American audience is sure to be youngsters, a first-rate English voice cast was recruited for the North American release. This group includes Bridgit Mendler, Amy Poehler, Will Arnett and Carol Burnett. All of them do an outstanding job, and there are no awkward audio moments like those commonly encountered with English-language dubs of live-action movies.

The story itself is based on “The Borrowers,” the Mary Norton fantasy novel about tiny people – or borrowers – living within the walls of human homes. This material has, of course, been adapted to the screen before, perhaps most famously in the 1997 “Borrowers” movie starring John Goodman and Jim Broadbent.

One needn’t compare “Arrietty” to other works, however, because it stands beautifully on its own. The movie marks the directorial debut of Hiromasa Yonebayashi, and his work is impressive. Of course, much credit also goes to the first-rate screenplay, which was co-written by Keiko Niwa and Japanese-animation legend Hayao Miyazaki.

Much of the plotting centers on a young Borrower (voiced by Mendler) who befriends a human boy (David Henrie) living in the home she inhabits. Their relationship is sweet, but it proves dangerous because not every human is friendly toward the little people.

Most likely because it’s a foreign film, “Arrietty” didn’t post huge box office numbers in the U.S. Here’s hoping it garners more attention on home video because it has what it takes to satisfy the masses.

DVD and Blu-ray extras include the music video for “Summertime,” a song performed by Mendler.

“Certified Copy”: Drama centered on the rapidly shifting relationship between a British writer (opera singer William Shimmell) and a French antiques dealer (Juliette Binoche). Released in the U.S. in 2011, the movie was written and directed by Abbas Kiarostami. Presented in French, English and Italian with English subtitles.

“Perfect Sense”: Romance centered on a chef (Ewan McGregor) who falls in love with a scientist (Eva Green) as a pandemic is causing people to lose their sensory perceptions. Directed by David Mackenzie.

“Route 66” – The Complete Series: This 24-DVD set includes all 116 episodes of the 1960s TV show about two friends travelling across America in a Corvette. Martin Milner, George Maharis and Glenn Corbett star. Bonus materials include vintage commercials and a 1990 William S. Paley Television Festival Panel featuring Maharis and others involved with the show.

“Rizzoli & Isles” – The Complete Second Season: The third season of the crime drama “Rizzoli & Isles” premieres on TNT June 5. That means fans have about two weeks to get through the 15 episodes included on this set. Angie Harmon stars as homicide detective Jane Rizzoli and Sasha Alexander plays medical examiner Maura Isles.

“My Babysitter’s a Vampire” – The First Season: Disney Channel series about several teenagers – including a vampire – who fight it out with supernatural creatures. This set includes all 13 season one episodes, plus the TV movie that kicked everything off. Matthew Knight, Atticus Dean Mitchell and Vanessa Morgan star.

“Carol Channing – Larger Than Life”: Documentary film about Channing, an actress and singer. Co-written and directed by Dori Berinstein.

“Ray Romano – 95 Miles to Go”: Documentary film centered on a standup comedy tour that Ray Romano and his friend Tom Caltabiano embarked on after finishing work on “Everybody Loves Raymond.” Caltabiano not only stars, he served as director.