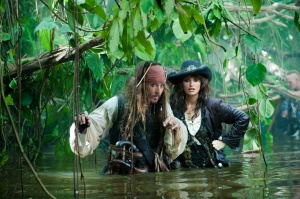 Johnny Depp, left, and Penelope Cruz search for the Fountain of Youth in “Pirates of the Caribbean: On Stranger Tides.”

This week’s major home video releases range from a risqué R-rated comedy featuring Cameron Diaz to the latest installment of the uber-popular “Pirates of the Caribbean” franchise.

Pirates of the Caribbean: On Stranger Tides

Disney’s “Pirates of the Caribbean” films may have started as multi-pronged tales that focused as much on lovers Will Turner (Orlando Bloom) and Elizabeth Swan (Keira Knightley) as flamboyant pirate Jack Sparrow (Johnny Depp), but somewhere along the line, Sparrow stole the show. In “Pirates of the Caribbean: On Stranger Tides,” Will and Elizabeth are nowhere to be found, meaning director Rob Marshall – helming the series for the first time – was able to focus his attention entirely on Jack.

This new direction could have reinvigorated the series had “Stranger Tides” received the sort of script a $250 million blockbuster deserves. But, as with most of the “Pirates” films, storytelling takes a backseat to spectacle, leaving viewers with a movie that falls flat despite several dazzling sequences. “Stranger Tides” is at its best early on when Jack – risking his neck to rescue his first mate (Kevin McNally) from the gallows – races across London with authorities in pursuit. This chase is a rousing way to kick off an adventure film, and Marshall displays considerable visual flair. Sadly, the remainder of the movie can’t keep pace.

The plotting centers on a search for the Fountain of Youth, a treasure sought by multiple parties, including King George II of England (Richard Griffiths). Jack gets tangled in the quest because he is one of the few people who has seen a map of the fountain’s location.

In place of Will and Elizabeth, screenwriters Terry Rossio and Ted Elliott give us Angelica (Penelope Cruz), a rugged-but-beautiful, seafaring lady who claims to be the daughter of the fearsome pirate Blackbeard (Ian McShane). Not only is she handy on a ship, she shares a romantic history with Jack, assuring that their interactions are tense.

Marshall also allows Geoffrey Rush to return as Jack’s rival, Captain Hector Barbossa, so the movie has a lot of star power despite Bloom’s and Knightley’s departure. It also, arguably, has too much going on. Tightly focused features are generally more entertaining than those attempting epic status and, at 136 minutes, “Stranger Tides” spends a lot of time looking for itself.

The movie has some outstanding swashbuckling moments – the type that turned this series into a juggernaut – but it also drags too often, bogged down by its myriad characters and subplots.

Home video extras include a blooper reel, animated “Pirates of the Caribbean” shorts (by LEGO) and an audio commentary by Marshall.

2½ stars
Rated R for sexual content, nudity, language and some drug use
Sony
Available on: DVD, Blu-ray and digital download

The problem with basing a film around a character with few redemptive qualities is that this character will be fighting for audience approval from moment one … and she may never receive it. Elizabeth Halsey (Cameron Diaz) is just such a creature. Admittedly selfish and unrepentantly lazy, Elizabeth’s sole goal is to marry a rich man so she can quit her job as a middle school teacher. Alas, her engagement to a prime prospect falls through, forcing her to continue teaching in order to pay the bills. Of course, most people wouldn’t consider what Elizabeth does teaching. Her curriculum mostly involves showing movies while she downs miniature bottles of booze. That’s not to say Elizabeth lacks motivation. She is, in fact, determined to raise $10,000 to pay for breast enhancement surgery.

“Bad Teacher” was written by Gene Stupnitsky and Lee Eisenberg – both writers and producers on the TV show “The Office” – and it has some genuinely funny moments. The trouble is, the audience has to get dirty to laugh at them. In other words, it has to identify with Elizabeth.

In a sense, “Bad Teacher” celebrates self-centered behavior and the shirking of one’s responsibilities. Yes, Elizabeth undergoes a sort of transformation during the movie, realizing that there’s more to life than money. Her transformation is limited, however, and it comes at the expense of characters with superior moral values. Because of that, one wonders what message director Jake Kasdan is hoping to send. The film seems to say, “It’s OK to be a gold digger as long as your exploits are funny.”

That’s not exactly a laudable moral, but Kasdan gets points for doing the funny right. There is something sadly comical about watching an authority figure mercilessly abuse her power, and Diaz really lays into her role. She also gets solid supporting work from Lucy Punch, Jason Segel and Justin Timberlake. Each plays one of Elizabeth’s quirky colleagues and each moves the action forward in an entertaining fashion.

All of this makes “Bad Teacher” an odd entity. It’s not the sort of film one watches in hopes of an intelligent and meaningful takeaway, but it does provide its share of cheap laughs.

The DVD and Blu-ray releases of the movie feature both the theatrical cut and an unrated edition. Other extras include outtakes, deleted scenes and a behind-the-scenes bit with Segel and Timberlake.

Writer-director Kevin Smith’s latest project has probably attracted more attention due to Smith’s pre-release antics than for the movie itself. Leading up to the Sundance film festival, the filmmaker promised to sell “Red State” in an auction at a special festival event. Then, at that event, he announced that he was purchasing the movie for self-distribution. This created controversy in the industry, and the film ultimately received an extremely limited theatrical release before becoming an on-demand option Sept. 1. This week, “Red State” is getting a wider rollout on DVD, Blu-ray and digital download.

Distribution quirks aside, the film marks an interesting turn in Smith’s career. The filmmaker made his name with earthy and provocative comedies like “Clerks” and “Dogma,” but “Red State” is a different animal altogether. It contains some of Smith’s screenwriting hallmarks, including lengthy, dialogue-heavy character rants, but the film is no comedy. Rather, it’s an oddball hybrid of religious commentary, political drama and grindhouse horror.

The film begins by introducing viewers to Travis (Michael Angarano), Billy Ray (Nicholas Braun) and Jarod (Kyle Gallner), three teen boys who decide to accept an older woman’s (Melissa Leo) online invitation for sex. When they show up at her house, she drugs them.

The next thing the teens know, they are captives of the Five Points Church, an extreme religious group led by the charismatic-but-violent Abin Cooper (Michael Parks). Cooper and his family of followers have made it their mission to dole out Biblical justice to anyone that they believe has violated God’s rules, and that puts the boys in a frightening situation.

The early setup is reminiscent of pure horror films, like “Hostel” and “Saw,” but Smith forces the project into a sharp turn when he introduces Joseph Keenan (John Goodman), a grizzled ATF agent who receives orders to investigate Cooper’s Five Points compound. Once Keenan arrives, the film forces viewers to ponder a number of serious questions, many of them regarding the power that religious and political organizations hold over society. That’s not to say Smith’s film is high minded. At the core, it’s a low-budget horror flick, but it certainly has more brains than most films in its genre.

Still, Smith misses opportunities. Although the movie starts with an intense, well-developed plot and makes nice turns along the way, it begins to unravel as it heads toward conclusion. “Red State’s” ending is particular dissatisfying, as it not only undermines the suspense built up throughout, it feels as though Smith simply ran out of ideas.

DVD and Blu-ray extras include a making-of feature, an audio commentary by Smith, deleted scenes, and the speech that Smith gave to introduce the film at Sundance.

“Monte Carlo” is supposed to be an exciting girl-power comedy bolstered by gorgeous French backdrops. In actuality, it’s a tired, poorly scripted mess that couldn’t exist without Selena Gomez’s legions of tween fans.

Gomez plays Grace, a Texas girl who has long dreamed of a trip to Paris. So, after she graduates high school, her parents allow her to take the journey with her best friend, Emma (Katie Cassidy). The only catch is that her conservative, older stepsister, Meg (Leighton Meester), has to accompany them. Since Grace and Emma aren’t keen on touring France with a killjoy, there’s tension at the outset, and things get worse when their tour turns out to be a downer.

Everything turns around, however, when Grace is mistaken for wealthy, British socialite Cordelia Winthrop Scott (Gomez again). Against Meg’s better judgment, the girls decide to take advantage of the confusion and find themselves whisked away on a once-in-a-lifetime adventure in Monte Carlo.

The film’s European backdrops are glamorous and inspiring but the script is a weak rehash of better movies, ranging from “The Sisterhood of the Traveling Pants” to “The Princess Diaries.” The plotting is predictable, the ending is ludicrous and Gomez isn’t quite up to playing the double roll, all of which creates a massive misfire for director Thomas Bezucha (“The Family Stone”).

“A Better Life”: Director Chris Weitz (“About a Boy,” “The Golden Compass”) delivers a drama about an illegal immigrant trying to carve out a living in East Los Angeles while also protecting his son from the influence of local gangs. Demian Bichir stars.

“Page One – The Inside Story of the New York Times”: Documentary film that takes viewers inside the operations of one of America’s largest and most prestigious news organizations. The movie, directed by Andrew Rossi, features interviews with a number of notable journalists including Bill Keller, Tim Arango and David Carr.

“Attack on Leningrad”: Historical drama about a U.S. journalist (Mira Sorvino) stranded in Leningrad when the Nazis invade during the winter of 1941. The film was written and directed by Alexander Buravsky. Gabriel Byrne also stars.

“Robotech” – The Complete Series: All 85 episodes of the 1980s animated series about humans who use robotic technology to fight off threats from alien invaders. The series is being delivered on an impressive, 17-disc set that includes more than 10 hours of bonus material.

“Kuroneko”: The Criterion Collection is releasing this 1968 horror film by Japanese director Kaneto Shindo. The movie tells the story of a military hero sent to investigate the mysterious deaths of several samurai. Presented in Japanese with English subtitles.

– Forrest Hartman is an independent film critic whose byline has appeared in some of the nation’s largest publications.  E-mail him at forrest@forresthartman.com.