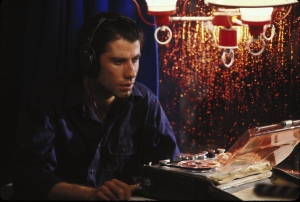 It’s a relatively slow week for video, with no major theatrical releases moving to the home format. That makes it the perfect time to delve into an oldie, like the Criterion Collection’s freshly restored release of Brian De Palma’s “Blow Out.”

Blow Out
3 stars (out of four)
Rated R
Criterion Collection
Available on: Blu-ray and DVD

When writer-director Brian De Palma made “Blow Out” in 1981, he had already established himself as a talented purveyor of thrillers, most notably with 1980’s “Dressed to Kill” and his 1976 Stephen King adaptation “Carrie.” It therefore came as no surprise that “Blow Out” was sharp, stylish and as suspenseful as Alfred Hitchcock’s finer works.

Watching today, it’s difficult to separate the movie from its era. Everything from the funky Pino Donaggio score to De Palma’s use of split screen, call attention to the fact that it is a child of the early ’80s. What’s more remarkable, however, is the fact that these surface features do nothing to dull the story that first thrilled audiences 30 years ago. Yes, “Blow Out” is dated, but not in the manner that draws audiences out of a picture. Rather, De Palma’s film draws the viewer in, offering both a thrilling and dramatic journey and a tasty slice of ’80s pop culture.

The story centers on Philadelphia filmmaker Jack Terry (27-year-old John Travolta). A sound effects man, Jack is outdoors making recordings when a car careens into a pond, trapping a man and woman inside. He’s able to rescue the girl, but the man drowns.

Within hours, Jack learns that the deceased driver was a high-profile political candidate and, after reviewing tapes he made at the time of the crash, he becomes convinced that the accident was actually an assassination. Jack compiles more and more evidence supporting his theory while growing increasingly close to the woman he saved from the wreck, a flighty beauty named Sally (Nancy Allen).

Travolta is outstanding in the lead role, and its fun to look back on his early work knowing the icon he has become. Allen’s performance is stilted, particularly by today’s standards, but she is convincing enough to keep the plot moving forward, and she is at her best during the picture’s climactic final moments. John Lithgow and Dennis Franz are also terrific in supporting roles.

“Blow Out” isn’t a perfect film, as De Palma’s script offers a handful of plot points that are never fully realized. Still, his stylish visuals and flair for suspense bury the problems deeply enough that most viewers will be able to overlook them.

Criterion Collection’s Blu-ray and DVD releases of “Blow Out” feature a digital transfer that was supervised and approved by De Palma himself. The movie looks terrific and both releases are packed with extra features, including a new hour-long interview with De Palma and fresh interviews with Allen and cameraman Garrett Brown.

“Human Planet”: Home video release of the impressive BBC/Discovery series about humanity and our relationship to the natural world. The documentary project was filmed in more than 70 locations, and it tells dozens of stories about people adapting to life on our planet, often under torturous conditions. The American version of the show just finished airing on Discovery Channel, and this release – available on DVD and Blu-ray – features three hours of footage not shown in the U.S. Actor John Hurt narrates.

“Upstairs Downstairs”: It’s a fantastic week for BBC releases, as we’re getting both “Human Planet” and this modern take on the popular 1970s English television series. Built on the same premise as the original show, which considered the lives of a group of servants and their “masters,” this collection features many fresh characters. When a new family buys 165 Eaton Place, former parlor maid Rose (Jean Marsh) is charged with recruiting more servants to get things running. Keeley Hawes, Ed Stoppard, Dame Eileen Atkins and Claire Foy also star.

“3 Idiots”: Bollywood comedy about a group of college buddies who go in search of a friend they’ve lost track of. The movie was a massive hit in India but saw only a limited release in the U.S. Co-written and directed by Rajkumar Hirani.

“Kes”: Director Ken Loach’s 1970 film about a working-class, English teen (David Bradley) who forms a bond with a wild kestrel. The feature was named one of the 10 best British films of the century by the British Film Institute, and the Criterion Collection is delivering a freshly restored digital transfer on Blu-ray and DVD.

“Bunny and the Bull”: Offbeat comedy centered on a reclusive man (Edward Hogg) who relives a wild trip through Europe without ever leaving his apartment. Simon Farnaby also stars. Directed by Paul King.

“Stan Lee’s Superhumans” – Season One: All eight first-season episodes of the documentary series co-hosted by comic book guru Stan Lee and contortionist Daniel Browning Smith. Together, they tell the stories of real-life people with unusual mental and physical gifts.

Forrest Hartman is an independent film critic whose byline has appeared in some of the nation’s largest publications. E-mail him at forrest@forresthartman.com.