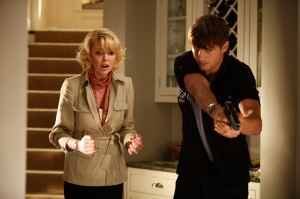 Katherine Heigl’s character, left, learns that her hubby (Ashton Kutcher) knows a thing or two about guns in the romantic adventure “Killers.”

This week’s major video releases are all over the map in terms of both content and quality. There’s an intimate drama starring Michael Douglas, a goofy comedy based on a “Saturday Night Live” skit and a romantic thriller featuring Ashton Kutcher and Katherine Heigl.

For a few minutes it seems as though “Killers” has the potential to be an enjoyable, if predictable, romance. The film does, after all, feature Ashton Kutcher and Katherine Heigl, two of today’s more attractive and affable stars. Ladies should like the fact that Kutcher spends a good portion of the film’s introduction with his shirt off, and guys will like the fact that Heigl is falling all over him. Trouble is, the film’s promising introduction gives way to a 100-minute feature that loses steam moment by moment.

Kutcher plays Spencer Aimes, a CIA assassin who wants to settle down to a normal life. Heigl is Jen Kornfeldt, a recently dumped beauty who wants a guy she can depend on. They meet and it seems like a match made in heaven. Spencer’s boss doesn’t want him to leave the spy game, but he does nonetheless. Everything is fine until, after several years of married bliss, Spencer becomes the target of multiple assassins.

This comes as a shock to Jen because Spencer failed to tell her about his past. Were this to happen to a normal couple, they’d probably split up. But, because this is a movie, Jen and Spencer spend much of the remainder of the film bickering … and it’s really annoying.

Director Robert Luketic (“21,” “The Ugly Truth”) does a surprisingly good job with the action sequences, and they break up the tedium. They don’t, however, erase it.

DVD and Blu-ray extras include a behind-the-scenes featurette, a gag reel and deleted, alternate and extended scenes.

MacGruber
1½ stars
Both DVD and Blu-ray releases contain rated and unrated versions of the film. The rated version received an R for strong crude and sexual content, violence, language and some nudity
Universal
Available on: DVD, Blu-ray, on-demand and digital download

When comedian Will Forte plays his MacGruber character in short-form sketches on “Saturday Night Live,” the bits range from passable to funny. Sadly, those same adjectives are too kind for the character’s big screen debut.

Forte and director Jorma Taccone may have been shooting for the stars with “MacGruber,” but all they achieved is an unfortunate reminder that three minutes of funny is easier than 90.

MacGruber is a government agent with more than a passing resemblance to the 1980s and early ’90s television character MacGyver. The latter figure could worm his way out of tight spots by turning everyday items into useful devices, and MacGruber attempts the same. Admittedly, Forte’s hammy portrayal – complete with ’80s hair and clothing – is chuckle-worthy, but the added run time of a feature film doesn’t add depth. And why would it? The character has always been a quick sketch, not an iconic television figure begging for backstory.

What the film treatment does offer is an R rating, and Forte, Taccone and co-writer John Solomon take advantage by including explicit language and several bits that would be too hot for TV. Still, it’s obvious they were scrambling for plotting.

During the course of the movie, they parody not only “MacGyver,” but a host of other action flicks. If you’re a fan of the genre, it won’t take you long to realize it’s all one long cliché. For instance, MacGruber’s old boss (Powers Boothe) must track him down in the jungle and beg him to return to active duty. When MacGruber agrees, he is expected to take on an inexperienced young partner (Ryan Phillippe).

Sound familiar? Of course, it does. Forte, Taccone and Solomon know their action flicks, and that’s a plus. Sadly, they don’t realize that great satire requires inventiveness not just exaggerated mimicry.

DVD and Blu-ray extras include a deleted scene, gag reel and an audio commentary with Taccone, Forte and Solomon.

During a key moment in “Solitary Man,” Ben Kalmen (Michael Douglas) expresses the belief that a man is always alone during both the high and low points of his life. His longtime friend, Jimmy (Danny DeVito), disagrees but Ben isn’t the sort who cares what others think. In fact, Ben’s feelings on solitude probably stem from the fact that he’s downright selfish.

A 60-something, Ben watched his extraordinarily successful career as an auto dealer crumble thanks to shady business dealings. Then, he left his lovely wife, Nancy (Susan Sarandon), to become a womanizer. Although he maintained his relationship with his daughter (Jenna Fischer), he treats her more like a wingman than his offspring. In other words, Ben went from society top dog to world-class cad, and viewers spend much of “Solitary Man” watching him dig an ever-deeper hole for himself.

Why would anyone care to see a film about a self-obsessed conman entering his golden years? Well, primarily because he’s played by Douglas, who delivers one of the finer performances of an outstanding career. Ben may be a jerk but he’s also extraordinarily charismatic, which explains why his new girlfriend (Mary-Louise Parker) is insistent that he escort her 18-year-old daughter (Imogen Poots) to his alma mater for a college interview. She’s convinced that Ben’s bad reputation means nothing when compared to the college library he financed during his glory days, and she has a point. What she doesn’t have is a sense of how wretched Ben has become.

Douglas, along with directors Brian Koppelman and David Levien, do such a fine job dragging viewers into Ben’s world that it’s tough not to get invested. Yes, he’s a sleazebag, but he’s such a charismatic sleazebag that you might just like him anyway.

DVD and Blu-ray extras include a featurette about the making of the movie and an audio commentary with Koppelman, Levien and actor Douglas McGrath.

“The Loss of a Teardrop Diamond”: Based on a screenplay by Tennessee Williams, this movie focuses on the unlikely love affair between a socialite (Bryce Dallas Howard) and laborer (Chris Evans). Their differing social statuses put pressure on their relationship, and things get really ugly when a priceless diamond disappears. Mamie Grummer, Will Patton, Ann-Margret, and Ellen Burstyn also star.

“That Evening Sun”: Emmy Award winner and Oscar nominee Hal Holbrook plays Abner Meecham, an elderly Tennessee farmer who is betrayed by his son, Paul (Walton Goggins). Not only does Paul put Abner in a nursing home, he leases the family farm to his father’s nemesis (Ray McKinnon). The film won a number of awards on the festival circuit, and Holbrook’s late wife, Dixie Carter, also stars.

“Chuck” – The Complete Third Season: This action comedy about a sweet-but-nerdy guy who has America’s state secrets downloaded to his brain is one of the most compelling shows on television. It returns to NBC for a fourth season on Sept. 20, so folks have about two weeks to get up to speed with the 19 episodes on this set. Zachary Levi, Yvonne Strahovski, Joshua Gomez and Adam Baldwin star.

“Smallville” – The Complete Ninth Season: Believe it or not, this young-adult superhero drama will enter its 10th season this month. The show focuses on the early days of Clark Kent (aka Superman), before he donned the blue suit and cape. Season nine is noteworthy because Clark (Tom Welling) develops a closer bond with Lois Lane (Erica Durance) and is forced to spar with other Kryptonians.

“Supernatural” – The Complete Fifth Season: Science fiction program starring Jared Padalecki and Jensen Ackles as brothers who battle demons and other supernatural foes in hopes of preventing the Apocalypse. This set releases all 22 episodes from season five just in time for fans to prep for the show’s Sept. 24 return to TV.

“Less Than Perfect” – Season One: This mid-2000s sitcom about inter-office relationships and rising to the top of the business world is making its DVD debut. The ensemble cast includes Sara Rue, Andy Dick, Eric Roberts and Sherri Shepherd.

“Boy Meets World” – Seasons one, two and three: Lionsgate is re-releasing the first three seasons of this 1990s series about coming of age in suburbia. The show’s cast includes Ben Savage, Rider Strong, Danielle Fishel, Will Friedle and William Daniels. Each season is available individually.

Fall cartoons from Warner Brothers: Summer is winding down, and Warner is celebrating with the release of titles from both the Peanuts gang and Bugs Bunny. For starters, the studio is offering the Blu-ray debuts of two holiday classics: “A Charlie Brown Thanksgiving” and “It’s the Great Pumpkin Charlie Brown.” To get Bugs in on the action, the Warner crew blended classic cartoon shorts with newer footage and created “Bugs Bunny’s Howl-Oween Special.”

“Wade in the Water, Children”: Documentary considering what the devastation of hurricane Katrina has meant to the children of New Orleans. The film includes everything from private videos and interviews to footage of school-day experiences.

“Mickey Mouse Clubhouse – Road Rally”: This full-length feature adventure with Mickey and the gang is available on DVD the same day it’s debuting on the Disney Channel. The story has Mickey and his pals, including Donald Duck, Goofy and Pluto, participating in a wild road rally across varying terrain. DVD extra features include interactive activities for preschoolers.

“Thomas & Friends – Misty Island Rescue”: This new animated adventure marks the first time that Thomas and his pals are available on a Blu-ray release (although the title is out on DVD as well). The story sends Thomas on a trip where he is lost at sea and ends up on a mysterious island. Bonus features include two karaoke music videos and a game.