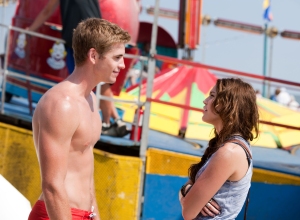 Liam Hemsworth, left, and Miley Cyrus make a connection in “The Last Song.”

Only two major theatrical releases are making their way to home video this week. One is a goofy children’s film starring Brendan Fraser. The other is a weepy romance featuring a screenplay by Nicholas Sparks.

The Last Song
3 stars (out of four)
Rated PG for thematic material, some violence, sensuality and mild language
Touchstone
Available on: DVD and Blu-ray

Novelist Nicholas Sparks has never been subtle, and he stays true to form with “The Last Song,” a film best approached by an audience ready to throw itself into every weepy twist.

The story, from a screenplay co-written by Sparks, is centered on Ronnie Miller (Miley Cyrus), a troubled teen whose parents have separated. When she and her brother, Jonah (Bobby Coleman), are sent to live with their father in Georgia for a summer, she rebels. But she slowly comes around, in large part due to a chance meeting with a handsome stud named Will (Liam Hemsworth).

Will is the kind of guy who only appears in movies. He plays competitive volleyball and works as a mechanic, but he also quotes Tolstoy and does volunteer work for the local aquarium. Oh, and he’s extraordinarily wealthy.

Ronnie, on the other hand, is a character who appears regularly real life. She’s pretty, but also angry and prone to wildly unreasonable mood swings. Why Will would be drawn to her isn’t entirely clear, but Sparks is one of those love-at-first-sight writers, and you have to give him his premise, right?

While the romance between Will and Ronnie is central to the plotting, Ronnie’s relationship with her father, Steve (Greg Kinnear), is even more important. He’s been an absentee dad for some time, and Ronnie resents that. Still, he’s a good guy, so viewers can pull for reconciliation.

Clearly, Cyrus is overmatched by the actors around her. Kinnear is always terrific, and Hemsworth is awfully good at playing a larger-than-life romantic interest. Cyrus, on the other hand, relies heavily on melodramatic posturing. Normally, that would be a killer, but in a Sparks film it’s almost a plus. The writer makes no bones about manipulating his audience, and he has crafted a story that is both sweet and capable of milking tears from the eyes of all but the most jaded.

“The Last Song” may not be great cinema, but it serves a purpose. And for the right audience – one looking to pontificate on love on a Friday or Saturday night – it earns a hearty recommendation.

DVD extra features include a set tour by Coleman, Cyrus’ “When I Look At You” music video and a bit on making that video. The Blu-ray release (which also includes a standard DVD) has all those extras plus an alternate opening sequence, a collection of deleted scenes and an audio commentary by director Julie Anne Robinson and co-producer Jennifer Gibgot.

Real cinema lovers appreciate his dramatic turns, and action junkies go for the blockbusters. It’s not really clear who likes the comedies, but there must be fans somewhere because Fraser keeps cranking them out. The latest is “Furry Vengeance,” a movie that may entertain pre-teen children but will leave most everyone else wishing they’d found a better way to spend 90 minutes.

Fraser plays Dan Sanders, a real estate executive who has moved his family to an Oregon forest where his boss (Ken Jeong) plans to replace the trees with a subdivision. Dan’s wife, Tammy (Brooke Shields), and teen son, Tyler (Matt Prokop), aren’t happy about being uprooted from their Chicago home, but they’re sucking it up because it seems like a great career move for Dan. What nobody – including Dan – knows is that the animals in this particular forest are intent on preventing human development. They’re also insanely smart, so they spend most of the film torturing Dan in an effort to make him leave.

The comedy, such as it is, involves Dan getting sprayed in the face by skunks, rolled around in a porta-potty and repeatedly punched in the face by a raccoon. As physical comedy goes, it isn’t very compelling, but it is less offensive than a recurring bit designed to make viewers laugh at an elderly woman with dementia.

It’s difficult to explain why a fine actor like Fraser would choose to involve himself in a project like this, but it’s not really a surprise. Forgettable comedies make up a sizable portion of his eclectic resume.

DVD and Blu-ray extras include deleted scenes, a gag reel and an audio commentary with director Roger Kumble and members of the cast.

“Cougar Town” – The Complete First Season: Season two of this TV series about a 40-something (Courteney Cox) who finds herself back in the dating pool after a 17-year marriage is set to kick off next month. This release allows newbies and fans alike to gear up.

“Ugly Betty” – The Complete Fourth and Final Season: This ABC Television dramedy was focused on one young woman’s transition from “ugly duckling” to fashionista, and this boxed set wraps everything up. America Ferrera stars alongside Vanessa Williams, Eric Mabius, Tony Plana, and Ana Ortiz.

“Skellig – The Owl Man”: Based on an award-winning children’s book, this is the story of Michael (Bill Millner), a troubled boy who finds a friend in the mystical creature Skellig (Tim Roth). Available on DVD, Blu-ray and digital download.

“Temple Grandin”: HBO movie based on the extraordinary real-life woman who gave the film its title. Claire Daines plays Grandin, depicting her struggle to become a successful scientist despite being diagnosed with autism at a time when little was known about the disorder. After its TV release, the film was nominated for 15 Emmy awards, including outstanding made for television movie and outstanding lead actress (Danes).

“L’Enfance Nue” (Naked Childhood): The Criterion Collection is presenting a newly restored version of this 1968 French drama about a 10-year-old named Francois (Michel Terrazon) who is emotionally damaged by the foster care system. Directed by Maurice Pialat and presented in French with English subtitles.

“Black Orpheus”: French director Marcel Camus’ 1959 adaptation of the Greek legend of Orpheus and Eurydice won the Academy Award for best foreign language film and the Palme d’Or at the Cannes Film Festival. Camus set the classic story during Carnival in Rio de Janeiro, and the film is being presented by the Criterion Collection in Portuguese with English subtitles.

“One Tree Hill” – The Complete Seventh Season: Drama abounds on this CW series targeted at young adults. The popular characters Lucas and Peyton didn’t return for season seven, but viewers got two newbies in their place. This set includes all 22 episodes on five-discs.

Larry Blamire parodies: Shout Factory is releasing two parody films by Blamire. “The Lost Skeleton Returns” is a sequel to his 2004 sci-fi send-up “The Lost Skeleton of Cadavara,” and it stars most of the original cast. The second film, “Dark and Stormy Night,” is an homage to B-grade horror films.

Forrest Hartman is an independent film critic whose byline has appeared in some of the nation’s largest publications.  E-mail him at Forrest@ForrestHartman.com