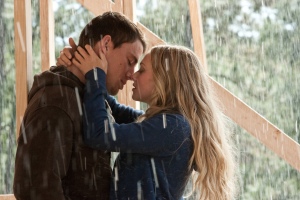 This week’s major home video releases are distinctly different in subject matter, but both were adapted from popular novels.

The Road
3½ stars (out of four)
Rated R for some violence, disturbing images and language
Sony
Available on: DVD and Blu-ray

Through the decades, filmmakers have presented us with many post-apocalyptic visions of Earth, but few have been as bleak and believable as the one depicted in “The Road.”

Based on the Pulitzer Prize-winning novel by Cormac McCarthy, the film follows a father (Viggo Mortensen) and his young son (Kodi Smit-McPhee) as they travel across America in hopes of making it to the Southern coast. During the journey, they battle the elements, starvation and ongoing natural disasters. But the biggest threat they face comes from other humans who are becoming increasingly desperate as food supplies dwindle.

The film features a brilliant supporting cast that includes Charlize Theron, Robert Duvall and Guy Pearce, but they are tapped only for small parts. That’s because 90 percent of the movie is focused on the ever-developing relationship between the desperate father and son at the heart of the plot. Because they are asked to carry the bulk of the film’s weight, there’s tremendous pressure on Mortensen and Smit-McPhee, and they bear the load admirably.

Mortensen is in fine form playing a man who has been pushed to the breaking point yet can’t afford to snap because of his obligation to his son, and Smit-McPhee – although not required to stretch as much as Mortensen – plays well across from the veteran actor.

It would be easy to turn a movie like “The Road” into a slow and unspeakably depressing slog, but director John Hillcoat does a wonderful job balancing exposition with intense scenes of action and suspense. The result is a movie that, bleak as it may be, demands attention and challenges viewers to think about what they would do if facing the end of the world.

DVD and Blu-ray extras include deleted scenes, a making-of featurette and an audio commentary by Hillcoat.

Dear John
2½ stars
Rated PG-13 for some sensuality and violence
Sony
Available on: DVD and Blu-ray

One has to give writer Nicholas Sparks credit. His stories are as sappy as a maple tree in March, but the public still eats them up. And why not? Everyone can use a little romance.

Unfortunately, the screen adaptation of his “Dear John” novel isn’t as consistent and heart wrenching as the best movies from his books: “The Notebook” and “A Walk to Remember.” Diehard Sparks fans will still find the troubled romance that carries all of his plots, but they’ll have to wade through so-so execution during the journey.

The story centers on John Tyree (Channing Tatum), a special forces soldier who runs into a beautiful college student named Savannah (Amanda Seyfried) while home on leave. John makes a gallant gesture, Savannah takes a look at his rock-hard abs and they fall in love. Alas, their romance is cut short when John’s leave ends. Still, he promises to return to Savannah in one year, as soon as his tour of duty ends. Then the Sept. 11 terrorist attacks occur and everyone in John’s unit re-enlists.

The big question is whether John’s and Savannah’s relationship can last through a continued separation, and Tatum and Seyfried do a reasonably good job creating characters the audience can invest in. That’s important because nothing is duller than a romance where nobody cares whether or not the leads find happiness.

In “Dear John,” Tatum, Seyfried and director Lasse Hallstrom create a romance that viewers can believe in, but their good work is seriously undermined by a serious second act lag. Also, although Tatum and Seyfried are likable most of the time, they have a tendency to push the most emotional scenes into the realm of melodrama.

DVD and Blu-ray extras include outtakes, deleted and alternate scenes, several making-of featurettes and an alternate ending that is superior to the one that the filmmakers chose.

“Dr. Horrible’s Sing-Along Blog”: Created during the Hollywood writer’s strike in 2008, this Internet miniseries developed by Joss Whedon (“Buffy the Vampire Slayer”) became a huge hit. The show is a science-fiction musical starring Neil Patrick Harris as the title character, a villain scheming to take over the world and get invited into the Evil League of Evil. Meanwhile, his arch nemesis Captain Hammer (Nathan Fillion) does everything possible to foil his plans.

“Stagecoach”: Director John Ford’s 1939 western gets a deluxe, two-disc treatment from the Criterion Collection. One disc is devoted to the film (with an audio commentary by Western expert Jim Kitses). The second disc is packed with extra features, including a 1917 silent film by Ford, a vintage interview with the director, a new interview with his grandson and a video appreciation of “Stagecoach” by director and Ford biographer Peter Bogdanovich. The movie stars John Wayne, Claire Trevor, John Carradine, and Thomas Mitchell.

“The Virginian – The Complete Season One”: Based on Owen Wister’s 1902 novel “The Virginian,” this television drama examined the lives and relationships of 19th century settlers coming West to claim land and fortune. The series aired from 1962-1971 and this 10-DVD set includes the first 30 episodes. James Drury, Lee J. Cobb, Doug McClure, Gary Clark and Roberta Shore star.

“True Blood – The Complete Second Season”: This release allows you to catch up with the happenings in the mysterious Southern town of Bon Temps before season three of the HBO vampire drama gets underway. During the second season, Sookie’s and Bill’s relationship grows closer, Tara falls under a spell and Jason joins an anti-vampire sect. The series is available on DVD, Blu-ray, and digital download.

“Flashpoint” – The Second Season: Police drama centered on the elite officers of the Strategic Response Unit. Their job is to use special tactics and intuition to diffuse dangerous situations. Enrico Colantoni, Amy Jo Johnson, Hugh Dillion and David Paetkau star.

“The Guild – Season 3”: Created by actress and avid video gamer Felicia Day, this online sitcom chronicles the on- and off-line lives of a guild known as “The Knights of Good.” In this season, the group encounters a rival organization,

“Tell Tale”: Psychological thriller based on Edgar Allen Poe’s “The Tell-Tale Heart.” Josh Lucas plays a heart transplant recipient who, haunted by the new organ beating inside him, attempts to discover how his donor died.