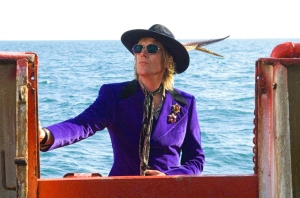 It’s a slow week for home video, as only one major theatrical release is making its way to the small screen.

Pirate Radio
2½ stars (out of four)
Rated R for language and some sexual content including brief nudity
Universal
Available on: DVD and Blu-ray

Writer-director Richard Curtis’ 2003 film, “Love Actually,” is such a gem that it’s only natural to plop “Pirate Radio” into a DVD or Blu-ray player with high expectations. Sadly, Curtis seems to be suffering from a sophomore slump.

Although consistently entertaining, “Pirate Radio” doesn’t have the panache or emotional depth of “Love Actually” despite an excellent setup. The story centers on a fictional rock ’n’ roll radio station broadcasting to the United Kingdom from a ship moored off the coast of England. Much of the fun lies in getting to know the wild personalities who make the station run. They include an American music man known as The Count (Philip Seymour Hoffman), the off-kilter station manager (Bill Nighy), a wildly popular British D.J. (Rhys Ifans) and a young man who was sent to live on the boat by his mother (Tom Sturridge).

The cast is first rate and everyone does a fine job capturing the rebellious spirit of rock music during the 1960s. Where the film fails is in building character relationships with the audience. There are lots of wild personalities, and they’re entertaining to watch, but Curtis tells his story in such broad strokes that none of them have much depth. That makes it hard to invest in their struggle when the British government decides it’s going to shut off-shore radio stations down.

DVD and Blu-ray extra features include deleted scenes and an audio commentary by Curtis and several of the other filmmakers.

“Tenderness”: Based on the novel by Robert Cormier, this is the story of a teenage killer (Jon Foster) who is released from prison even though the detective who helped bring him in (Russell Crowe) is convinced he’s still dangerous. Directed by John Polson.

“Tenure”: Comedy starring Luke Wilson as Charlie, a college professor hoping to be awarded tenure. Things get complicated, however, when he falls for a woman being considered as his replacement (Gretchen Mol).

“Tom and Jerry Tales – The Complete First Season”: Tom the cat and Jerry the mouse were called out of retirement for a host of new adventures in this animated series that ran from 2006 to 2008 on The CW. The first season includes 39 animated shorts that have been spread over two discs.

Jim Henson titles: Henson, creator of the Muppets, has two puppet-filled releases this week: “Animal Show with Stinky and Jake – Lions and Tigers and Bears” and “The Song of the Cloud Forest and Other Earth Stories.” The latter is designed to teach children about our planet, and the former is a talk show hosted by puppet animals.

“Plunder – The Crime of our Time”: In-depth look at how this country’s recent financial meltdown was born and developed. Filmmaker and former broadcast news producer Danny Schechter explores all angles of the crisis, interviewing bankers, economists, insider experts and journalists.

“Love the Beast”: In his first directorial effort, actor Eric Bana documents what happens when he and some friends try to prepare his first car – a Ford GT Falcon Coupe – for a grueling race. The film is accompanied by numerous special features, including a commentary by Bana and several shorts about the racecar project.