Video Verdict: ‘The Croods,’ ‘This Is the End,’ ‘The Frozen Ground’ 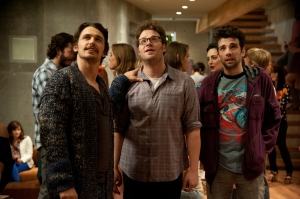 The comedy “This is the End” features a star-studded cast including, from left to right, James Franco, Seth Rogen and Jay Baruchel.

This week’s major home video releases include an apocalyptic comedy, a thriller starring Nicolas Cage and John Cusack and an animated film about cavemen.

In “The Croods,” the latest 3D feature from DreamWorks Animation, directors Kirk De Micco and Chris Sanders give viewers a glimpse of life on Earth some three million years ago. And, according to their vision, things were rough. For starters, there were a lot of dangerous creatures running around. Since advanced tools and weapons were yet to be developed, survivors had to spend much of their time hiding out.

Viewers learn this from Eep, the teen daughter in a cave family that has survived despite the harsh conditions. The family’s success is largely due to its patriarch, a powerful hunter named Grug. He doesn’t take any chances, and his motto is “Never not be afraid.”

Although Eep understands that her father’s “safety-first” attitude is well intentioned, she grows tired of spending all her time in a dank cave. So, one evening, she sneaks out and meets a young caveboy named Guy. To her amazement, Guy has a completely different lifestyle. He is clever, worldly and – unlike Eep’s family – always on the move. In fact, he believes the world that Eep knows is coming to an end.

Guy’s hunch is solid, and not long after their encounter, a giant earthquake rocks the area, destroying the cave that Grug worked so hard to fortify. Forced to find a new home, Eep, Grug and the rest of their family leave everything they know and march into the world. Along the way, they run into Guy, and he shows them all sorts of clever inventions, including fire. This thrills everybody except Grug who is reticent to give up his old-fashioned ideals.

De Micco and Sanders move the story smoothly, and the animation is crisp, sharp and colorful. The voice cast is also quite good. Nicolas Cage, Emma Stone, Ryan Reynolds, Catherine Keener, Clark Duke and Cloris Leachman all lend their talents to the project. Alas, the movie’s plot isn’t nearly as satisfying as the artists who stitched it together.

The story, which involves themes about risk and unchecked conservatism, is so typical that many moviegoers will know how it ends before the first act closes. It’s never fun to be that far ahead of a movie, and “The Croods” suffers because it isn’t surprising enough.

DVD and Blu-ray extras include behind-the-scenes features and deleted scenes.

This Is the End

“This Is the End” features a huge collection of youthful Hollywood players, but the apocalyptic comedy – written and directed by Seth Rogen and Evan Goldberg – isn’t nearly as funny as the talent would lead one to believe.

Along with co-writing and directing, Rogen spends a good deal of time on screen, portraying a fictionalized version of himself. In fact, the most interesting thing about the movie is that all the actors are offering absurdist versions of their public personas.

Rogen and Goldberg essentially ask what would happen if the apocalypse hit while a bunch of Hollywood pals were partying at James Franco’s house. The answer, at least according to the movie, is that everyone would freak out, treat each other badly and expect their celebrity status to merit an instant rescue. The apocalypse begins with the surprising deaths of a number of well-known entertainers. Somehow, Rogen, Franco, Jay Baruchel, Jonah Hill, Craig Robinson, Danny McBride and Emma Watson survive the initial destruction. With mayhem erupting all around and the prospects of rescue growing dim, they have to forge on. They also have to question the righteousness of their lives.

Rogen and Goldberg deserve credit for the clever idea, and everyone involved should be applauded for so willingly mocking themselves. The project would have been more successful, however, if their portrayals were less interested in shock value and more concerned with actual comedy. One big problem is that the fictionalized versions of most characters are painfully similar. Sure, Rogen’s delivery is different than Robinson’s and Franco’s, but what’s actually said makes one wonder if these guys are clones. Fortunately, the fictionalized versions of Hill and Baruchel are less homogenized. Unfortunately, they aren’t any funnier.

Since Rogen and Goldberg come from the Judd Apatow school of comedy, the movie’s attempted gags are unapologetically raucous and dirty. The film is also littered with gory, low-end special effects that include projectile vomit and a gross-out sequence about a severed head. The gratuitous use of foul language and blood are not, however, the problem. The trouble is that Rogen and Goldberg seem to believe that the vulgarity is funny without cleverness or insight.

The best thing about “This Is the End” is playing “spot-the-celebrity” in the movie’s early frames. Do this, and you’ll find everyone from Jason Segel to David Krumholtz. If all that talent were put to better use, the film might have been worth watching.

DVD and Blu-ray extras include media used to market the movie, an audio commentary with Rogen and Goldberg and a making-of short.

Despite an A-list cast led by Nicolas Cage and John Cusack, “The Frozen Ground” saw only a limited theatrical run. This reinforces the fact that quality and distribution are linked in only superficial ways.

“The Frozen Ground” isn’t innovative, but it is a well-paced and engaging thriller that has the added appeal of a truth-based narrative. The movie focuses on Alaska State Trooper Jack Halcombe (Cage) – a fictionalized version of real-life detective Glenn Flothe. It was Flothe who helped bring Alaskan serial killer Robert Hansen to justice, and “The Frozen Ground” tells the tail.

The action begins when prostitute Cindy Paulson (Vanessa Hudgens) miraculously escapes from Hansen (Cusack). Although local police ignore Cindy’s claims of abduction, Halcombe believes her story and is convinced that Hansen is responsible for additional murders. As the plot progresses, he tracks Hansen with Cindy’s help, trying desperately to find evidence that will incriminate the man.

Some thrillers make a point of hiding the identity of the bad guy, but writer-director Scott Walker doesn’t bother. He makes it clear from the start that Hansen is the killer. The suspense comes in watching Halcombe fight to prove it. There’s also enjoyment in watching Hansen slowly unravel as he feels Halcombe’s noose tighten about his throat.

“The Frozen Ground” does have flaws, including the straightforward manner in which Walker presents his narrative. There have been a lot of serial killer movies over the decades and this one does little to set itself apart. The movie also contains an unnecessary and poorly resolved subplot about Halcombe’s family life. This slows things without adding substantial depth.

Nevertheless, “The Frozen Ground” is worthwhile. Cage and Cusack are outstanding, and the supporting cast is loaded with recognizable faces, including 50 Cent, Kurt Fuller, Radha Mitchell and Dean Norris. The film may have had a limited theatrical run, but it’s considerably better than many pictures that earn a wide release.

DVD and Blu-ray extras include interviews with the cast and crew, deleted scenes and an audio commentary with Walker and producers Mark Ordesky and Jane Fleming.

“Beauty & the Beast” – The First Season: First 22 episodes of The CW drama loosely based on the beloved fairy tale. The plotting centers on Catherine “Cat” Chandler (Kristin Kreuk), a homicide detective who begins working with a man (Jay Ryan) who transforms into a powerful beast whenever he is angered. The series has been renewed for a second season, which will debut Oct. 7.

“Awkward” – Seasons 1 & 2: First 24 episodes of the MTV comedy about a teen girl (Ashley Rickards) struggling to fit in at high school. Things are particularly difficult because she is involved in a legitimate accident that is misinterpreted as a suicide attempt.

“Glee” – The Complete Fourth Season: “Glee” has been a phenomenon ever since it reached television. Sadly, the 22 episodes in this set will always be remembered as the last to feature recently deceased star Cory Monteith.

“How I Met Your Mother” – The Complete Season 8: CBS kicked off what will be the final season of this popular sitcom in late September. Fans who are mourning already, can ease their pain with this collection of recent episodes.

“The Little Mermaid” – Diamond Edition: Disney is rolling this Oscar-winning animated musical out of its vaults and into stores. Most notable is the fact that the 1989 feature – about a mermaid who falls in love with a human – is available on Blu-ray and as a digital download for the first time.

“100 Bloody Acres”: Australian horror-comedy about two brothers (Damon Herriman and Angus Sampson) who make a popular fertilizer out of the bodies of dead car-crash victims. When they run out of bodies, they hatch a sinister plan to meet their production needs. Directed by brothers Colin and Cameron Cairnes.

Gift sets from Star Vista Entertainment: Folks who are starting their Christmas shopping early may want to know that Star Vista, a division of Time Life, has some impressive DVD boxed sets being sold as online exclusives. They include “Mama’s Family” – The Complete Series, “China Beach” – The Complete Series” and “The Dean Martin Celebrity Roasts.” “Mama’s Family,” which ran during the 1980s, stars Vicki Lawrence as the ill-tempered matriarch of a quirky family. “China Beach” ran from 1988 to 1991, and it focuses on Americans working at an evacuation hospital during the Vietnam War. The Dean Martin release collects all 54 of his roasts, including shows targeting Bob Hope, Johnny Carson, Ronald Reagan and Muhammad Ali. All three titles are available exclusively at http://www.timelife.com.

“The Extraordinary Adventures of Adèle Blanc-Sec” Director’s Cut: In August, Shout Factory released the theatrical cut of this French film about an adventurous novelist living in Paris during the early 20th century. This release features writer-director Luc Besson’s preferred cut. Presented in French and English with English subtitles.

2 responses to “Video Verdict: ‘The Croods,’ ‘This Is the End,’ ‘The Frozen Ground’”