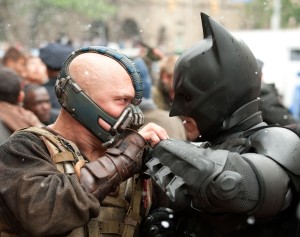 4 stars (out of four)
Rated PG-13 for intense sequences of violence and action, some sensuality and language
Warner Brothers
Available on: DVD, Blu-ray, digital download and on demand

In 2005, director Christopher Nolan (“Memento,” “Inception”) reinvented the Caped Crusader with the dark, brooding origin story “Batman Begins.” Fast forward seven years, and Nolan has placed an exclamation point on his work with a film reported to be his last in the Batman franchise.

Perhaps the greatest thing about “The Dark Knight Rises” is it doesn’t feel like a sequel. Rather, it plays as the thrilling and natural conclusion to an epic trilogy. The movie is set eight years after “The Dark Knight,” and Batman (Christian Bale) is in exile, having been wrongly accused of murder. In addition, the man behind the mask, Bruce Wayne, is living as an eccentric recluse, beaten and battered from his years fighting crime.

On the up side, Wayne’s beloved Gotham City is prospering, and crime is sharply down. Everything changes, however, when a well-funded terrorist named Bane (Tom Hardy) attacks the city, holding its citizens hostage with the threat of a nuclear detonation. Naturally, Wayne dons his cape and cowl to come to the rescue, but his fragile physical condition and the scope of the threat make this mission more difficult than any before.

Although “Dark Knight Rises” is nearly three hours long, it feels breezy thanks to Nolan’s pacing. As usual, he delivers an ideal mix of action, spectacle and emotional resonance, and that’s what sets this franchise apart from others in the genre. The “Dark Knight” movies may have been inspired by comic books, but they have the poignancy and weight of something greater. This movie, in particular, is a masterpiece because it skillfully concludes plot threads seeded in earlier chapters while maintaining its relevance as a stand-alone film. That means both newcomers and longtime fans can find rewards.

The appropriate cast members from the first two movies return, meaning we get fine outings from Michael Caine (as Wayne’s butler), Morgan Freeman (as a Wayne Enterprises executive) and Gary Oldman (as Police Commissioner Gordon). We also get a collection of new faces, including Joseph Gordon-Levitt as a young police officer, Marion Cotillard as a wealthy socialite and Anne Hathaway as Catwoman. Collectively, the group is fantastic.

Tommy Lee Jones and Meryl Streep are two of the finest actors working, so any collaboration between the two breeds optimism. Alas, “Hope Springs” is a slow-moving, dispassionate affair despite its emotional subject matter.

Streep stars as Kay, an aging housewife depressed by the fact that her marriage to Arnold (Jones) has lost all passion. Although they’ve been together 30 years, the two rarely talk, never touch and spend their nights in separate beds. Desperate, Kay books a week-long therapy session with a popular marriage counselor (Steve Carell). Arnold – who doesn’t believe there’s a problem – is reluctant to go, but he relents when it becomes clear that Kay can’t be dissuaded. “Hope Springs” then walks viewers through the couple’s counseling sessions, demonstrating just how isolated they have become.

The biggest problem with the film is that screenwriter Vanessa Taylor and director David Frankel spend too much time on the wrong things. For instance, viewers get a lengthy look at the couple’s therapy sessions, watching as Kay and Arnold squirm through numerous questions about their sex lives.

These bits aren’t exactly bad, but they don’t flesh out the characters or substantially further the plotting. In fact, by the time the credits roll, the root of Arnold’s and Kay’s problems is still unclear. One could say this gives the movie a sense of realism, but it also makes it boring.

A lot of things happen in “Hope Springs,” but only a handful of them offer real insight into the character’s lives. Because of that, it’s hard to care what happens to them, even if they are played by Meryl Streep and Tommy Lee Jones.

DVD and Blu-ray extras include a gallery of alternate takes, a featurette about Jones and Streep, a gag reel and a commentary by Frankel.

The Odd Life of Timothy Green

With “The Odd Life of Timothy Green,” director Peter Hedges has crafted a pleasant drama that is ideal for family viewing. The movie centers on Jim and Cindy Green (Joel Edgerton and Jennifer Garner), a young couple desperate to have a child.

After learning they are unable to conceive, they sit down and imagine all the traits their offspring might have possessed had circumstances been different. The next day, they are shocked and delighted when a youngster named Timothy (C.J. Adams) shows up at their home, claiming he sprouted from their garden. As crazy as the story is, it’s validated by the fact that he has leaves attached to his ankles.

Once the Greens get over their shock, they take Timothy in and agree to raise him as their child. Of course, there are hiccups along the way, as Jim and Cindy face the dilemmas that come with raising another human being.

“The Odd Life of Timothy Green” is a sweet story about what it means to be a parent, and its messages are both valuable and well fleshed out. As appealing as the movie is, there are faults, the worst being that Hedges spends so much time foreshadowing his ending that it doesn’t carry the emotional weight that it could have.

It isn’t giving away too much to say that “Timothy Green” is a tearjerker, a fact that has the potential to both frustrate and gratify fans. The project would have been stronger, however, if Hedges was just a tad better at jerking those tears.

DVD and Blu-ray extras include deleted scenes and a music video by Glen Hansard.

Beasts of the Southern Wild

“Beasts of the Southern Wild” received multiple honors at the 2012 Cannes Film Festival, and it is entering awards season with substantial Oscar buzz. This is merited because the unique drama effectively blends moments of both gritty realism and extreme fantasy into a fascinating and compelling tale.

The movie is set in a Louisiana bayou known at the Bathtub, and it focuses on a six-year-old girl named Hushpuppy (Quvenzhané Wallis). She and her father, Wink (Dwight Henry), live in rundown trailers on a chunk of land that is perennially in danger of flooding. In school, Hushpuppy receives factually challenged lessons on both global warming and the habits of massive prehistoric creatures known as aurochs.

As a storm threatens to flood Hushpuppy’s Bathtub home, viewers are treated to visions of the polar ice caps melting and of frozen aurochs being released from a long slumber. In the meantime, Hushpuppy realizes that her father is battling a serious illness. Using Hushpuppy as his narrator, director Benh Zeitlin puts viewers inside the character’s young mind, delivering a moving portrait of childhood under difficult circumstances.

Although she has no prior acting credits, Wallis is a revelation in the lead role, and there is speculation that she could receive a best actress Oscar nomination for her work in the film. Although she may not possess the chops of better-trained actors, there is no denying the emotional realism she brings to the role and she, along with Henry, are the engines that drive the film.

As entrancing as the movie is as a whole, there are troubling moments. Zeitlin allows his story to play out in dreamlike fashion, leaving viewers with a handful of strange edits that do more to confuse things than move the narrative forward.

Still, anyone willing to look at the picture as a piece of contemporary art rather than a traditional linear story form, should enjoy deciphering Zeitlin’s complex and symbol-laden spectacle.

DVD and Blu-ray extras include a making-of feature.

“Silent Night”: Fresh on the heels of a limited theatrical release, this remake of “Silent Night, Deadly Night” (1984) is out on video. The plot centers on a sheriff (Malcolm McDowell) and his deputy (Jaime King) who are trying to capture a serial killer dressed as Santa Claus. Directed by Steven C. Miller.

“Butter”: Political satire about a woman (Jennifer Garner) who will do anything to win her town’s annual butter-sculpting contest. Garner’s co-stars include Ty Burrell, Olivia Wilde, Rob Corddry, Ashley Greene, Alicia Silverstone and Hugh Jackman. Directed by Jim Field Smith (“She’s Out of My League”).

“Finding Nemo”: Pixar’s wonderful animated film about a nervous clownfish that goes in search of his missing son is reaching Blu-ray for the first time. The movie is also available on Blu-ray 3D, meaning folks with high-end home theaters can enjoy freshly added 3D effects.

“World Without End”: This set collects every episode of the TV miniseries based on Ken Follett’s like-titled novel. The story, which is a sequel to “Pillars of the Earth,” relates the exploits of characters in the English town of Kingsbridge at the beginning of the Hundred Years’ War. Cynthia Nixon, Miranda Richardson, Ben Chaplin and Peter Firth star.

“Titanic – Blood & Steel”: All 12 parts of the television miniseries about the building of the ill-fated RMS Titanic. Series stars include Kevin Zegers, Derek Jacobi, Neve Campbell and Chris Noth.

“Eastbound & Down” – The Complete Third Season: Final eight episodes of HBO’s comedy about former professional baseball player Kenny Powers (Danny McBride). In season three, Kenny attempts to resurrect his career by signing on as a closer for the Myrtle Beach Mermen.

“Purple Noon”: French director Rene Clement’s 1960 film adaptation of the Patricia Highsmith novel “The Talented Mr. Ripley.” The movie is centered on an amoral young man (Alain Delon) who kills a wealthy acquaintance and assumes his identity. Presented in French, Italian and English with English subtitles.

“Francis Ford Coppola 5-Film Collection”: Several of Coppola’s best-known pictures are packaged in this gift-worthy set. The included titles are: “Apocalypse Now,” “Apocalypse Now Redux,” “The Conversation,” “Tetro” and “One From the Heart.”

“Catch Me if You Can”: Blu-ray debut of director Steven Spielberg’s drama about a smooth-talking conman (Leonardo DiCaprio) who is a master of false identities. Tom Hanks, Christopher Walken and Martin Sheen also star.

Chris Lilley comedy shows: HBO is releasing two short-run TV series created by Australian comedian Chris Lilley. The first is “We Can Be Heroes: Finding the Australian of the Year,” a mockumentary about five characters competing for their country’s most-coveted honor. The second is “Angry Boys,” a show that looks at issues faced by modern young men.