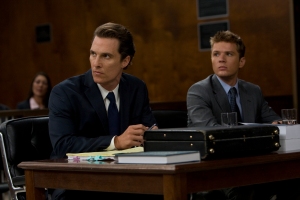 Matthew McConaughey, left, plays attorney Mick Haller and Ryan Phillippe plays one of his troublesome clients in “The Lincoln Lawyer.”

It’s an outstanding week on home video, as a number of memorable theatrical releases are transitioning to the small screen. These include an animated movie with the voice talents of Johnny Depp and Isla Fisher, a broad comedy featuring Russell Brand and a thriller starring Matthew McConaughey.

3½ stars (out of four)
Rated R for some violence, sexual content and language
Lionsgate
Available on: DVD, Blu-ray, digital download and on demand

When working with good material, Matthew McConaughey is one of the most likable actors in Hollywood, and “The Lincoln Lawyer” shows off his full potential.

An adaptation of Michael Connelly’s crime novel, the film pulls McConaughey away from the romantic comedies that represent the worst of his filmography and allow him to create a character that is not only charismatic, but quirky and intelligent. We’re talking about Mick Haller, a Los Angeles defense attorney who works exclusively from the back seat of his Lincoln Town Car.

Typically, Haller handles low-profile cases, but when a wealthy realtor named Louis Roulet (Ryan Phillippe) hires him, it looks as though he’s hit the gravy train. Louis is accused of battering a prostitute, and it seems as though he was set up. But as Haller and his private investigator (William H. Macy) look into his case, the young man’s background becomes increasingly suspicious.

McConaughey’s excellent lead performance is aptly supported by the rest of the cast, with Phillippe and Macy turning in particularly good work. The film also has a number of solid actors in relatively small roles. Marisa Tomei plays Haller’s ex-wife, Josh Lucas portrays a rival attorney, John Leguizamo plays a fast-talking bail bondsman and Michael Pena portrays one of Haller’s former clients. All are great.

As with any good thriller, “The Lincoln Lawyer” has a number of twists and turns, and director Brad Furman slides into each with ease. He also maintains the film’s momentum throughout its two-hour run, building increasing tension until the story finally comes to an exciting and satisfying close.

DVD and Blu-ray extras include deleted scenes and a collection of making-of featurettes.

The quality of director Gore Verbinski’s movies has varied over the years, but there’s no critiquing his versatility. He’s done slapstick comedy (“Mousehunt”), pure horror (“The Ring”) and blockbuster action (the first three “Pirates of the Caribbean” films), and with the exception of his last two “Pirates” films, he’s handled every genre with skill.

It should come as no surprise, then, that Verbinski has wandered into animation, both directing and developing the story for “Rango,” an homage to old-school spaghetti Westerns. The clever film focuses on a pet chameleon who literally falls off a truck in the middle of the Nevada desert. After a few moments of panic, a wise armadillo sends the young lizard – who takes on the name Rango – in the direction of a nearby town named Dirt.

Rango, dressed in a Hawaiian shirt and having lived the life of a house pet, doesn’t fit in. He is, however, smart and a pretty good actor. So, he does what any frightened reptile would. He pretends to be a fearless gunslinger and convinces the townspeople to make him their sheriff.

“Rango” then becomes a two-pronged story. On one hand, it’s a meditation on identity, with Rango finding himself further and further immersed in the lie that has become his life. On the other hand, it’s a traditional thriller. You see, Dirt is on its deathbed because the water that has long given the town life is drying up, and nobody knows why.

The visuals are gorgeous, with Verbinski delivering lots of cleverly rendered creatures, all set against beautiful old West backdrops. The feature also gets tons of mileage from its outstanding voice cast. Rango is handled by the always-great Johnny Depp and he’s joined by Alfred Molina, Isla Fisher, Ray Winstone, Bill Nighy and Ned Beatty. Together with Verbinski, they make a formidable group.

DVD and Blu-ray extras include an extended version of the film, deleted scenes, a piece on the real creatures that inspired characters in “Rango,” and a filmmakers’ commentary.

What happens when you pair the creative forces behind “Paranormal Activity” and “Saw”? You get “Insidious,” an innovative horror film that is frightening, suspenseful and every bit as entertaining as the previously mentioned works.

Written by Leigh Whannell and directed by James Wan, the men who created “Saw,” “Insidious” is not only astonishingly good, it’s noteworthy for the restraint the filmmakers showed in bringing it to the screen with a PG-13 rating. It’s tempting to attribute that moderation to producers Jason Blum, Steven Schneider and Oren Peli, all of whom had a hand in “Paranormal Activity.” That low-budget venture was a reminder that the most frightening horror films avoid buckets of blood and hit audiences at the psychological level … just like “Insidious.”

The plot centers on Josh and Renai Lambert (Patrick Wilson and Rose Byrne), a young couple whose lives come undone when their oldest child, Dalton (Ty Simkins), sinks into an unexplained coma. As they struggle to deal with the tragedy, Josh and Renai are plagued by other eerie happenings in their home. These events range from doors opening on their own to shadowy figures darting about, and they eventually convince the Lamberts to turn to Elise Rainier (Lin Shaye), a woman who claims an understanding of the supernatural.

Countless movies have focused on the haunting of a house or a family, but Whannell’s screenplay contains enough fresh twists to separate it from all predecessors. In fact, the movie’s take is so inventive that it’s easy to imagine other filmmakers copying it for years to come.

In 1981, Dudley Moore delivered “Arthur,” the story of a freewheeling, millionaire playboy faced with an ultimatum: Either marry the woman his family has selected or lose his vast fortune. Fast forward 30 years and Russell Brand is telling the same tale.

In Brand’s reading of Arthur, the character is a self-centered, alcoholic who lives with his nursemaid (Helen Mirren) and throws money around like he has a direct line to Fort Knox. This is somewhat understandable because his resources are virtually inexhaustible. Or at least they are until his mother (Geraldine James) tires of his shenanigans and insists that he marry one of her employees, an ambitious executive named Susan Johnson (Jennifer Garner).

Arthur protests, but that hardly matters. Unable to land a real job and convinced he can’t live without millions, he is forced to agree to the union. Then, he promptly meets the girl of his dreams, a beautiful writer-artist named Naomi (Greta Gerwig).

Suddenly, Arthur is in a tight spot. Does he marry Susan and keep his money? Or follow his heart and live in poverty? It’s a terrific setup, but Brand and company fail to fully capitalize on the potential.

One of the problems is that Brand’s Arthur doesn’t possess enough subtleties. In order for audiences to gain an emotional connection with the character, they need to see his softer side, but this only comes through in flashes. To be fair, Brand attempts nuance, but director Jason Winer draws the focus away from this with an overreliance on broad comedy.

Brand’s natural charisma allows the film to skate by as passable entertainment, but it doesn’t live up to its promise. In that respect, it’s a lot like Arthur himself.

Extras on the DVD-only release are limited to additional scenes. The Blu-ray release, which also includes a DVD, has those plus a gag reel and an assortment of deleted bits.

“Miral”: Drama about a Palestinian girl (Frieda Pinto) growing up in the 1970s amid the Arab-Israeli conflict. Directed by acclaimed filmmaker Julian Schnabel (“The Diving Bell and the Butterfly,” “Before Night Falls”).

“Robot Chicken – Star Wars III”: Producers Seth Green and Matthew Senreich have parodied many things in their stop-motion animated series “Robot Chicken,” but “Star Wars” is a favorite target. This release delivers their latest (and supposedly final) spoof of the much-loved science-fiction adventure.

“Entourage” – The Complete Seventh Season: Season eight (debuting July 24) will be the last for the HBO dramedy “Entourage.” This 10-episode collection leads into those final episodes with more adventures from actor Vincent Chase (Adrian Grenier) and his childhood pals.

“Damages” – The Complete Third Season: Since this legal drama only airs on DirecTV’s Audience Network, home video releases open it to a new audience. The action centers on the players at a New York City law firm, and the excellent cast includes Glenn Close, Tate Donovan, Rose Byrne, Lily Tomlin and Martin Short.

“ER” – The Final Season: After a remarkable 15-season run, the medical drama “ER” left the air in April 2009. This five-DVD set brings the final episodes to video, allowing hard-core fans to complete their libraries.

“ThunderCats” – The Original Series – Season 1, Part 1: First 12 episodes of the 1980s cartoon series about cat-like aliens battling enemy forces that are determined to destroy them. Cartoon Network is launching a remake of the series at the end of this month, so this release is hitting stores at a perfect time.

“Battle Beyond the Stars”: Shout! Factory is releasing this 1980 science-fiction effort as part of its Roger Corman’s Cult Classics collection. The movie focuses on seven interplanetary mercenaries who gather to battle an evil overlord. Richard Thomas, Robert Vaughn, John Saxon and George Peppard star. The movie is also noteworthy because of some of the behind-the-scenes players. A young James Cameron (“Avatar,” “Titanic”) was the art director, John Sayles (“Passion Fish”) was the screenwriter and composer James Horner (“Titanic”) handled the score.

– Forrest Hartman is an independent film critic whose byline has appeared in some of the nation’s largest publications. E-mail him at forrest@forresthartman.com