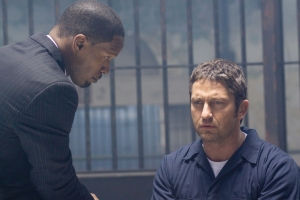 It’s a slow week for home video, as a revenge flick starring Gerard Butler and Jamie Foxx is the only big-budget movie making its way into rental stores.

Law Abiding Citizen
3 stars (out of four)
Rated R for strong bloody brutal violence and torture, a scene of rape and pervasive language
Anchor Bay
Available on: DVD and Blu-ray

I don’t generally rate movies based on their political leanings, but it’s impossible to write about “Law Abiding Citizen” without acknowledging that its filmmakers are arguing for a complete disassembly of the U.S. justice system. I say this because the most openly sympathetic character – at least through the first act – is a man bent on destroying the law as we know it.

In many ways, it’s hard to blame Clyde Shelton (Gerard Butler) for his rampage. He’s an everyday guy who wants nothing more than a happy life with his wife and daughter when two thugs eliminate that possibility by invading his home, seriously injuring him and killing his family.

At first, Clyde trusts that the police and other public officials will put the bad guys away, but he goes ballistic when a successful prosecutor named Nick Rice (Jamie Foxx) gives one of the killers a sweetheart deal for testifying against the other. Clyde isn’t the sort of guy to make deals with murderers, and he makes that clear when he launches a one-man war against the men who killed his family and the legal system.

“Law Abiding Citizen” is far fetched in places, but there’s no denying its entertainment value. Director F. Gary Gray has created a film that moves quickly, takes nice twists along the way and offers the perfect sparring ground for Butler and Foxx. Both are terrific actors, and they do a great job in each and every scene.

The problem with “Citizen” is that it seems to argue that the U.S. justice system should take a “guilty before proven innocent” stance. That’s a position that sounds pretty good until the first innocent man dies on death row … or until it’s your brother or sister who goes to jail without a proper trial. Few would argue that our current system is flawless, but the one that Clyde Shelton is gunning for would be a whole lot worse.

Does that mean “Law Abiding Citizen” is a complete loss? No. It’s an awful lot of fun, and it’s fine to revel in the giddy lawlessness, as long as we remember that it’s just a movie and not a manifesto that we should be actively promoting.

DVD and Blu-ray extras include several making-of features and an audio commentary by producers Lucas Foster and Alan Siegel.

Rags to riches stories are a staple of the feel-good genre, but the tale laid out in “Coco Before Chanel” is a step shy of inspirational, in part because the film focuses on all the wrong parts of its title character’s life. The movie – presented in French with English subtitles – tells of Coco Chanel’s (Audrey Tautou) transformation from orphan to world-renowned French fashion designer.

If we’re to believe the movie, her ability to craft fine garments played less of a role in her success than a knack for ruthlessly sleeping her way to the top. Perhaps the portrayal is fair (I’m no Chanel scholar), but the movie’s obsession with her love life takes the focus off what I consider the most interesting and accessible part of her legacy: her style. Sure, there are sequences where Coco is shown making nifty hats, but these are mere flashes when compared to the scenes where she’s insinuating herself into the lives of wealthy men, the two in the film being Etienne Balsan (Benoit Poelvoorde) and Arthur “Boy” Capel (Alessandro Nivola).

The movie, and writer-director Anne Fontaine, get points for style, as the art direction, costumes and cinematography are beautiful. Unfortunately, the storytelling doesn’t live up to the high visual standards. What’s more, Tautou’s performance is surprisingly flat. Typically, she’s a reliable actress, but her performance here is one dimensional. As portrayed in the film, Coco is either on the prowl or angry because she has been slighted in some small way. Rarely do we see her thrilling at the creation of some new garment. And that’s the problem. Coco Chanel had a remarkable impact on the fashion industry, and that doesn’t happen without passion and drive. Sadly, we don’t see either of those in this film.

DVD and Blu-ray extras include making-of and behind-the-scenes features and an audio commentary by Fontaine.

“Halo – Legends”: Seven animated stories that delve deeply into the Halo universe and feature characters made popular by the videogame franchise. The movie is available on DVD and Blu-ray, and extra features include an audio commentary by directors Frank O’Connor and Joseph Chou.

Criterion Collection Releases: The always-excellent Criterion Collection is rolling out three new titles this week. They are: “Hunger,” the story of Bobby Sands, an Irish Republican Army member who goes on a hunger strike in protest of the British government; “Revanche,” a thriller about an ex-con who falls in love with a prostitute; and “Lola Montes,” a drama based loosely on the life of showgirl and cabaret dancer Elizabeth Rosanna Gilbert.

“Cabin Fever” and “Cabin Fever 2 – Spring Fever”: Lionsgate is re-releasing the 2002 horror film “Cabin Fever” in concert with its new direct-to-DVD sequel. The new movie focuses on what happens when the deadly virus from the first film reaches a nearby high school.

“Scooby Doo! Abracadabra-Doo”: New feature-length, animated film starring the Mystery Inc. gang. There are strange happenings afoot at the Whirlen Merlin Magic Academy, and Scooby and company are just the sleuths to get things straightened out.

“The Shooter Series – Volume 2 – Director F. Gary Gray”: This collection of music videos helmed by F. Gary Gray makes a nice companion piece to “Law Abiding Citizen.” Songs include “Show Me What You Got” by Jay-Z, “Keep Their Heads Ringin’” by Dr. Dre, “Waterfalls” by TLC, “I Ain’t Going Out Like That” by Cypress Hill and “Ms. Jackson” by Outkast.

“Lincoln Heights – The Complete First Season”: ABC family drama about police officer Eddie Sutton, who moves his family from the suburbs to inner-city Los Angeles. All of the first season episodes are presented on four discs.