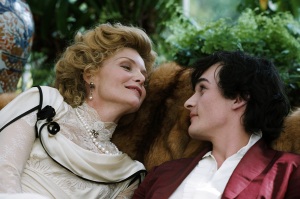 This week’s DVD releases include an intimate drama starring Michelle Pfeiffer, a charming re-release of a 2001 melodrama by director Mira Nair and a big-budget blockbuster about sentient robots.

Cheri
2 1/2 stars (out of four)
Rated R for some sexual content and brief drug use
Miramax
Available on: DVD

As captivating as Michelle Pfeiffer is playing an aging, pre-World War I courtesan, “Cheri” is never more than a minor curiosity. In fact, were it not for Pfeiffer, it could have been downright dull.

The story is centered on Lea de Lonval (Pfeiffer), a famous Parisian call girl who realizes it’s time to retire. Before she does, however, she falls into a relationship with another courtesan’s handsome, young son (Rupert Friend). Although Lea expects their relationship to end quickly, she and the young man, whose nickname is Cheri, remain together for years. Their comfortable relationship is ended when Cheri’s mother (Kathy Bates) arranges a marriage for him. With both Cheri and Lea two proud to admit that they love one another, they go their separate ways only to suffer in private.

Director Stephen Frears does a reasonable job setting the story up, but he is not very successful at establishing the depth of the relationship between Lea and Cheri. As viewers, we understand that they are supposed to love each other, but only because Pfeiffer and Friend spend much of the picture sulking. When they are actually together, their relationship seems oddly formal. In part, this is because the film is a period social drama centered on characters who would be unlikely to wear their hearts on their sleeves. Still, viewers must believe that these two have a deep love, and that never comes across on screen.

In fact, as vibrant as Pfeiffer’s reading of Lea is, I couldn’t help wondering why she would have the slightest interest in a man like Cheri. Friend plays him as a world-class cad: arrogant, self-absorbed and incessantly whiney. It’s a reasonable reading of the character, I suppose, but not one that predisposes viewers to root for his happiness … or develop an emotional stake in the movie.

DVD extras are limited to deleted scenes and a short making-of feature.

When the Criterion Collection releases a movie on DVD, its product almost always becomes the copy of choice, even if the film is already available elsewhere, as “Monsoon Wedding” is. That’s because Criterion not only takes great care with film transfers, the company understands that special features actually need to be special.

Of course, the big draw of this set will be “Monsoon,” a charming 2001 melodrama centered on an Indian family’s preparations for an arranged marriage. The film is set in modern-day Delhi and the bride, a beautiful young woman named Aditi (Vasundhara Das), has decided to leave her married boyfriend for the match even though she’s never met her husband-to-be.

The audience watches as Aditi’s family, led by her gruff father (Naseeruddin Shah), prepare for the nuptials and as various characters struggle with issues of love, separation and family. Although many things happen in “Monsoon,” the movie is more a slice of life than anything else, and that’s OK. The characters in the film are so well-drawn that viewers come away not only with a fascinating view of modern-day India, but feeling as though they are part of Aditi’s family.

“Monsoon Wedding” is presented in English and a variety of Indian dialects with subtitles where appropriate.

“Transformers — Revenge of the Fallen”: This big-budget Michael Bay action film has the highest-profile of all this week’s releases but a review copy was unavailable at press time. A sequel to Bay’s 2007 movie, “Transformers,” “Revenge of the Fallen” again focuses on powerful and intelligent robots that have the ability to blend into our world by transforming into everyday machinery like cars and planes. In this episode, evil robots, known as Decepticons, are threatening humankind, while their enemies, the Autobots, try to protect us. The robots are the real stars of the film, but the human cast includes Shia LaBeouf, Megan Fox, Josh Duhamel and Tyrese Gibson. Watch for a full review of the film on this site on Wednesday.

“Numbers” — The Fifth Season: Season six of this popular drama is already underway on TV, so this DVD set gives fans the chance to catch up on missed episodes. For newcomers, the show focuses on FBI agents who collaborate with a mathematical genius to help bring criminals to justice. The cast includes Rob Morrow, David Krumholtz, Sophina Brown and Judd Hirsch.

“The L Word” — The Complete Final Season: The lesbian drama comes to a climatic end, as the final eight episodes take mysterious twists and turns. Of course, everything is centered on one burning question: Who killed Jenny?

“Hawaii Five-O” — The Seventh Season: This fictional Hawaiian police drama ran for more than a decade and is syndicated in countries all over the world. Jack Lord stars as detective Steve McGarrett who battles everyone from international secret agents to common criminals who are causing problems on his island.

“Willie Nelson and Wynton Marsalis Play the Music of Ray Charles”: This Jazz at Lincoln Center concert was presented in honor of the legendary Ray Charles and recorded in high-definition. Nelson and Marsalis are shown in a 15-song set including the hits “Hallelujah I Love Her So,” “Hit the Road Jack” and “Unchain My Heart.” Songstress Norah Jones makes a guest appearance. Available on DVD and Blu-ray.

“Top Chef: New York” — The Complete Season 5: Reality series where 17 chefs compete to be crowned No. 1. This 4-disc set is packed with delicious extras including never-before-aired Stew Room footage, extended interviews, cooking demonstrations, a mini cookbook and a game demo.