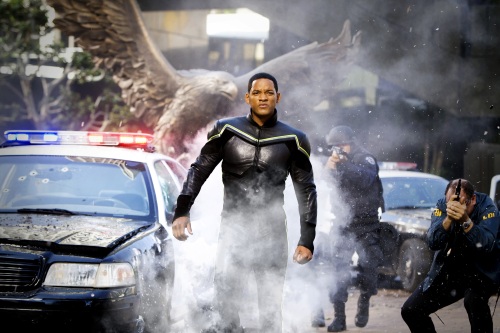 Will Smith is the title character in "Hancock."

Two family films, a science-fiction comedy and the story of an unusual superhero lead this week’s DVD crop. Unfortunately, the quality of the movies is as varied as their subject matter.

Hancock
3 stars (out of four)
Available in rated and unrated versions. The rated edition received a PG-13 for some intense sequences of sci-fi action and violence, and language
Sony Pictures
Available Tuesday on DVD and Blu-ray

Director Peter Berg’s twist on superhero mythology is imperfect but entertaining. Will Smith stars as Hancock, a ne’er do well hero with the powers of a superman but the self control of a kindergartener.

That means he jets around Los Angeles blitzed out of his mind performing good deeds that are generally offset by massive property damage. But when Hancock prevents a good-hearted public relations man named Ray Embrey (Jason Bateman) from becoming the hood ornament on a train, he gets the chance to reinvent himself.

Ray knows all Hancock needs is a little self control and an image consultant, so he begins to work with the misguided superhero, and the results are impressive.

“Hancock” is fun and lighthearted through it’s first two thirds. Then it takes a jarringly serious turn. That may leave viewers scratching their heads, but those who make the transition will be rewarded with an endearing film that takes superhero flicks in a thoughtful new direction.

The movie is available on a variety of DVD editions, including some with an unrated cut. Extra features vary.

Like “The Santa Clause,” “Jingle All the Way” and “Scrooged,” “Fred Claus” is predictable and lightweight, but it’s still an enjoyable holiday comedy.

Vince Vaughn and Paul Giamatti star as Fred and Nick, brothers suffering from the ultimate in sibling rivalry. Nick has always cast a large shadow since he’s none other than Santa Claus. Fred resents this, but he isn’t opposed to asking Nick for a hefty handout during the days leading to Christmas.

Because Nick can’t say no, he agrees to give Fred $50,000, but only if Fred helps with the holiday preparations. Alas, Fred is ill-prepared to handle things as important as Santa’s naughty and nice list.

Complicating things further is the fact that Nick is facing a possible North Pole shutdown at the hands of an overzealous efficiency expert (Kevin Spacey). Will Nick and Fred reconcile and tap into some brotherly love for the holidays? If you know Christmas films, you know the answer, but Giamatti and Vaughn are such winning performers that “Fred Claus” is still a hoot to watch.

DVD extras include more than 25 minutes of additional scenes and a commentary by director David Dobkin.

As animated movies go, “Space Chimps” is second-tier, but it’s a solid addition to that lesser tier.

The picture centers on a group of chimps who are sent into space after a scientific probe is sucked into a wormhole and transmits data indicating there could be life on other planets. Two of the simian astronauts — Luna and Titan — are thrilled by the opportunity, but the third crew member is an unwilling participant named Ham III. Grandson to the most famous chimp in aeronautics history, Ham is added to the team as a public relations stunt, but he would rather go back to his day job at the circus.

Nevertheless, Ham is saddled up and shot into space where he, Titan and Luna find themselves on a strange alien world filled with adventure and danger. “Space Chimps” allows viewers to listen in on conversations between humans, chimps and aliens, even though the humans and chimps can’t communicate with one another. The animation isn’t astounding, but it’s good enough, particularly for the young children who make up the target audience.

The most endearing thing about “Space Chimps” is its sweetness. The film received a G rating, which is rare these days, and it’s tame enough for even toddlers to watch.

Eddie Murphy is a sucker for any movie that allows him to ham it up in multiple roles, even when the script is awful. That’s too bad because Murphy is a fine performer, as was evidenced by his standout turn in 2006’s “Dreamgirls.” But as long as he insists on making movies like “Meet Dave,” his legacy will be tarnished.

In “Dave,” Murphy plays the captain of an alien spaceship that travels to Earth with the intent of sucking all our oceans dry. He also plays the spaceship. Yes. You read that right. Murphy is a member of a tiny, alien race, and in order to blend in on earth they build a human-sized ship that looks real … as long as it isn’t moving or talking.

“Meet Dave” is presumably a comedy, but there’s hardly a funny moment to be found. What’s more, Murphy’s performance is surprisingly flat.

DVD extras are limited to trailers for other films and a brief feature in which the space alien characters talk about their jobs and feelings.

“24 — Redemption”: Extended cut of the television movie that fills the gap between the sixth and seventh seasons of the TV series “24.” The movie was shown for the first time Sunday, so the DVD is an almost immediate follow-up.

The Ron Howard Spotlight Collection: Four of Ron Howard’s finest directorial efforts in a single set. Each feature — “A Beautiful Mind,” “Apollo 13,” “Cinderella Man” and “Backdraft” — has two discs devoted to it, so there are plenty of extras to supplement the films.

“Chungking Express”: Director Wong Kar-wai’s most famous movie tells the stories of two police officers coping with the breakup of their relationships. Originally released in 1994, the Chinese drama features a newly restored digital transfer courtesy of the Criterion Collection.

“The Spy Who Came in From the Cold”: Another classic remastered for the Criterion Collection. The 1965 drama stars Richard Burton as Alec Leamas, a British secret agent who falls for a communist librarian during what he hopes will be his final assignment. The movie is based on the novel by John le Carre, and it was directed by Martin Ritt.

“Beverly Hills 90210” — The Sixth Season: The television soap opera about teens living in Beverly Hills, Calif., ran for 10 seasons. The sixth season is noteworthy because it features Luke Perry’s short-term exit from the show. His character, Dylan McKay, leaves town, only to return during season nine.

“Gomer Pyle, U.S.M.C.” — The Final Season: When Gomer Pyle (Jim Nabors) finished his stint on “The Andy Griffith Show,” the character joined the military and carried his own series for five seasons. This four-disc set wraps everything up.

“Sounder”: New release of the 1972 film about a family of black sharecroppers who endure hard times when the patriarch is imprisoned. Paul Winfield and Cicely Tyson received Oscar nominations for their starring performances, and the film received nods for best picture and best adapted screenplay as well.

“Misty”: Popular, 1961 family film about two children who capture an elusive wild horse on an island off the Virginia coast.