Video Verdict: New DVDs for May 6 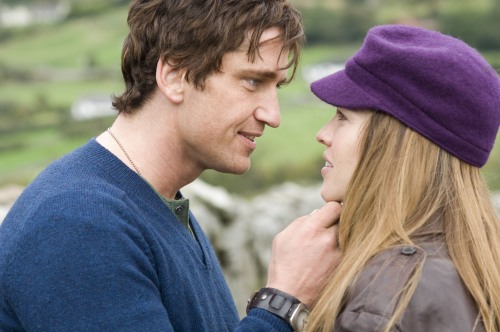 Gerard Butler and Hilary Swank in "P.S. I Love You."

Not much good news to report on the home video front this week. Although we have a healthy crop of mainstream titles, none of them are particularly inventive or engaging.

P.S. I Love You
2½ stars (out of four)
Rated PG-13 for sexual references and brief nudity.
Warner Home Video
Available on: DVD, Blu-ray

You know a film has troubles when its most likable character kicks the bucket in the first act. So, when Gerry Kennedy (Gerard Butler) dies in “P.S. I Love You,” the warning sirens start screeching.

Butler is a charming actor, and it’s fun to watch him on screen, but “P.S.” is built around the fact that Gerry must die. The premise is such: Before exiting, Gerry sets up an elaborate plan allowing his wife, Holly (Hilary Swank), to receive notes from him after he’s gone. It’s a sweet concept, and sentimental viewers will find themselves wiping away a few tears as Holly receives one letter after another from her dead husband.

Unfortunately, there’s no getting away from the schmaltz that accompanies this story and, even worse, there are a number of sketchy performances. Swank is solid, although not at her best, but Nellie McKay is unbelievably bad as her sister, Ciara. Add to this an uneven performance from Harry Connick Jr. – as a befuddled bartender – and even the great Kathy Bates can’t turn things around.

Too bad because the movie has romantic moments and its heart is certainly in the right place.

DVD extras include a short about adapting the Cecelia Ahern novel into this film, a collection of deleted scenes and a James Blunt music video.

Eva Longoria Parker may be one of the best parts of the television show “Desperate Housewives,” but that doesn’t mean her film career is going to catch fire. In fact, if she uses “Over Her Dead Body” as a calling card, it might just croak.

In the film, she plays Kate, a screechy, unlikable bridezilla who is crushed by an ice sculpture on her wedding day. The film doesn’t do much to build on the relationship she had with her much more charismatic fiance, Henry (Paul Rudd), but we are led to believe that he is devastated. So devastated that he reluctantly agrees to see a psychic named Ashley (Lake Bell) who is supposed to contact Kate’s ghost and help him move on.

Ashley is game, mostly because she wants Henry to move on into her bedroom, but things get complicated when Kate’s ghost doesn’t play along. Dead or not, she wants Henry all to herself, so she starts haunting Ashley, who is the only human who can see her.

The DVD doesn’t come with extra features, which is just as well, as the film isn’t recommended for anyone with a pulse.

I’m Not There
2½ stars
Rated R for language, some sexuality and nudity
The Weinstein Company
Available on: DVD
Writer-Director Todd Haynes’ meditation on the many aspects of musician Bob Dylan’s life is both fascinating and frustrating.

The concept – using six actors to portray the different sides of Dylan – is genius, and it offers an unusual and compelling look at the man’s extraordinary career and the mythology surrounding it. Unfortunately, the film’s pieces don’t blend into a satisfying whole, leaving audiences with good moments but an experience that is disjointed overall.

In an attempt to reduce audience confusion, Haynes gives each actor who portrays Dylan a different character name. That allows them to be viewed as separate characters, but it will be obvious to Dylan fans that they are all part of the musician’s whole.

“I’m Not There” garnered a good deal of acclaim when it was released into theaters, even earning a best supporting actress Oscar nomination for Cate Blanchett, who plays Dylan at the height of his career. Her performance is decent, but in my mind the Oscar nod was a result of voters wowed only by the fact that she played a man. Surely, she was no better than her co-stars, including Ben Whishaw, Christian Bale, Richard Gere, Marcus Carl Franklin and the late Heath Ledger.

“I’m Not There” may prove a pleasant distraction for moviegoers who enjoy abstract works, like those of filmmaker David Lynch. But those who prefer entertainment that takes a mainstream course will be better off looking elsewhere.

The movie was released on a two-disc collector’s edition that includes a commentary by Haynes, on-screen song lyrics, deleted scenes, outtakes, footage from the film’s premiere and a still gallery.

“First Sunday”: Ice Cube and Tracy Morgan play petty thugs who decide to rob a church to solve their money problems. Of course, the heist goes bad and they are forced to re-examine the direction their lives have taken.

“Bella”: Independent drama about a former soccer star and New York City waitress who connect in an unexpected, but mutually beneficial, manner. The film won the People’s Choice Award at the 2007 Toronto International film Festival.

“Teeth”: Horror-comedy about a teen girl named Dawn (Jess Weixler) who discovers she has a toothed vagina that can be put to good use when she’s a victim of sexual violence. Written and directed by Mitchell Lichtenstein.

“A Collection of 2007 Academy Award Nominated Short Films”: Terrific collection boasting all the films nominated for best live action short at this years Oscar celebration, plus three of the five shorts nominated in the animation category. Both winners, “The Mozart of Pickpockets” (live action) and “Peter & the Wolf” (animated), are included.

“Speed Racer – The Next Generation”: New animated series based on the 1967 Japanese cartoon about high tech racing. This show was made in the U.S. and focuses on a boy who is son to the original Speed. It’s being released now to promote and cash in on the live-action “Speed Racer” film, which opens May 9.

“Crossing Jordan” – Season 1: Fans of this TV drama, about a coroner (Jill Hennessy) who solves crimes, can finally sit down with all 23 of the first season episodes.

“The 4400” – The Fourth Season: Final season of the USA Network show about 4,400 people who were mysteriously abducted and then returned to Earth in a single swoop.

“Bewitched” – The Complete Sixth Season: This season of the popular TV comedy about a mortal man married to a witch (Elizabeth Montgomery) will always be remembered for its historic casting change. Dick Sargent replaced Dick York as Darrin – the mortal – changing the feel of the show forever.