Video Verdict: Reviews of ‘November Man,’ ‘A Madea Christmas’ and ‘The Giver’ 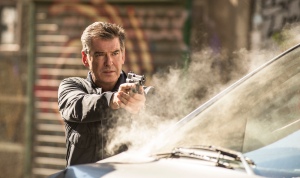 This week’s major home video releases include a holiday film from Tyler Perry, an adaptation of a popular young adult novel and a spy thriller starring Pierce Brosnan.

3 stars (out of four)
Rated R for strong violence including a sexual assault, language, sexuality/nudity and brief drug use.
20th Century Fox
Available on: Blu-ray, DVD, digital download and on demand

Pierce Brosnan was excellent in his brief stint as James Bond, a fact director Roger Donaldson (“Thirteen Days,” “The World’s Fastest Indian”) likely considered when bringing the English actor back to the spy genre. In “The November Man,” based on the Bill Granger novel “There Are No Spies,” Brosnan plays Peter Devereaux, a retired CIA agent lured back to action by his former boss, John Hanley (Bill Smitrovich).

Devereaux has little interest in returning to the field, but he agrees to one mission: retrieving a former lover from deep cover in Russia. After he takes the assignment, things go bad, his girl is killed and the CIA decides he’s a liability. That leaves Devereaux scrambling to unravel a complex series of events while running from a dangerous CIA assassin (Luke Bracey) that he trained.

“The November Man” is imperfect but entertaining, largely because Brosnan is such an appealing presence. His version of Devereaux is alternately compassionate and ruthless, a fact that doesn’t necessarily make sense but does keep the plot interesting.

There are smarter spy films. In fact, the idea that drives “November Man” is so simplistic that much of what happens seems implausible. Still, Donaldson buries the weaknesses beneath some decent plot twists and a series of solidly crafted action sequences.

Brosnan’s likable lead performance is balanced by solid work from Bracey and Olga Kurylenko, the latter playing a woman unwillingly drawn into the intrigue. “The November Man” isn’t a serious person’s spy film, but it is a reasonable genre entry that should satisfy viewers who find melodrama as entertaining as wit.

Tyler Perry’s biggest weakness as a writer-director is his penchant for predictable, melodrama-infused plot lines. Oddly, these ongoing problems seem less annoying when tied to a Christmas-themed project, and that makes “A Madea Christmas” more palatable than most of his features.

Nobody will mistake “A Madea Christmas” for “It’s a Wonderful Life,” “Miracle on 34th Street” or any of the better readings of “A Christmas Carol.” But, for someone seeking a fresh, urban film about the Christmas holiday, the effort is at least passable.

The movie was loosely adapted from Perry’s like-titled play, but the two works share few similarities. Perry reprises his role as Madea, the straight-talking senior citizen whose brash demeanor belies her golden heart. After failing miserably at a department store sales job, Madea’s niece, Eileen (Anna Maria Horsford), convinces her to join her on a road trip. Eileen is intent on visiting her daughter, Lacey (Tika Sumpter), for Christmas, even though Lacey has made it clear she wants no company.

As it turns out, Lacey is hiding the fact that she’s in a relationship with a white man (Eric Lively), something she expects her mother to take badly. This makes for especially awkward times when her man’s parents (Larry the Cable Guy and Kathy Najimy) show up for a holiday meal.

“A Madea Christmas” addresses broad themes about racism, family and – of course – the real meaning of Christmas. The movie has its heart in the right place, but it is also manipulative and silly. Whether that’s considered a bad thing will largely depend on one’s tolerance for Perry’s style.

Blu-ray and DVD extras include a collection of outtakes and a look at the forthcoming animated movie “Madea’s Tough Love.”

2 stars
Rated PG-13 for a mature thematic image and some sci-fi action/violence
Anchor Bay
Available on: Blu-ray, DVD, digital download and on demand

Young adult movies are taking increasingly dark turns, and Hollywood seems particularly obsessed with tales of youth growing up under totalitarian rule. “The Hunger Games” and “Divergent” are each set in such worlds, as is “The Giver,” a new Phillip Noyce-directed thriller based on the novel by Lois Lowry.

At first glance, Jonas (Brenton Thwaites) and his friends, Asher (Cameron Monaghan) and Fiona (Odeya Rush), seem to live in paradise. Their society has eliminated many of the world’s evils by instituting a strict code of conduct that involves well-ordered daily rituals and a clear understanding that everyone is equal. Because of this, there is no war or starvation or strife, but there is also little individuality.

When a child in this seemingly utopian society comes of age, the society’s elders assign him or her a suitable job. Jonas is shocked to learn that he has been selected to become his society’s Receiver of Memories, a rare position that is afforded unusual freedoms and responsibilities. As the Receiver, he is allowed to lie and to forgo certain social graces, but his assignment comes with a price.

Jonas must also carry the past memories of his society, which include beautiful, long-extinct traditions – think wedding parties and music – alongside horrors – think war and violent crime. Jonas’ guide through the process is the current Receiver (Jeff Bridges).

In order to properly process the past, Jonas is allowed to feel things that nobody else can, and he begins to realize that his heavily sedated society is a based on self-sacrifice and lies. He is then forced to decide whether he should attempt change or maintain the status quo.

Thwaites is believable and likable in the lead role, and Bridges is extremely good when playing gurus. Unfortunately, Noyce – who is most-often excellent – stumbles with the execution.

“The Giver” story is packed with rich, thematic material, yet the movie feels flat and predictable almost from the start. This is largely because the characters are poorly defined. Only Jonas and his mentor receive any real development, and even they should have received more attention.

Because it is difficult to identify with the players, the stakes are low for the audience. Furthermore, the film’s pace is languid, despite the fact that it covers a great deal of territory.

Noyce is successful in bringing themes from Lowry’s book to the screen, and the depth of these ideas may be powerful enough to energize at least some young viewers. The shame is that better execution might have led to a young-adult classic.

“The Expendables 3”: Yet another entry in the franchise built by packing as many action stars as possible into a single frame. Sylvester Stallone is joined by regulars Jason Statham, Jet Li, Dolph Lundgren, Randy Couture, Terry Crews and Arnold Schwarzenegger. Newcomers include Harrison Ford, Mel Gibson, Antonio Banderas and Wesley Snipes. The plot centers on Barney (Stallone) and his mercenary crew doing battle with the dangerous Conrad Stonebanks (Gibson).

“What If”: Romantic comedy starring Daniel Radcliffe and Zoe Kazan as close friends who wonder if their relationship should become more. Directed by Michael Dowse.

“Tyler Perry’s Hell Hath No Fury Like a Woman Scorned” – The Play: Video of Perry’s stage play about a modern woman (Cheryl Pepsii Riley) who takes revenge after getting played by a man.

“A Merry Friggin’ Christmas”: Joel Mchale plays a man whose parents (Robin Williams and Candice Bergen) drive him crazy. Nevertheless, he and his family get stuck celebrating Christmas with them. Things get rougher when he is forced into a road trip with his father. Directed by Tristram Shapeero.

2 responses to “Video Verdict: Reviews of ‘November Man,’ ‘A Madea Christmas’ and ‘The Giver’”