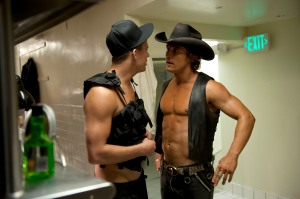 Director Steven Soderbergh’s eclectic filmography includes everything from star-studded blockbusters (“Ocean’s Eleven”) to limited-release biopics (“Che”), and he’s more than happy to juggle genres. That makes him the perfect person to helm a film about a male stripper who can’t wean himself from the perks of the job.

With “Magic Mike,” Soderbergh delivers a movie with enough star power and flash to satisfy the masses but an emotional center that’s rooted in the style of his independent efforts. The focus is on Mike Lane (Channing Tatum), a 30-year-old stripper who loves the women, money and good times that come with his job. Still, he recognizes that he’s missing something, most notably a creative outlet that involves more than shaking his booty. So, he saves as much money as possible with the dream of someday starting a furniture-building business.

Mike’s life takes a twist when he meets a 19-year-old college dropout named Adam (Alex Pettyfer) and decides to take the kid under his wing. Before long, Mike has helped Adam become a budding star at the Xquisite Strip Club in Tampa, Florida. For the club owner (Matthew McConaughey), Adam’s fresh face and youthful body is a blessing, but not everyone is pleased with Adam’s work. His straight-laced sister, Brooke (Cody Horn), is concerned about the lifestyle her brother has chosen. Brooke’s worries prompt Mike to play big brother, promising that he’ll take care of Adam, even though his abs are more defined than his sense of responsibility.

“Magic Mike” is an interesting project for Soderbergh in that much of the appeal is salacious. Since the movie is about strippers, Tatum and the other stars are often scantily clad, and that’s an undeniable selling point for female moviegoers. Still, Soderbergh refuses to glamorize the sex industry. Rather, he depicts it as a business flush with fast cash, but hindered by pitfalls.

The movie is at its best when examining the two sides of Mike, the one that loves being on stage and the one that longs to leave stripping behind. Unfortunately, Soderbergh spends more time in the strip club than he does developing Mike’s passion for furniture building. In fact, viewers never get to see him working on a piece, and that’s a major liability for a movie about a man caught between two worlds.

Fortunately, Tatum’s performance goes a long way toward making up for the movie’s deficiencies. He is a strong, versatile actor, and he gives Mike enough layers to help viewers identify with the character.

DVD and Blu-ray extras include a making-of feature centered on how the cast prepared to play male strippers.

The thought of Abraham Lincoln as an axe-wielding vampire killer is just goofy enough to generate campy appeal. Surely, that’s what allowed writer Seth Grahame-Smith (“Pride and Prejudice and Zombies”) to turn his novel into a New York Times bestseller and sell Hollywood on his self-written screenplay. Unfortunately, the concept of “Abraham Lincoln Vampire Hunter” is better than the execution.

The movie, directed by Timur Bekmambetov (“Night Watch”), is an unfortunately serious alternative history drama supposing that the American Civil War was actually a battle between vampires and humanity. Bekmambetov and Grahame-Smith do a reasonably good job explaining the premise, but the humorless presentation is a liability.

Viewers meet Lincoln (Benjamin Walker) when he is just a boy, and they learn that he hates vampires because one killed his mother. The film then follows young Lincoln’s quest to destroy the monster that ruined his life. In order to succeed, he takes instruction from Henry Sturges (Dominic Cooper), a mysterious man who knows everything about vampirism. His friends Will Johnson (Anthony Mackie) and Joshua Speed (Jimmi Simpson) also join the fight.

Walker plays Lincoln as a sort of superhero who, after training with Henry, is able to muster fantastic strength and physical dexterity. There is appeal in this portrayal of the former president, but it would have been better if Bekmambetov paused to wink at viewers, acknowledging the absurdity of the concept.

Instead, the director plays everything straight, and that makes “Abraham Lincoln Vampire Hunter” little more than an average horror thriller. Yes, it features a historical figure as the star. And, yes, the story is set against important dates in American history. Unfortunately the filmmakers don’t have much fun with these things, and it’s tough to recommend a vampire film that isn’t fun.

DVD and Blu-ray extras include a making-of feature and an audio commentary by Grahame-Smith.

Seeking a Friend for the End of the World

3½ stars
Rated R for language including sexual references, some drug use and brief violence
Universal
Available on: DVD, Blu-ray, digital download and on demand

With her first feature film, writer-director Lorene Scafaria asks viewers to imagine that the extinction of mankind is imminent. The result is one of the most compelling pictures of 2012.

“Seeking a Friend for the End of the World” focuses on Dodge Peterson (Steve Carrell), a good-natured insurance salesman who learns – along with the rest of the planet – that Earth will be destroyed by a meteorite in just 21 days. Moments later, his wife leaves him, and Dodge seems destined to spend his final weeks alone. While coming to terms with his predicament, Dodge meets Penny (Keira Knightley), a young neighbor with equally serious relationship issues. Together, they take a journey hoping to reunite with loved ones and find solace amidst tragedy.

Although Scafaria’s film uses Armageddon as a premise, it isn’t really about mass death and destruction. It’s about the choices a person is forced to make when confronted with his or her mortality. It’s also about mankind’s capacity for love and compassion.

In an effort to address these topics, Scafaria delivers a vision of pre-Armageddon Earth that’s as varied as society itself. There are characters who – unable to live with the impending doom – kill themselves immediately. There are others who riot and become violent. And there are those who go about business as though nothing has changed.

Dodge and Penny are keenly aware of the limited time they have and, because of this, they can’t bring themselves to find any sense of normalcy. They do, however, find small windows of pleasure, and hungrily take advantage of them.

The most impressive thing about “End of the World” is its capacity to make audiences think. Because death is a universal subject, most viewers will naturally imagine themselves in the situation depicted by the film. The movie is also a remarkable relationship drama. In just 101 minutes, Carrell and Knightley create well-rounded, multi-dimensional characters that feel earthy and real, despite the improbability of their situation. This lays the groundwork for remarkably deep connections between the characters and their audience.

“Tinker Bell – Secret of the Wings”: Disney’s direct-to-video Tinkerbell movies have become a substantial hit with fans, and this is the third feature-length entry. The animated story follows Tinkerbell and friends as they journey into the mysterious Winter Woods. The movie’s voice cast includes Anjelica Huston, Timothy Dalton, Lucy Lui and Raven-Symone.

“Sunday Bloody Sunday”: Director John Schlesinger’s 1971 film about two Londoners (Peter Finch and Glenda Jackson) having a romantic affair with the same man (Murray Head). The now-classic movie was freshly restored with a high-definition digital transfer by the Criterion Collection.

“The Ambassador”: Documentary in which Danish director Mads Brugger pretends to be a European ambassador in an effort to expose government corruption and crime in the Central African Republic.

“Star Wars – The Clone Wars” – The Complete Season Four: This animated foray into the “Star Wars” universe continues to draw viewers to Cartoon Network, and this set includes 22 recent episodes.

“Disasters Deconstructed – A History of Architectural Disasters”: This History Channel boxed set collects a number of programs examining the most notorious disasters in human history. The content includes an extensive look at the Hindenburg tragedy, a program about the Titanic and a close-up view of noteworthy engineering failures.

“Fantasy Island” – The Complete Third Season: This 1970s and ’80s TV drama centered on a South Pacific island where visitors could live out personal fantasies. In the 23 episodes on this DVD set, Ricardo Montalban and Herve Villechaize play alongside a host of well-known guest stars.