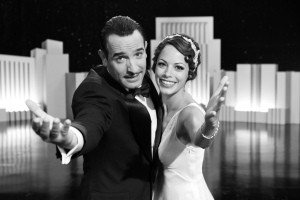 Jean Dujardin, left, and Berenice Bejo star in “The Artist.”

It’s a busy week on home video, with five major theatrical releases making their way to DVD and Blu-ray. Still, one movie – this year’s best picture Oscar winner – is the unquestioned leader of the pack.

4 stars (out of 4)
Rated PG-13 for a disturbing image and a crude gesture
Sony
Available on: DVD and Blu-ray

The concept of a silent film winning a best picture Academy Award in the 21st century may seem bizarre, but one look at “The Artist” explains the fuss. The movie, which won not only best picture but four additional Oscars this year, is an artistic masterwork that pays tribute to our cinematic past while telling a great story.

French actor Jean Dujardin stars as George Valentin a charismatic and popular silent film actor living the high life in 1920s Hollywood. Alas, his star begins to fade with the invention of talking pictures. To George’s dismay, audiences are all too willing to abandon their old idols in favor of a new crop of “talking” stars. The sting is especially painful for George because one of the new breed of actors is Peppy Miller (Berenice Bejo), a beautiful, young talent that he helped discover.

Perhaps the most ingenious thing about “The Artist” is that it is largely presented as a silent, black-and-white movie. There is virtually no dialogue, and director Michel Hazanavicius uses the film’s Oscar-winning score to great effect. He also “cheats” periodically, using sound effects to underscore points that the story is making.

Along with winning best picture and best original score, “The Artist” landed Oscars for costume design, Dujardin’s outstanding lead performance and Haznavicius’ direction. It was also nominated for another five Oscars that it didn’t win, and the widespread acclaim demonstrates just how great the picture is.

DVD and Blu-ray extras include a blooper reel, a Q&A with the filmmakers, and several making-of featurettes.

Too often, film updates of classic TV shows rely on name recognition rather than quality storytelling. Since these projects are almost always artistic failures, “21 Jump Street” is a wonderful surprise.

This take on the like-titled 1980s TV show boasts a terrific script, a top-notch cast and an artistic vision that sets it apart from its inspiration. Jonah Hill gets much of the credit because he not only stars in the film, he helped conceive the story, which is only loosely based on the “Jump Street” TV show.

The focus is on Morton Schmidt (Hill) and Greg Jenko (Channing Tatum), former high school classmates who meet while making their way through police academy. In school, they ran in different circles because Schmidt was a nerd and Jenko was a jock. In the academy, they discover that they can help each other by putting their respective talents to work.

After academy, both men are selected – because of their youthful appearances – to go undercover at a high school in hopes of busting a drug ring. But school is much different a second time around.

Rather than trying to match the tone of the original “21 Jump Street,” directors Phil Lord and Chris Miller opted for a full-on R-rated comedy. That means sex gags, dirty language and – most importantly – plenty of laughs. Although Tatum isn’t known as a comedic actor, he has excellent timing and he works beautifully with Hill.

If every Hollywood comedy were as clever as “21 Jump Street,” it would be a lot more fun to go to the movies.

DVD and Blu-ray extras include a making-of feature, deleted scenes and a filmmaker’s commentary.

Wrath of the Titans

Only rarely do sequels surpass their predecessors in terms of quality, but “Wrath of the Titans” is considerably more entertaining than its 2010 precursor, “Clash of the Titans.” That doesn’t mean “Wrath” is beyond criticism. It’s still an in-your-face action movie, but it’s better crafted than its inspiration.

The story is set 10 years after “Clash,” at a time when the power of the Greek gods is waning because humans have lost faith in them. As a consequence, long-imprisoned monstrosities, known as Titans, are poised to break free and wreak havoc on the humans and gods alike. Perseus (Sam Worthington), the demigod son of Zeus, has settled into a quiet life as a fisherman, and he is reluctant to get involved, despite urging from his father. He is persuaded, however, when Zeus is betrayed and held prisoner in the underworld.

The bulk of “Wrath” follows Perseus as he journeys to the underworld with the human Queen Adromeda (Rosamund Pike) and another demigod named Agenor (Toby Kebbell). Their goal is to set Zeus free and, ultimately, prevent the Titans from destroying mankind. This journey is, of course, ridiculously dangerous, and it pits Perseus and company against a number of frightening beasts, including Cyclopes and a minotaur.

Director Jonathan Liebesman (“Battle Los Angeles”) moves the action at a respectable pace, and the special effects are fantastic. Add in a nice leading performance by Worthington, and you have a movie that works more often than not, despite placing action above substance at every turn.

DVD and Blu-ray extras include storyboard comparisons, deleted scenes and a number of making-of featurettes.

The Snow White fable is enjoying a serious resurgence. Along with “Snow White and the Huntsman,” which is making its way through theaters now, Snow plays a key role in the hit TV show “Once Upon a Time.” Viewers looking for yet another view of the beloved character can check out “Mirror Mirror,” a lighthearted-yet-enjoyable update by director Tarsem Singh.

In Singh’s version, Lily Collins plays Snow as the traditionally cheerful princess that most of us have come to love over the years. She is bubbly, optimistic and, of course, remarkably beautiful. Her stepmother, the evil Queen Gertrude (Julia Roberts), is distressed both by Snow’s beauty and the fact that she is the rightful ruler of their people. So, she sets the princess up for a fall.

Although the movie is different than Disney’s 1937 animated version, there are enough similarities to keep fans of the former satisfied. Most notably, Snow befriends a group of clever dwarves and has more than one encounter with a handsome prince (Armie Hammer).

Singh’s movies are always visual marvels, and he meets his typically high standards here. Most sequences feel as though they are plucked from a storybook, and that adds to the charm of the project. Singh was clearly shooting for a tone akin to that of “The Princess Bride,” and he largely achieves it.

2 stars
Rated PG-13 for sexual situations including dialogue, language and some drug-related humor
Paramount
Available on: DVD and Blu-ray

The third time is not a charm in terms of director Brian Robbins’ collaborations with comedian Eddie Murphy. The two paired previously on 2007’s “Norbit” and 2008’s “Meet Dave,” and neither film is a shining point on their resumes. “A Thousand Words” is a substantial improvement, but it still falls short.

The movie stars Murphy as Jack McCall, a fast-talking literary agent who has achieved wild success by saying whatever it takes to close a deal. Jack’s life takes a drastic turn, however, when he tries to sign a well-known spiritual guru named Sinja (Cliff Curtis). Before anything can be published, a tree sprouts in Jack’s back yard, and starts shedding leaves for every word he speaks. Sinja notes that Jack and the tree are bonded and that Jack had better stop talking. Otherwise, the tree might lose all its leaves, a fate that often leads to death.

For the remainder of the picture, the normally verbose Jack attempts to make it through his days saying as little as possible. On paper, this seems like it might be fun. In practice, it’s not.

Murphy is a fine comedian when presented with good material, but “A Thousand Words” just isn’t funny.

“The 39 Steps”: Criterion Collection release of director Alfred Hitchcock’s 1935 thriller about a Canadian tourist who gets swept up in an international conspiracy. Robert Donat and Madeline Carroll star.

“LEGO Ninjago Masters of Spinjitzu” – Season One: First 13 episodes of the Cartoon Network animated series about ninjas protecting their world from evil forces.

“Sector 7”: Korean science-fiction film about an oil-rig crew attacked by a sea monster. Directed by Kim Ji-hoon. Presented in Korean, with an English-language dub and English subtitles.

“Damages” – The Complete Fourth Season: The fifth and final season of “Damages” will begin airing on DirecTV’s Audience Network July 11. In the meantime fans can enjoy the 10 most recent episodes of the legal drama on this boxed set. Glenn Close and Rose Byrne star.