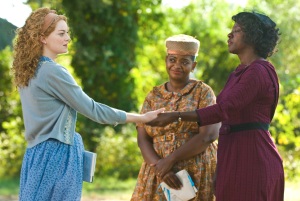 This week’s major home video releases include an oddball science-fiction adventure, a sequel to one of the biggest comedy hits of all time and a drama that may wind up in the Oscar race.

4 stars (out of four)
Rated PG-13 for thematic material
Disney
Available on: DVD, Blu-ray, digital download and on demand

Kathryn Stockett’s novel “The Help” has spent more than 100 weeks on the New York Times bestseller list, and the movie adaptation is easily one of the best films of 2011. Set in Jackson, Mississippi, in the 1960s, the picture focuses on Eugenia “Skeeter” Phelan (Emma Stone), a progressive white journalist disgusted with the way black maids are being treated. With designs on both making a difference and making her name as a writer, she convinces two maids – Aibileen Clark (Viola Davis) and Minny Jackson (Octavia Spencer) – to tell their stories confidentiality.

Even though Eugenia promises not to use real names in her work, it’s a dangerous proposition for all three women because racial intolerance is epidemic. In fact, one of Eugenia’s childhood friends, a socialite named Hilly Holbrook (Bryce Dallas Howard), is among the most bigoted people in town.

“The Help” is an admirable movie not just because it spotlights America’s ugly history of bigotry, but because screenwriter and director Tate Taylor crafts his story with such care. Taylor gets the historical setting just right, and every scene in the film is perfectly staged and presented.

Much of the success is due to the cast. Stone is rapidly becoming one of the hottest actresses in Hollywood, and she is strong throughout. Even better are Davis and Spencer, both of whom turn in powerhouse performances that could land them in the forthcoming Oscar race.

“The Help” is the rare movie that is virtually flawless. The acting is superb, the message powerful and the technical execution pitch perfect. In a year that has been weaker than normal in terms of cinematic gold, “The Help” is both a standout and a gift.

DVD and Blu-ray extras include a music video by Mary J. Blige and deleted scenes with introductions by Taylor.

3½ stars
Rated R for some violence and language
Universal
Available on: DVD, Blu-ray, digital download and on demand

With “The Debt,” director John Madden has delivered his best film since the 1988 romance “Shakespeare In Love.” The movie, which is significantly darker than “Shakespeare,” is set in 1997, 30 years after former Mossad agents Rachel Singer (Helen Mirren), Stephan Gold (Tom Wilkinson) and David Peretz (Ciaran Hinds) embarked on a dangerous mission in East Berlin.

Rachel and Stephan – who married and divorced in the wake of the mission – reunite to celebrate the launch of a book that their daughter (Romi Aboulafia) has written about their youthful exploits. The occasion turns tragic, however, when David commits suicide in a shocking manner.

As the film progresses, Madden shifts back and forth between the events of 1997 and those that the trio experienced in Berlin. To achieve this, he uses a double cast, with Jessica Chastain playing young Rachel, Marton Csokas playing the youthful Stephan and Sam Worthington playing the younger version of David. Both casts are superb.

It’s not just the casting that makes “The Debt,” however. The story – adapted from a 2007 Israeli film – is fraught with tension, and there are several terrific twists. Madden lets the entire affair play out at just the right pace, slowly revealing details about his characters while retaining enough mystery to keep things exciting.

Along with being a wonderful surface-level thriller, the film has some important things to say about life. Most importantly, it reflects on the way pivotal events in one’s past can have a profound effect on a person’s future. As a genre, espionage thrillers tend to be thoughtful, but only the best are as consistent and refined as “The Debt.”

Director Todd Phillips’ follow-up to “The Hangover” isn’t so much a sequel as a remake. The cast is the same, the tone is the same and – aside from slight variations – the plot is the same. For moviegoers looking to relive their first “Hangover” experience, the similarities may be a selling point. For everyone else, they’re a reminder of how shallow and barren Hollywood can be.

The setup has friends Phil Wenneck (Bradley Cooper) and Doug Billings (Justin Bartha) preparing for the wedding of their dentist pal, Stu Price (Ed Helms). The buttoned-downed Stu is determined to avoid the disaster that occurred when their pack travelled to Las Vegas for Doug’s bachelor party (events depicted in the first film). So, Stu explains that he wants his friends to accompany him to Thailand for his nuptials … nothing more.

Things unravel when Stu is forced to invite Doug’s brother-in-law, Alan (Zach Galifianakis), along for the ride. Alan is as brash and socially inept as he was in the first “Hangover,” and he immediately rubs everyone the wrong way. The tension starts when Alan complains about Stu’s future brother-in-law, a brilliant teen named Teddy (Mason Lee), travelling with them. This isn’t a problem for long, however. Once the crew reaches its destination, what was supposed to be a quiet night with a few beers turns into a nightmare.

Phil, Stu and Alan wake up in a Bankok hotel in the company of the international gangster they met in the first film, Mr. Chow (Ken Jeong). They can’t remember any of the events of the previous night, and Teddy is missing. From this point forward, the movie plods along as its predecessor did, with Phil, Stu and Alan struggling to decipher the events of the previous night.

“The Hangover Part II” has its fair share of laughs, and Phillips moves the action at a respectable pace. The trouble is, he doesn’t deliver anything new. When the movie is funny, it’s funny in the same way as the original, and when it’s not funny it’s redundant.

Cooper, Helms and Galifianakis have chemistry, and there’s some joy in watching them feed off one another. One can’t help but think, however, that it would all be better if they had new material.

Home video extras include a gag reel, a short on Phillips’ creative process and a bit where Mr. Chow takes viewers on a tour of Bangkok.

3 stars
Rated PG-13 for intense sequences of Western and sci-fi action and violence, some partial nudity and a brief crude reference
Universal
Available on: DVD, Blu-ray and digital download

Jon Favreau may have started as an indie favorite, but his success as the director of “Iron Man” moved him to Hollywood’s A List. With “Cowboys & Aliens,” Favreau is bringing another comic book to the screen, although most viewers won’t be familiar with the Scott Mitchell Rosenberg graphic novel that served as the film’s inspiration.

The movie centers on Jake Lonergan (Daniel Craig), an old West gunman who wakes up in the middle of the desert with a gash in his side, a large metal bracelet on his wrist and complete amnesia. Confounded, he makes his way to the nearest town and creates an enemy by roughing up the son of a cattle baron named Woodrow Dolarhyde (Harrison Ford).

Woodrow is determined to take vengeance, but his plan goes awry when spacecraft attack, abducting his son and a number of other citizens. In the midst of the battle, Jake manages to down one of the aircraft by firing a blast from the bracelet on his wrist. He isn’t sure how he did it, but it’s clear that he’s the only one capable of effectively battling the aliens. This leads Jake and Woodrow to an uneasy truce with the goal of tracking the aliens and rescuing the abductees.

The plotting is silly, but there’s pleasure to be taken in Favreau’s blend of old-school Western and modern science-fiction spectacle. Because the cowboys are so outgunned, the idea of them tracking technologically advanced aliens doesn’t hold up to scrutiny. Still, it’s difficult to resist the characters that Craig and Ford create.

Jake is a classic Western loner, a talented gunman with a haunted past. Ford, who doesn’t often play a bad guy, paints Woodrow as a pitiless businessman who treats friends and enemies with equal disdain. Still, there’s a sense of honor to Woodrow, and that’s what makes things compelling when he and Jake team up.

Favreau wasn’t able to capture the magic of “Iron Man” with “Cowboys & Aliens,” but he did produce a movie that is as enjoyable as it is fast-paced and ridiculous.

Home video extras include several making-of features and an audio commentary by Favreau.

“Friends With Benefits”: Justin Timberlake and Mila Kunis play young professionals who decide to have commitment-free sex. Complications ensue after a few trysts. Directed by Will Gluck (“Easy A,” “Fired Up!”).

“Dragon Tattoo Trilogy” – Extended Edition: Director David Fincher is bringing an American film adaptation of writer Stieg Larsson’s “The Girl With the Dragon Tattoo” to theaters Dec. 21. Although any work by Fincher is worth considering, Swedish filmmakers have already done a fine job bringing Larsson’s characters to the screen. This home video release includes extended editions of all three Swedish movies – “The Girl With the Dragon Tattoo,” “The Girl Who Played With Fire” and “The Girl Who Kicked the Hornet’s Nest.” The theatrical versions of these movies are already available in the U.S., but this boxed set features new, extended cuts that include characters and plot developments not seen in the original editions.

“Life, Above All”: South African drama about a 12-year-old girl (Khomotso Manyaka) who leaves home to search for her mother after a nasty rumor forces the woman to flee their village. The film, directed by Oliver Schmitz, won the Francois Chalais Prize at the 2010 Cannes Film Festival. Presented in Sotho with English subtitles.

“Design for Living”: Criterion Collection release of director Ernst Lubitsch’s 1933 film adaptation of the Noel Coward play. The film stars Miriam Hopkins as an artist unable to choose between two attractive Americans that she meets while on a train to Paris. Gary Cooper and Fredric March also star.

“Big Love” – The Complete Series: HBO is rolling the fifth and final season of “Big Love” to video this week, and fans can buy it solo or as part of a “Complete Series” boxed set. The latter includes every episode of the show, which is about modern-day polygamists.

“Underbelly” – The Trilogy: Twelve-disc set including the first three miniseries in the “Underbelly” TV franchise. The Australian dramas, which aired in the U.S. on DirecTV’s Audience Network, are based on real-life criminal activity in Australia.

“Transformers Prime – Darkness Rising”: First five episodes of the “Transformers Prime” cartoon series, which offers new adventures from the shape-shifting Autobots and Decepticons. In the U.S., the show airs regularly on The Hub.

“24/7 Penguins/Capitals – Road to the NHL Winter Classic”: Documentary series focused on the Pittsburgh Penguins and Washington Capitals and their preparation for the 2011 Winter Classic.

Forrest Hartman is an independent film critic whose byline has appeared in some of the nation’s largest publications.E-mail him at forrest@forresthartman.com.