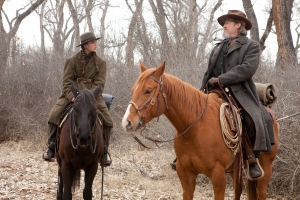 Hailee Steinfeld, left, and Jeff Bridges star in the Western “True Grit.” The film is a remake of John Wayne’s 1969 picture by the same name.

This week’s home video releases are anchored by two powerful dramas: one that paints an ugly picture of corporate America and one that received 10 nominations in the most recent Oscar race.

3½ stars (out of four)
Rated PG-13 for some intense sequences of Western violence including disturbing images
Paramount
Available on: DVD and Blu-ray

Remakes are a dime a dozen in Hollywood, but few boast the pedigree and quality of Joel and Ethan Coen’s “True Grit.” The original, 1969 Western earned screen icon John Wayne his only Oscar, a best actor nod for his portrayal of gruff U.S. Marshal Rooster Cogburn.

Wading into such revered territory would be daunting for most filmmakers, but the Coen brothers have repeatedly proven they are among the best directors working today. For “True Grit,” they started by adapting Charles Portis’ novel – the basis for both films – into a screenplay. Then, they gathered a remarkable assortment of actors to bring the material to life.

Newcomer Hailee Steinfeld plays Mattie Ross, an articulate teen girl who persuades the drunken Rooster Cogburn (Jeff Bridges) to track down the man who killed her father. During their journey, they meet a Texas Ranger named LaBoeuf (Matt Damon) who is chasing the same man. The film follows Rooster and LaBoeuf through their manhunt with the indomitable Mattie by their side.

“True Grit” is a remarkable film on many fronts, starting with the Coens’ wonderful screenplay and ending with the fact that even the actors in bit roles are phenomenal. Perfect examples are Josh Brolin and Barry Pepper. Both men play outlaws with relatively little screen time, but their performances add tremendous depth to the project. The three leads (Steinfeld, Bridges and Damon) are also astonishingly good, and both Steinfeld and Bridges received Oscar nominations for their efforts.

In all, “True Grit” was nominated for 10 Academy Awards, including best directing, best adapted screenplay and best picture. It didn’t win in any category, but that doesn’t diminish the quality. Westerns don’t get much better than this.

DVD and Blu-ray extras include a handful of making-of features, including bits on the cast and 1880s costuming.

While “True Grit” offers a compelling look at the historic wild West, “The Company Men” focuses on our modern-day equivalent: the board rooms of corporate America. Written and directed by John Wells, the film accurately depicts the astonishing level of greed that has led many corporate executives to take bonuses while simultaneously firing or cutting the pay of their employees.

At the center of the action is Bobby Walker (Ben Affleck), a cocky sales executive who is dismayed when the GTX Corporation sends him packing after a round of downsizing. Despite immense support from his wife (Rosemarie DeWitt), Bobby remains in denial for months, only coming to terms with his situation after he loses his Porsche and home.

That doesn’t mean the film is flawless. In fact, Wells made a major misstep by including a subplot where McClary has an affair with another company executive (Maria Bello). This sidebar adds nothing to the story and is so poorly developed that it actually detracts. Still, the other elements of the film are so well thought out and executed that it’s easy to overlook a single blunder.

DVD and Blu-ray extras include a making-of feature, deleted scenes, an alternate ending and an audio commentary by Wells.

Just Go With It

Despite broadening his artistic reach for films like “Punch-Drunk Love,” “Spanglish” and “Reign Over Me,” the bulk of Adam Sandler’s work is still in lowest-common-denominator comedies. The latest example is “Just Go With It,” a movie that starts and finishes with a weak premise yet manages to squeeze a few laugh-out-loud moments into its 116-minute run.

Sandler plays Danny Maccabee, a successful plastic surgeon whose odd pickup technique involves pretending to be married. This means he always has a faux wedding ring in his possession, something that becomes problematic when he meets a woman (Brooklyn Decker) he might actually want a future with. She discovers the ring and demands an explanation. Not wanting to reveal his playboy ways, Danny lies and says he’s in the midst of a divorce.

The next thing we know, doctor Danny is convincing his dedicated office assistant, Katherine (Jennifer Aniston), to pose as his soon-to-be ex-wife. Why any human being, let alone a supposedly intelligent physician, would hatch such a hair-brained scheme is unexplained, meaning audiences have to follow the title’s lead and simply “go with it.”

As bad as the setup is, Sandler is a funny man and the also-funny Nick Swardson offers reasonably good supporting work. Together, they occasionally break from the monotony of the plot to deliver well-staged bits worthy of a laugh or two. The problem is, even these good moments feel like shorts inserted out of desperation rather than to serve the greater story.

DVD and Blu-ray extras include a blooper reel, deleted scenes and two audio commentaries, one featuring Sandler and Swardson and one by director Dennis Dugan.

Most film buffs know that James Cameron is an avid scuba diver, so it’s not surprising that he would choose to produce a film about adventurers trapped in an underwater cave. It’s also not surprising that Universal would promote that film – “Sanctum” – by bandying Cameron’s name about. After all, the man has written and directed a handful of the biggest hits of all time.

The thing is, Cameron was merely a producer on “Sanctum,” meaning all the artistic heavy lifting was left to director Alister Grierson and writers John Garvin and Andrew Wright. The result is a film that’s worthwhile but not as powerful as Cameron’s best.

Loosely based on a traumatic incident that Wright experienced, the film tells of several divers trapped when a freak storm blocks the exit to the underwater cave they’re exploring. Desperate, the group, led by a hardened veteran named Frank McGuire (Richard Roxburgh), tries to find an alternate exit.

The visuals in “Sanctum” are appealing and Grierson gives the action an appropriately claustrophobic intensity, leading to numerous edge-of-the-seat moments. Unfortunately, the film’s dialogue and relationship dramas aren’t nearly as appealing. The project also gets increasingly operatic as it moves toward its climax. Still, it’s easy to get wrapped up in the lives of the characters, and even easier to imagine one’s self in their terrifying predicament.

DVD and Blu-ray extras include deleted and extended scenes, a look at the real events that inspired the film, a making-of short and three audio commentaries.

“Another Year”: Dramatic comedy about four seasons in the life of Tom (Jim Broadbent) and Gerri (Ruth Sheen), a couple that has remained happily married despite constant drama in the lives of their friends. The film was written and directed by Mike Leigh (“Vera Drake,” “Topsy-Turvy”) who received an Oscar nomination for his screenplay. Lesley Manville and Imelda Staunton also star.

“Nice Guy Johnny”: The latest indie effort from writer-director-actor Edward Burns. The film tells the story of Johnny Rizzo (Matt Bush), a young guy whose fiancee expects him to give up his dream job and work in her father’s cardboard box company. Before that can happen, Johnny’s playboy uncle (Burns) whisks him away for a wild weekend.

Marx Brothers favorites: Universal is re-releasing five popular movies from Groucho, Harpo, Chico and Zeppo Marx: “Duck Soup,” “Animal Crackers,” “Horse Feathers,” “Monkey Business” and “The Cocoanuts.” Each is available individually, which means fans can pick and choose the titles they want rather than being forced to buy an entire boxed set.

HBO baseball releases: Baseball season is in full swing (pun intended) and HBO is celebrating by rolling its three “When It Was a Game” documentaries into a single “Complete Collection” set. If that’s not enough baseball for you, HBO is also serving up the Blu-ray debut of “61*.” That drama tells the story of Mickey Mantle’s and Roger Maris’ historic run at Babe Ruth’s single-season home run record.

“Transformers – Beast Wars”: Shout Factory is rolling out two collections filled with episodes from the 1990s animated series about shape-shifting beings locked in conflict. The first collection is limited to the show’s first season and is being sold in stores nationwide. The second collection includes all 52 episodes of the show and is only available at shoutfactorystore.com.

“Madagascar”: Documentary film focused on the world’s fourth-largest island and the unusual wildlife that populates it. Narrated by David Attenborough.

“Hell in the Pacific – Prisoners of the Japanese”: Documentary film about soldiers imprisoned by the Japanese Empire during World War II. The movie includes first-hand accounts from prisoners of war as well as archival footage.

Forrest Hartman is an independent film critic whose byline has appeared in some of the nation’s largest publications. E-mail him at forrest@forresthartman.com.