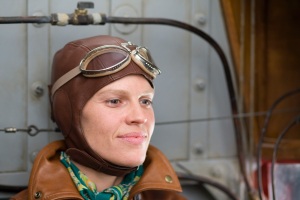 This week’s home video releases include a romantic comedy featuring Jennifer Aniston and Aaron Eckhart, an animated picture from Marvel Comics and a biopic of aviation legend Amelia Earhart.

Director Mira Nair’s look at the life of Amelia Earhart is both frustrating an intriguing, a demonstration of what can happen when a fine filmmaker fails to assemble the best possible script.

Where Nair succeeded without question is in the casting Hilary Swank, a great actress who slips effortlessly into Earhart’s skin and makes us believe she’s a woman of the early 20th century. Swank not only looks like Earhart, she does a reasonably good vocal impersonation and – most importantly – captures the aviatrix’s passion. It’s an excellent performance, which will likely be largely overlooked because of the unevenness of the film.

With Swank’s help, Nair does a good job demonstrating the adventurous nature that drove Earhart to attempt stunning feats of aviation and propelled her to international stardom. Where Nair fails is in the presentation of Amelia’s personal life. A good deal of screen time is devoted to her marriage to publicist and publisher George P. Putnam (Richard Gere) and a supposed affair between Amelia and aviation official Eugene Vidal (Ewan McGregor), father of writer Gore Vidal. While it’s clear that the young pilot is driven to cross oceans and further women’s rights, her attraction to these men seems forced and overly condensed. In fact, her courtship with Putnam is handled in such a haphazard manner that it’s not really clear when they became romantically involved. Her long-rumored relationship with Vidal is dealt with even less skillfully, leaving viewers longing for the next flying sequence.

Fortunately, the flying is handled very well. Earhart is best known for her long-distance treks, and it can be difficult to make a lengthy journey seem suspenseful. But Nair has the perfect touch in that regard. It’s harrowing when Amelia flies through a raging storm during a solo flight across the Atlantic Ocean, and viewers sense the difficulty when she struggles to keep her eyes open during less dramatic stretches. Amelia’s last, deadly flight is also particularly well staged. Although Nair was forced to rely largely on speculation, her depiction of the final moments of both Earhart and navigator Fred Noonan (Christopher Eccleston) are believable and intense.

In the end, “Amelia” is a tale of two pictures. There’s Nair’s excellent portrait of an adventurous woman engaged in death defying feats, and there’s her lackluster portrayal of the same woman juggling two men that she doesn’t seem passionate about. It would have been a much better movie had she chosen one angle or another.

I have to admit there’s appeal in the story of a self-help guru who doesn’t have enough faith in himself to take his own advice. Alas, director and co-writer Brandon Camp has driven this promising idea into the ground.

The biggest problem is that Camp’s guru, Dr. Burke Ryan (Aaron Eckhart), has written what must be the worst book in the history of self help. We know this because, in plodding voiceover, he says things like:

“Sometimes, despite your best efforts otherwise, life will give you lemons. When that happens, you’ve got two choices friend. You can wear a sour face or make lemonade.”

“When one thing ends, something else begins.”

When a guy builds a book around advice that was clichéd a decade ago, you know he’s not very good. And when a director makes a film about a guy who writes a book … well you get the idea.

To his credit, Eckhart does his best to make Burke a real person, even when the script asks him to do things that make no sense for his character or any rational human being. In fairness, viewers can buy the fact that Burke is unstable because he turned the death of his wife into national fame by writing a book on how people can recover from the loss of a loved one. And he feels bad about it.

Although the book was – lord knows how – a sensation, Burke doesn’t practice anything that he preaches. He drinks heavily and has failed to come to terms with the accident that took his wife’s life. He does, however, find a spark of his former self when he meets a flower shop owner named Eloise (Jennifer Aniston). She’s pretty, isn’t impressed by the fact that he’s a big-time author, and she really likes obscure words. That, of course, in the world of romantic comedies, makes her his soul mate.

If it weren’t for a surprisingly touching ending made better by an appearance from Martin Sheen, the movie would be unwatchable. As is, you can watch, but I don’t suggest it.

DVD extras include deleted scenes, a making-of feature and an audio commentary with Camp, Thompson and executive producer Rick Solomon.

Marvel Comics has built quite a franchise with its original animated features, and “Planet Hulk” is one of the best entries yet.

The movie begins with Earth’s heroes sending the unpredictable and devastatingly powerful green monster known as Hulk into space, where they intend for him to land on an uninhabited planet and live peacefully. Instead, Hulk damages his spacecraft and lands on a planet named SAKAAR, where an evil king turns him into a gladiator.

This particular Hulk tale is different, in that the green monster’s alter ego, Bruce Banner, never makes an appearance. This feature also presents Hulk as well spoken and intelligent, although more than happy to talk with his fists when necessary. Some viewers may prefer the Hulk that grunts and runs around out of control, but this is an interesting take on the character and the story is entertaining.

Although not as technically wondrous as today’s best theatrical cartoons, the animation is solid and the storytelling is respectable. In other words, this is a reasonably good direct-to-video offering.

The biggest knock on the project is that director Frank Paur made it unnecessarily bloody. The film is unrated, but would likely hover somewhere around PG-13. While I’m certainly not against violence or adult themes in cartoons, a handful of the gory moments here seem added without regard for the storytelling.

The movie is available as part of multiple home video releases, including a two-disc special edition. Extra features vary, but both the two-disc DVD release and Blu-ray release include multiple audio commentaries by the filmmakers, a couple making-of features and two Marvel motion comics.

“Zombieland”: Sadly, a review copy of this popular horror-comedy was not available at press time. The movie stars Woody Harrelson, Jesse Eisenberg, Emma Stone and Abigail Breslin as humans who take a long road trip in hopes of finding sanctuary from a world overrun by zombies. The movie got overwhelmingly positive reviews when it was released into theaters last year.

“Adam”: Hugh Dancy stars as a handsome autistic man who strikes up an unlikely romance with a beautiful teacher (Rose Byrne). But there’s no escaping the fact that they see the world in different ways. Directed by Max Mayer.

“Ong Bak 2 – The Beginning”: Martial artist Tony Jaa stars in this prequel to “Ong Bak: The Thai Warrior.” In the film, young Ting (Jaa) must leave his rural home and travel to Bangkok in hopes of recovering one of his village’s sacred artifacts. High-kicking action ensues.

“The WolfMan”: In anticipation of the Feb. 12 release of its new werewolf saga, “The Wolfman,” Universal is trotting out a two-disc special edition DVD of the 1941 version starring Lon Chaney Jr. The release includes the movie, plus numerous extra features.

“Wanda Sykes – I‘ma Be Me”: Actress, comedian, writer and producer Wanda Sykes performs solo in this HBO comedy special. She hits on a variety of topics including having a black president, coming out of the closet, healthcare, and motherhood.

“More Than a Game”: Sports documentary about the Akron Fab Five, the Ohio basketball team that NBA superstar LeBron James played on while in high school. James and his buddies Sian Cotton, Dru Joyce III, Willie McGee, and Romeo Travis recount their triumphs and tribulations along with their coach, Dru Joyce II.

“Air Bud Golden Receiver”: The athletic canine Buddy trades his basketball for a football in this Disney adventure that proves a dog can score on the gridiron. Trouble ensues, however, when Russian circus owners steal Buddy to capitalize on his talents.