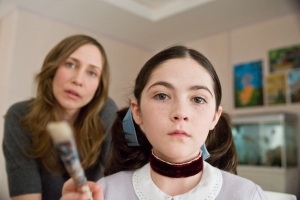 This week’s DVD crop has something for everyone. There are two animated films for kids, a new Woody Allen effort for their parents and a first-rate horror film for anyone looking for a Halloween scare.

Orphan
3½ stars (out of four)
Rated R for disturbing violent content, some sexuality and language
Warner Brothers
Available on: DVD and Blu-ray

Horror movies that paint a child as the villain are always creepy, but only occasionally do we get one as well made and disturbing as “Orphan.”

Vera Farmiga and Peter Sarsgaard star as Kate and John Coleman, a couple mourning the loss of their third child. Rather than try to have another baby, they decide to adopt, opting for a polite Russian girl named Esther (Isabelle Fuhrman). The girl is eccentric but she also seems extremely bright, and she immediately develops a bond with the Colemans’ young daughter, Max (Aryana Engineer). Esther doesn’t get along as well with brother Daniel (Jimmy Bennett), but nobody is concerned until one of Esther’s classmates accuse her of a violent act.

Slowly, Kate begins to have doubts about Esther, but John thinks she’s just paranoid. Still, trouble follows wherever Esther goes, and the family finds itself in increasingly frightening and perilous situations.

“Orphan” has some predictable horror moments, but director Juame Collet-Serra’s excellent pacing makes them instantly forgivable. The movie also features excellent performances by Fuhrman, Sarsgaard and Farmiga and one of the best third-act twists I’ve seen in some time.

DVD extras are fairly limited but there is a collection of additional scenes, including an alternate ending.

This third entry to the “Ice Age” franchise fails to offer anything revelatory, but it’s still fun to spend time with the colorful animated characters that made the first two films a hit.

The movie begins with Manny and Ellie the wooly mammoths preparing for the birth of their first child. As they get ready for parenthood, Sid the sloth decides that he, too, should be a father, so he adopts several eggs he finds in an ice cave. When they hatch, Sid finds himself caring for three baby Tyrannosaurs, and it’s not long before their real mother arrives and carries Sid and the babies away.

Determined to rescue their pal, Ellie, Manny and Diego the tiger try to track him down. They get more than they bargained for when the mother Tyrannosaurus leads them into a heated, underground lair populated by dinosaurs that were thought to be extinct.

As with the previous “Ice Age” movies, the film is beautifully animated and features a number of good, short sequences with Scrat the squirrel. The picture is straightforward and lacks surprises, but the outstanding voice cast of Ray Romano, Queen Latifah, Denis Leary and John Leguizamo makes it all worthwhile.

“Dawn of the Dinosaurs” is available as part of multiple home video releases. Extra features vary.

“Whatever Works” isn’t as rich or meaningful as writer-director Woody Allen’s best work. In fact, there are a number of moments that feel surprisingly forced considering Allen’s decades of experience as a filmmaker. Still, the good moments are very good, in large part because Allen has found a wonderful delivery man in comedian Larry David. He plays Boris Yellnikoff, a grumpy former college professor with an extreme superiority complex.

Boris is an unhappy soul, convinced the world is a cold and hostile place, until he meets Melodie St. Ann Celestine (Evan Rachel Wood), a sweet, twenty-something who winds up on his doorstep with nowhere to live. Boris takes her in and, despite the fact that he’s decades older, ends up marrying her.

Their relationship is an odd mix of abuse and co-dependency, as Boris clearly loves Melodie, yet he thinks nothing of insulting her intelligence and physical appearance. It’s a credit to David that his character comes across as conflicted and sad rather than repulsive. As rough around the edges as Boris is, there’s something likable about him, and David really gets this across on the many occasions that he is allowed to look at the camera and address the audience directly. While Boris is an acquired taste, Melodie is immediately lovable. Woods turns in one of the finest performances of her career by making Melodie a perky counter to David’s dry comic monotone.

DVD special features are limited to nothing but trailers, but the Blu-ray release of the film is equipped with BD-Live, allowing viewers to download exclusive extras.

Last year, Disney found a direct-to-DVD hit with “Tinker Bell,” the origin story of everyone’s favorite fairy. This year, Tink is back in another animated adventure that’s going straight to DVD and Blu-ray.

The action is again set in Pixie Hollow, where Tinker Bell is given the honor of creating the Fall Scepter, a celebratory staff used to replenish the pixie dust for all of the region’s fairies. Alas, she makes a mistake, breaking a rare and much-needed component of the staff. In hopes of correcting her error, she goes in search of a fabled magic mirror that will grant anyone who obtains it a wish.

“The Lost Treasure” isn’t as cleverly scripted as most big-screen animated films, but the visuals are astounding for a direct-to-DVD effort, and the story is certainly compelling enough for the children in the target audience. Here’s guessing Disney has another home video hit on its hands.

The movie is available on standard DVD and as part of a Blu-ray/DVD combo pack. Extra features include deleted scenes, a guide to Pixie Hollow (where Tinker Bell lives) and Demi Lovato’s music video for “Gift of a Friend.”

“Nothing Like the Holidays”: It’s been nearly a year since this movie played theaters, but I suppose Overture Films decided it was best to release the DVD around Christmas time. The dramatic comedy is centered on a group of family members who travel from around the globe to celebrate Christmas in their parents’ Chicago home. John Leguizamo, Freddy Rodriguez, Debra Messing and Alfred Molina star.

“Il Divo”: This is the story of infamous Italian Prime Minister Giulio Andreotti who was elected to Parliament seven times and considered “senator for life.” In 1991, scandals surfaced claiming connections with the Mafia and a conspiracy involving the Vatican. “Il Divo,” written and directed byPaolo Sorrentino, covers it all.

“Z”: Criterion Collection release of director Costa-Gavras’s 1969 drama about the slaying of a prominent Greek politician and the subsequent government cover-up. The film is loosely based on the real-life assassination of Greek activist Gregoris Lambrakis. Presented in French with English subtitles.

“The Guardian” — The First Season: Legal drama starring Simon Baker (“The Mentalist”) as Nick Fallin, an influential attorney who finds his true calling after getting busted on drug charges. Fallin is ordered to do 1,500 hours of community service and learns the value of working with the underprivileged.

“The Prisoner” – The Complete Series: All 17 episodes of the late ’60s British TV show that combined elements of science fiction, allegory and psychological drama. Co-creator and star Patrick McGoohan plays “Number Six,” a superspy who learns that retirement isn’t an option.

“Mannix” — The Third Season: This Los Angeles-based detective series ran eight seasons, from 1967 to 1975. The focus is on Korean War vet Joe Mannix (Mike Connors), a private investigator known to defy orders, rebel against technology and act like more of a maverick than Sarah Palin.

Politically themed documentaries by Docurama Films: Docurama is delivering four political documentaries this week. They are “Virtual JFK: Vietnam if Kennedy Had Lived,” “Soldiers of Conscience,” “Lioness” and “Election Day.” “Virtual JFK” asks whether the U.S. would have been in Vietnam had Kennedy survived? “Soldiers of Conscience” considers how eight American soldiers deal with the morality of killing in war. “Lioness” tells of five women on the front lines in the Iraq War. And “Election Day” focuses on the November 2, 2004, election and 11 American citizens who were determined to make their votes count.

“The Rise of Monty Python — The Other British Invasion”: This two-disc set includes two documentaries on the beginnings of the Monty Python troupe.