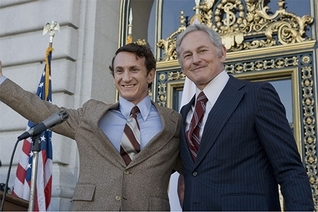 It’s difficult to imagine a film ending with a double homicide as uplifting, but “Milk” is exactly that.

No, it isn’t a spoiler to say that San Francisco supervisor Harvey Milk (Sean Penn) and Mayor George Moscone (Victor Garber) were murdered on Nov. 27, 1978, by former supervisor Dan White (Josh Brolin). For West Coast residents, the events are common knowledge, and director Gus Van Sant structures his film with that in mind. Although “Milk” chronicles Harvey Milk’s rise as a gay activist and one of the first openly gay politicians elected to public office, the timeline is fractured and acknowledges the murders at the outset. The movie is also peppered with a Penn voiceover meant to reflect the politician’s mindset shortly before his assassination.