This week’s crop of new videos runs the gamut, with genres ranging from a lowbrow comedy to a 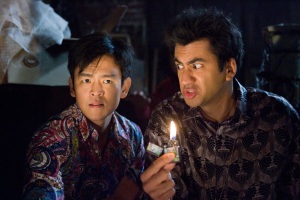 highbrow concert film. Not surprisingly, the quality of the movies varies as drastically as the content.

“Harold & Kumar Go to White Castle” wasn’t the sort of movie that begged for a sequel, but we got one nonetheless. As with the first flick, the action centers on the pot-loving party boy Kumar Patel (Kal Penn) and his more sedate pal Harold Lee (John Cho).

“Guantanamo Bay” is set just after the events in “White Castle,” with the boys headed to Amsterdam so Harold can hook up with his beautiful neighbor. Alas, Kumar’s attempt to smoke pot in an airplane lavatory convince authorities that both men are terrorists, and the next thing they know they’re in Guantanamo Bay.

Despite the film’s political content, the plotting and jokes are just as stupid and crude as in the first film. In fact, they’re probably stupider and cruder. There are a handful of funny moments — including a great bit when the boys meet President Bush — but the good parts are buried within an inconsistent and mostly unfunny, 107-minute narrative.

Fans of “White Castle” will appreciate the fact that Neil Patrick Harris — the best part of the first movie — is back with another cameo, but he doesn’t salvage the project.

The movie is being sold in multiple DVD editions, including a single-disc rated version and an unrated two-disc special edition. Extra features vary.

Never Back Down
3 stars
Available in rated and unrated versions. The theatrical cut received a PG-13 for mature thematic material involving intense sequences of fighting/violence, some sexuality, partying and language — all involving teens
Summit Entertainment
Available on: DVD, Blu-ray

Anyone seeking an introduction to sports movie cliches, should pop “Never Back Down” into a DVD player and take notes. The film features a troubled teen named Jake (Sean Faris) who must conquer inner demons before he can be the best possible athlete and win a beautiful girl named Baja (Amber Heard).

Set in the world of mixed martial arts, the movie contains lots of hand-to-hand … and foot-to-face … combat, plus the obligatory training sessions, where Jake works with a master fighter named Jean Roqua (Djimon Hounsou). Although Jake’s biggest enemy is himself, he finds a more tangible foe in Ryan McCarthy (Cam Gigandet), a hotshot fight club brat who torments him at every turn.

Because “Never Back Down” rarely strays from tried-and-true sports movie formulas, it’s not very inspiring, but it does work as a guilty pleasure. Maybe it’s the charisma of Faris and Hounsou or maybe it’s the fact that sporting events are packed with internal drama. Whatever the reason, “Never Back Down” transcends its predictability to offer a pleasant viewing experience.

The movie is being sold in both rated and unrated versions. Extra features vary.

Doomsday
2 stars
Unrated. DVD also has the option to play the theatrical cut, which was rated R for strong bloody violence, language and some sexual content
Universal
Available on: DVD, Blu-ray

This science-fiction adventure by writer-director Neil Marshall is stylishly made and filled with action, but that’s about all it has going for it.

The story takes place in a future United Kingdom, where Scotland has been quarantined because a deadly virus ravished the countryside. When the virus makes its way to England decades later, officials send a military team to the quarantine zone in hopes that survivors there know of a cure.

A talented soldier named Eden (Rhona Mitra) volunteers to lead the squad because her mother was left behind in Scotland. But what she and her comrades find is a hostile world filled with savages, most of whom have no concern for the outside world.

The action sequences are well staged and intense, and Mitra is credible as an action hero, but the plotting lacks zest. What’s more, Marshall’s homage to post-apocalypse thrillers like “The Road Warrior” is so blatant that it seems more like thievery than a tip of the hat.

DVD releases include both the R-rated theatrical cut of the film and an unrated version. Other extras include three making-of features and an audio commentary by Marshall and several of his cast members.

In 1978, director Martin Scorsese chronicled The Band’s farewell concert with “The Last Waltz,” and in 2005 he peered into Bob Dylan’s career with the critically acclaimed “No Direction Home.” Now, he has captured the Rolling Stones in action with an excellent concert picture shot in 2006 at New York’s Beacon Theater.

The film mixes current performance footage with archival clips from a variety of eras, and the contrast is fascinating and illuminating. It’s wonderful, for instance, to watch a twenty-something Mick Jagger speculate that his band is well positioned to keep going for at least another year right after watching the 60-plus Jagger rock the Beacon.

Much of the movie is dedicated to complete performances of Stones music, with both huge hits and lesser known tunes represented. There are also appearances by guest artists Jack White, Christina Aguilera and Buddy Guy. “Shine a Light” is a must for diehard Stones fans, but it is also recommended for anybody with an interest in classic rock ‘n’ roll.

DVD extras include bonus Stones performances and a behind-the-scenes featurette.

Lost Boys — The Tribe: Direct-to-DVD sequel to the 1987 vampire film “The Lost Boys.” Like the original, this movie focuses on bloodsuckers who haunt a California beach city.

War Games — 25th Anniversary Edition: The title says it all. Matthew Broderick and Ally Sheedy star in this now-classic 1983 suspense film about a computer hacker who inadvertently starts a global confrontation.

War Games — The Dead Code: Direct-to-DVD sequel to the above-mentioned 1983 thriller. This movie also focuses on a hacker who mistakenly inserts himself into a real-life war.

Tai Chi Master: A 1993 film starring Jet Li as a martial arts student who is stricken with grief when his longtime friend betrays him. Through the study of tai chi, he recovers. Also stars Michelle Yeoh.