Video Verdict: ‘The Conjuring,’ ‘The Internship,’ ‘Before Midnight’ 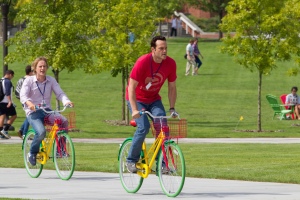 In “The Internship,” Owen Wilson, left, and Vince Vaughn play middle-aged guys gunning for a job at Google.

Three solid films – each distinctly different from the next – make this a particularly good week for home video.

4 stars (out of four)
Rated R for sequences of disturbing violence and terror
Warner Brothers
Available on: DVD, Blu-ray, digital download and on demand

As a genre, horror films are often scorned and labeled as inferior to more traditional dramatic fare. This is a reaction, no doubt, to the fact that low-quality horror films are a staple of commercial cinema. The truth, however, is that genre has little to do with the overall quality of a movie.

The right artists can make a horror movie just as substantial and emotionally rewarding as a period drama, and “The Conjuring” demonstrates that fact nicely. The movie is the result of years of work by producer Tony DeRosa-Grund, who assembled an ideal team and delivered a horror movie that can be favorably compared to classics like “The Exorcist,” “Rosemary’s Baby” and “Psycho.”

The story is centered on the exploits of real-life paranormal investigators Ed and Lorraine Warren, and it specifically focuses on a 1971 case where they claim to have helped a family living in a haunted, Rhode Island farmhouse. The movie starts by establishing the Warrens (Patrick Wilson and Vera Farmiga) as experts on the supernatural, then shifts focus to the Perron family, who have moved into a new, country home.

Although the Warrens are used to dealing with cases that have scientific explanations, they immediately determine that the Perrons are in need of an exorcist, and that it is necessary to document the unusual happenings in order to obtain help from the Catholic Church. As the story moves forward, the family faces events so terrifying that they shake even the Warrens.

Director James Wan, best known for creating the “Saw” franchise, delivers his finest work to date. Instead of relying on the graphic, slasher-style techniques that made “Saw” a hit, Wan turns to old-fashioned suspense, and the payoff is big. “The Conjuring” is scary because viewers can identify with the characters and their seemingly hopeless situation.

The script, by brothers Chad and Carey Hayes, is outstanding, and Wilson and Farmiga give the material a substantial reading. The supporting cast is terrific as well. Taylor’s portrayal of Carolyn Perron is fantastic, and Ron Livingston is very good as Carolyn’s firm and loving husband.

Whether there is any truth to the story behind “The Conjuring” is up for debate, but the movie is spooky no matter how one feels about the possibility of real-life demons.

DVD extras are limited to a bit where Wan talks about making scary movies. The Blu-ray release has this extra, plus shorts about real-life happenings that inspired the movie

Any review of “The Internship” needs to immediately address one point. The movie is essentially a two-hour advertisement for Google. Those who hate product placement and the fact that one of America’s most prominent tech companies has discovered yet another way to worm its way into the public consciousness will hate everything about it.

However, if one is able to move beyond the blatant commercialism and focus on the story behind the ad, they will find an often-funny, surprisingly sweet tale that takes full advantage of the chemistry between stars Vince Vaughn and Owen Wilson.

Vaughn wrote the screenplay with Jared Stern, and he stars as Billy McMahon, a middle-aged watch salesman who, along with his buddy Nick (Owen Wilson), is left unemployed when his company closes. Disheartened, Billy and Nick take a summer internship at Google hoping they are lucky enough to turn it into a full-time job.

They have their work cut out for them because the Google program pits teams of interns against one another, with only members of the top team guaranteed employment. Since most of the newbies are tech savvy and youthful, Nick and Billy are outsiders who are forced to sell themselves to both the Google brass and their own teammates (Dylan O’Brien, Tiya Sircar and Tobit Raphael).

Nick’s and Billy’s chances for success are slim, and that makes them easy to root for, particularly since Vaughn and Wilson are such charismatic performers. Director Shawn Levy (“Real Steel,” “Night at the Museum”) paces the movie well, and the gags are more consistent than those in most Hollywood comedies. That makes the film an enjoyable diversion despite the fact that the story arc is simplistic and predictable.

“The Internship” doesn’t hit the highs of Vaughn’s and Wilson’s last joint project, “Wedding Crashers,” but it checks enough boxes to work.

DVD and Blu-ray extras are highlighted by an audio commentary with Levy.

With “Before Midnight,” writer-director Richard Linklater and actors Ethan Hawke and Julie Delpy continue one of the most interesting projects in film history: a movie franchise based almost entirely on simple conversations between a woman and man.

The movie is a sequel to “Before Sunrise” and “Before Sunset,” romantic dramas that introduce viewers to Jesse (Hawke) and Céline (Delpy), a couple who find instant attraction after meeting on a European train. Jesse, an American, is headed to Vienna for a flight home, and Céline is travelling to her home nation, France, for school. Jesse convinces Céline to disembark in Vienna where the two spend the night walking the city, chatting and making a connection.

“Before Sunset” was made – and is set – nine years later, and the movie reveals that Jesse and Céline failed to reconnect during that lengthy stretch. Still, their original meeting affected them both deeply. In fact, Jesse used the experience as inspiration for a novel, and Céline seeks him out when he shows up in Paris for a book-signing event. Although both are involved in other relationships, they again talk for hours and it becomes clear that their attraction has only strengthened.

“Before Sunset,” like the original film, ends on a question mark. This, no doubt, left fans debating where the next chapter of their lives would go. With “Before Midnight,” the debates can cease. The movie, which is again spaced nine years from the last, reveals that Jesse and Céline finally acted on their attraction and have remained together for years.

The two are raising beautiful twin daughters and spending the summer in Greece, but the fact that they have settled down does nothing to diminish their conversations. Love is never as simplistic as we might hope, so there’s plenty of territory for Jesse and Céline to explore, only this time they do so as an aging and familiar couple.

“Before Midnight” walks the same territory as director Judd Apatow’s 2012 comedy “This Is 40,” meditating on the challenges couples face in middle age. “Midnight,” however, is considerably smarter than the latter film, which is more concerned with off-color jokes than capturing the intricacies of life.

Linklater wrote “Before Midnight” with Hawke and Delpy, and the screenplay does a fine job examining both the sweet and sour sides of love. The only disappointment is that Céline is presented as more neurotic than she was in either of the previous movies. Although this adds conflict, it wasn’t necessary because watching Hawke and Delpy do their thing is a joy even when the characters are getting along.

Making a movie with nothing more than smart dialogue and fine performances is a dying art, but Linklater, Hawke and Delpy remind us that it’s a skill worth saving.

DVD and Blu-ray extras include a Q&A session and audio commentary featuring Hawke, Delpy and Linklater.

“The Vincent Price Collection”: Scream Factory, a sub-label of Shout Factory, specializes in spooky movies, and this multi-disc set is one of its best. The collection contains six movies from horror master Vincent Price: “The Fall of the House of Usher,” “The Abominable Dr. Phibes,” “The Pit & the Pendulum,” “Witchfinder General,” “The Masque of the Red Death” and “The Haunted Palace.” The collection also includes many extra features, including an audio commentary for each film.

“Dead in Tombstone”: Direct-to-video action film about a gang leader (Danny Trejo) who is killed by his own men and sentenced to damnation. Before he starts to burn, Satan (Mickey Rourke) offers a way out. The man can save his own hide by returning from the dead and claiming the souls of the men who betrayed him for the devil. Directed by Roel Reiné.

“The Uninvited”: Fresh digital restoration of director Lewis Allen’s 1944 picture about a brother and sister who move into a haunted house. Ray Milland and Ruth Hussey star.

“Kindred – The Embraced” – The Complete Series: For Paramount, Halloween seemed like the right season to bring this short-lived vampire-themed TV series to DVD. The show, which received an eight-episode run in 1996, centers on a San Francisco Police detective (C. Thomas Howell) who discovers that his city is home to several dangerous vampire clans.

WWII – 3-Film Collection: This set features three dramatic TV specials that initially aired on the History channel: “WWII in HD,” “WWII in HD: The Air War” and “WWII From Space.”

“I Give it a Year”: “Borat” scribe Dan Mazer makes his feature film directing debut with this romantic comedy about a young couple (Rose Byrne and Rafe Spall) who are doing their best to stay married despite the doubts of their friends and relatives.

“Just Like a Woman”: Story of two women (Sienna Miller and Golshifteh Farahani) who take a road trip together in hopes of escaping the troubles of their day-to-day lives. Directed by Rachid Bouchareb.

“The Wall”: Austrian drama about a woman (Martina Gedeck) who is cut off from the outside world by an invisible wall. Suddenly, she and her dog must survive in a land ruled only by natural law. The movie, which has options for English or German audio tracks, was selected as Austria’s foreign film entry in the forthcoming Academy Awards. Co-written and directed by Julian Pölsler.

“Barbie & Her Sisters in A Pony Tale”: The latest animated Barbie film from Universal Studios. In this adventure, Barbie and her sisters travel to a riding academy in the Swiss Alps and have fun interacting with the horses.

– Forrest Hartman is an independent film critic whose byline has appeared in some of the nation’s largest publications. E-mail him at Forrest@ForrestHartman.com.forrest@forresthartman.com.

4 responses to “Video Verdict: ‘The Conjuring,’ ‘The Internship,’ ‘Before Midnight’”